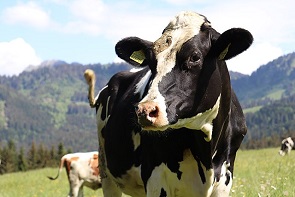 The disruption of the cow means that one by one, all products that we now derive from the cow, will be substituted by ‘superior, cheaper, modern alternatives’, produced by precision fermentation (PF) from vegetal feedstock. This will have a deep impact on the livestock sector, ‘which has all but reached its limits in terms of scale, reach, and efficiency.’ And has very low margins on top of that. If hit by a breakthrough technology, the sector will not be able to survive, except for luxury products. And we seem to be on the brink of such a development now. Not just cattle will be hit. Other livestock like pigs and chicken will be affected as well. But cattle farmers will be hit first, because among these animals, the cow is the most inefficient transformer of vegetal into useful animal products. Therefore, cost parity by PF will first be reached with milk and the steak, and only later with the chicken fillet and the cutlet.

The RethinkX report writes about these changes with its characteristic rhetoric. Says the executive summary: ‘We are on the cusp of the deepest, fastest, most consequential disruption in food and agricultural production since the first domestication of plants and animals ten thousand years ago. This is primarily a protein disruption driven by economics. The cost of proteins will be five times cheaper by 2030 and 10 times cheaper by 2035 than existing animal proteins, before ultimately approaching the cost of sugar. They will also be superior in every key attribute – more nutritious, healthier, better tasting, and more convenient, with almost unimaginable variety. This means that, by 2030, modern food products will be higher quality and cost less than half as much to produce as the animal-derived  products they replace.’ 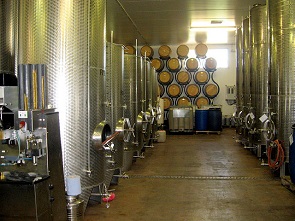 Disruption of the cow through precision fermentation

Precision fermentation, used here, is a process performed by microorganisms. Biotechnology now allows us to tweak them in such a way that they can produce almost any complex organic molecule from vegetal feedstock. These ‘recipes’ can be stored in databases, ‘molecular cookbooks that food engineers anywhere in the world can use to design products in the same way that software developers design apps.’ RethinkX therefore calls this new model of production ‘Food-as-Software’. Such recipes can be developed continuously and copied anywhere in the world. This will give rise to a completely decentralized production system. Fermentation farms can be located anywhere, preferably close to their customers in towns and cities.

According to RethinkX, this disruption of the cow will proceed in four steps (p.25).
1. Substitution of animal-derived ingredients with those made by modern production methods. This will take place behind the back of the consumer.
2. Substitution of end products. Either by substitution of proteins, the key ingredient; or by making well-known products, using PF methods.
3. Fortification. The enrichment of existing food products with PF-produced ingredients.
4. Form factor. The replacement of existing forms of food with entirely new forms.
All these disruptions overlap, reinforce, and accelerate one another. And all of them will affect cow husbandry. Because of the low margins, new production methods only need to disrupt key ingredients, not entire products, in order to render the cow redundant. ‘Ultimately, all industrial agriculture is volatile, low margin, and inefficient and will be bankrupted as a result of high cost of production and displaced demand’ (p.38).

Developments such as the disruption of the cow will have many and very diverse effects.
– Sustainability. ‘The far greater efficiency of PF technology means that its products typically require less than one tenth of the cropland of their animal-derived alternatives. In the case of cattle, current research suggests that a PF-enhanced burger will use 94% less land than equivalent beef or dairy products’ (p.48). And 87% less water, largely because of the reduction in irrigated crops necessary per unit of output (p.52).
– Environmental quality. ‘Industrial animal agriculture is a major contributor to many pressing environmental problems, including climate change, deforestation, soil erosion and degradation, water pollution, local air pollution, habitat and biodiversity loss, and stratospheric ozone depletion’ (p.51). Modern food production will help greatly to restore the global environment.
– Greenhouse gas emissions. Even taking into account emissions by the new PF industry, net emissions from the sector may be reduced by 45% in 2030 (p.50). On top of that, actively reforesting the land freed up by the ‘modern food disruption’ may offset all greenhouse gas emissions; even at the current level, not taking into account emission reductions because of changes in energy and transportation (p.52).
– Antibiotic resistance. About 80% of global antibiotic use is for livestock. Reduction of livestock production will slow down the pace of antibiotic resistance (p.53).
– Leather. With modern technology, we can produce artificial leather as good as the natural product.
– Health. Modern food production allows for the customization of proteins and end products. It therefore represents an opportunity to maximize beneficial nutrients and minimize harmful substances (p.54).
– Transparency. The authors expect a far more transparent food chain (p.56).
– Wealth and wealth distribution. The modern food industry will produce cheaper foods. It will therefore add to disposable income. And with the new technology, low-income countries will become able to produce low-cost, high-quality food themselves. This will bring increased food security to them (p.56/7). 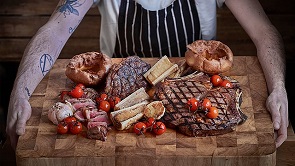 In the future, we may produce steaks along entirely different technologies. Photo: Lyricall, Wikimedia Commons.

But there will be also be losers from the disruption of the cow. The agricultural sectors in the US, the EU and Brazil are particularly vulnerable to the coming changes. A large portion of their agro-economic model is based on livestock production. If the RethinkX project is right, meat markets may shrink fast, causing a dramatic loss of income for livestock farmers. These are in a vulnerable position already. Margins are low. If just one of the markets on which they sell their products (e.g. leather, or ground beef) would be affected by PF products, farmers might already run into difficulties. They will be forced to raise prices, whereas their competitor is still developing and will probably be able to produce cheaper next year. Out of this, conflict may arise. The livestock farming sector might to try to influence consumers ‘through scare stories, pseudo-science, and other tactics that try to cast doubt on the benefits of modern food’ (p.63).

The RethinkX authors judge that the disruption of the cow is going to take place anyway. But policymakers, investors, businesses and consumers can speed up or slow down the adoption of the new technologies. On the whole, the authors judge that changes will be for the good. Consumers will be able to buy cheaper and healthier food. And policy makers can stimulate the economic, health, social and environmental benefits of this development.

Costs of precision fermentation are still falling. The technology will impact markets even before it has reached price parity. And everyone may benefit. Any country can step in. The report ends with five pages of recommendations. But: ‘only by breaking out of the agriculture system of the first domestication of plants and animals can we hope to ensure a food supply that is abundant, accessible, healthy, inexpensive, and nutritious, without the destructive environmental impact of our current system’ (p.63).

Interesting? Then also read:
Biotechnologically produced food: positioning and profit margin
Antibiotics resistance, and how to overcome it
Circular agriculture, the model of the future