Bitumen is a by-product of oil production and is used to bind the surfaces of paved roads. Some researchers, concerned about its environmental impacts and future supply if petroleum refining slows down, have started to develop alternatives: bio-bitumen. 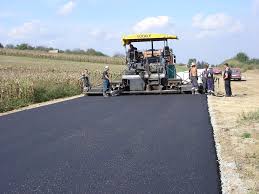 If less bitumen is to be produced from oil refineries, bio-bitumen will be able to fill the gap. Photo: Wikdia Commons.

An alternative to fossil-based bitumen

Every year the EU produces around 15 million tonnes of bitumen. Most of this is mixed with aggregates such as crushed rock, sand and gravel to create asphalt – the sticky bitumen binds it all together – to build roads. Around 90 per cent of all paved roads are surfaced with asphalt and in the EU more than 200 million tonnes of this composite material is produced annually. Bitumen is a very thick liquid form of crude oil. It does occur naturally, but the stuff used as a binder in asphalt is a by-product of oil refining.

In the Netherlands there are now test bio-based roads and cycle paths, paved with a bitumen-like product made from the natural binder lignin. These include a section of road on an industrial site – used daily by cars and heavy trucks, some minor roads, and a cycle path at Wageningen University & Research, which is in three sections, each produced using a different lignin-based bio-bitumen. ‘We already built eight demonstration roads in the Netherlands with this type of new binder, so 50% lignin, 50% bitumen,’ explains Richard Gosselink, from Wageningen Food & Biobased Research. ‘We now have four years’ experience with that and it looks very good.’ 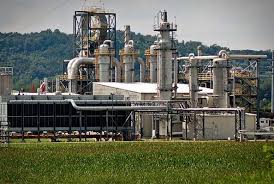 Bio-bitumen will be produced from biorefineries. Photo: Wikimedia Commons.

Lignin is a structural polymer in plants and trees that is released as a waste product from a number of industrial processes. The Dutch demonstration projects use lignin from various sources, including different types of paper pulp production and a bio-refinery that produces cellulosic ethanol from straw. The bio-based asphalt binders were created by blending the different lignins from the various waste streams to achieve the required properties. Gosselink says that on the demonstration roads, the material appears to be performing in a similar way to standard bitumen, ‘although we see that they have a slight noise reduction.’ But he adds that they need to monitor the roads for the normal lifetime of asphalt, which is 10–15 years. ‘Normally after 10 years you would have some damage, which leads to some maintenance,’ Gosselink explains. To get beyond 50% bio-based they will need to chemical modify some of the lignin, Gosselink explains, but he is confident that 100% bio-based bitumen is possible. ‘The question is: will it only be with lignin or do we also need other bio-based components alongside it,’ he says.

There are also some other bio-based alternatives on the way. Last year a team from Aston University, in Birmingham in the UK, developed a process to break down the organic part of household waste – food waste, plastic, paper and textiles – to produce a sticky, gloopy black liquid that is very similar to bitumen. ‘Right now we are consuming a huge amount of bitumen for road construction,’ says Yang Yang, an expert in pyrolysis and bioenergy at Aston University. ‘However, it’s not renewable and we are looking into some alternative binders to replace or reduce the consumption of the petroleum based-bitumen.’ The researchers produced the bio-bitumen by heating the waste to around 500°C in the absence of oxygen. This process, known as pyrolysis, is the same as that used to make charcoal and biochar, and is often used to produce biofuels. By changing the processing parameters – such as temperature, processing time and product collection strategy – the team were able to alter the characteristics and quantities of the final bitumen-like substance.

Another issue highlighted by Yang’s colleague Yuqing Zhang, is that in future the use of petroleum is likely to decline as renewable energy production increases. ‘We are trying to address the gap in the future and we are trying to utilise the waste and the biomass to make road production greener and more eco-friendly,’ Zhang says. As it utilises waste, the team also expect their bio-bitumen to be cheaper than conventional bitumen. At the moment, you would need to blend it with conventional asphalt binders for road applications, but the researcher believes that by tweaking the process and working on different blends from different raw materials they can produce a 100% bio-based bitumen. And they have had some interest in their bio-based binders from Highways England, which operates and maintains England’s major roads, and a couple of UK city councils.

Hugo Silva, from the Centre for Territory, Environment and Construction at the University of Minho in Portugal, has also been researching bio-bitumen, investigating the use of waste heavy oils from pyrolysis at bio-fuel refineries as asphalt binders. He says that as well as conventional bitumen, plastic polymers – both bio-based and petroleum-derived – can be added to the mix to modify bio-bitumen. ‘Polymers can improve the performance and so we can use higher amounts of those oils from the bio-derived sources,’ he explains. Silva believes that bio-bitumen has the potential to be more environmentally friendly than current asphalt binders, but says that it is important to ensure that they are durable. He explains that any environmental gains in the production process will be lost if the asphalt binder has to be replaced and repaired more frequently. But he is confident that this is possible. Like Yang and Zhang, Silva envisages a future were bio-refineries produce both bio-fuel and bio-based asphalt binders.

Originally published on the site of AllThingsBio.