You are here: Home / 2018 / March / Bio concrete and other construction materials from local resources

As global housing programs are gearing up, the world will need a staggering amount of construction material over the next few decades. This will put a strain on resources, and produce a lot of CO2; unless we discard the present one-size-fits-all approach to materials use (on the basis of Portland cement) and develop local and low-energy construction materials, tuned to specific construction requirements. Like bio concrete. 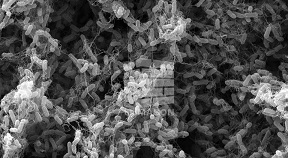 In a first article on the construction business, we mentioned that cement production on its own produces as much as 5% of global CO2 emissions. And the construction industry emits additional amounts of CO2 due to mining and transport of materials, energy use due to the construction itself, and to demolition and recycling. Therefore, we discussed the development of innovative kinds of concrete, that can deliver results comparable to concrete based on Portland cement, but with up to 93% lower CO2 emissions over the production chain. Surprisingly, the basis for this concrete was laid in antiquity, for its formula was inspired by Roman and Egyptian concrete that still stands. The ‘green cement’ from which this concrete is made, may be based on local resources, lending some flexibility to the construction industry.

The most radical solutions in this field make use of the activity of bacteria to produce bio concrete. With bacteria, the resources might be little more than sand as the source of silicate, and limestone as the source of calcium, both available in large quantities throughout the world. The North Carolina start-up company Biomason grows bricks from these materials on an industrial scale. The company has won major prizes and funding for its bricks. Its process begins with sand. This is placed into moulds and inoculated with Sporosarcina pasteurii bacteria, which are then fed with calcium ions suspended in water. The ions are attracted to the bacterial cell walls, creating a calcium carbonate shell which causes sand particles to stick to each other. A single bacterial brick takes two to five days to grow, compared with three to five days to make a kiln-fired version. But the bacterial action can produce unexpected effects in bio concrete, unachievable by industrial methods. ‘We can make bricks that glow in the dark, bricks that absorb pollution, bricks that change colour when wet,’ Ginger Dosier, the company’s founder, told Wired Magazine. 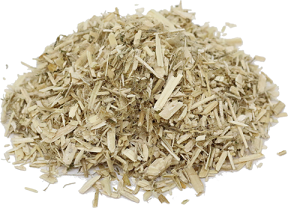 Peter Trimble, a design student at the University of Edinburgh, made bio concrete from sand and the same kind of bacteria, calling it ‘Dupe’, a ‘living alternative to concrete’. He added an ingredient: urea, derived from urine, as a nutrient for the bacteria. From this bio concrete, he succeeded in manufacturing a stool with around 70% of the compression strength of ordinary concrete. This may be sufficient for purposes like emergency housing. ‘Imagine a Tsunami-hit farm in Indonesia that is not getting supplies,’ Trimble told CNN in 2014. ‘You could use sand and bacteria on site, practically free, and have shelter housing that is far more permanent…. Once you have the basic framework it should be transferable.’ Moreover, this bio concrete is biodegradable – which may also mean however that it can only be used for temporary structures. At the time, Trimble worked with NGOs to apply Dupe to Aboriginal settlements and to insecure regions of Morocco. But equally, one could imagine this process to be used for high-quality purposes like building settlements in deserts, or even constructing them on Mars. Another biobased construction material might be mycelium, the ‘roots’ of mushrooms, as manufactured by Ecovative, a company about which we wrote a few years ago. They use neutral agricultural waste, like straw or chaff, as the substrate on which they grow their mycelium.

Many concrete formulae, for specific purposes

And now MIT has joined the forces looking for alternatives to traditional concrete. It uses finely ground volcanic ash as a binder, as has been found in ancient Roman structures by a team of the University of Utah. Volcanic ash lies in ample supply around active and inactive volcanoes around the world; some volcanic ashes have intrinsic, ‘pozzolonic’ properties: in powder form, the ash can naturally bind with water and other materials to form cement-like pastes. ‘You can customize the composition of the paste and vary the proportion of volcanic ash and Portland cement,’ says Oral Buyukozturk, who headed the MIT research team. ‘A traffic block for example will not require as much strength as, say, a high-rise building. So you could produce those things with much less energy.’

Alex Moseson, one of the scientists involved in the Drexel University research on the ‘green cement’ inspired by the old Egyptians, wrote us that with his work, he ‘aimed to develop green cements to improve lives in slums and rural communities. While I was in India, I developed three green cements which were independently tested to pass key tests of the equivalent of the key ASTM C1157 standard, respectively achieving strengths of 33, 43, and 53 MPa at 28 days.’ The team with which he helped developing this green cement had three key innovations, he told us. The first: using a high proportion of ‘raw’ fine limestone, i.e. limestone that has not been through a kiln. To this must then be added a binder; in industrial countries likely candidates are finely granulated blast furnace slag (rather limited in supply) or coal fly ash (much more available). The second innovation: ‘we based our approach to green cements on creating formulae for clients with their preferred feedstock and specifications. That makes our work less a secret Coca Cola formula (constant and stealable), and more like a San Francisco Sourdough Bread (flexible and always unique). Third, we developed cements which could be used as direct replacements for Ordinary Portland Cement (OPC), without the need for liquid activators, or high heat like some competitors.’ He elaborated on these subjects in his thesis.

So, with the right incentives in place (like the desire to emit less CO2 or to use local resources as much as possible, or sheer lack of resources), there seems to be a lot of opportunities to develop local varieties of concrete, each tuned to a specific task. Not exactly to build skyscrapers – but then, the requirements for concrete properties may vary widely dependent on its function. And in developing countries, the perspective on good housing might be different from that in industrial countries. ‘There are indeed obstacles to be faced: regulation, scale, etc.,’ says Moseson (he did not say, but the construction industry is well-known for its resistance to change). ‘But with the right partner, it would be worth overcoming them.’