If we could really succeed in establishing a sustainable production chain of concrete, it would be more effective and cheaper than solar and wind power. An example of the potential of green building for the environment and a sustainable society. Therefore, green building is not just about energy and resource conservation, but at least as much about the use of sustainable materials.

Linnaeusborg at Groningen University, equipped with a green roof and heated geothermally.

Sustainability in the building trade

It is difficult to turn the construction trade into a green direction. Green building is problematic because of the conservative attitude of corporations and intermediary organisations. Cement industry by itself produces 5% of all CO2 emitted by mankind. Mainly because the reaction requires a temperature of 1500 degrees. Therefore, a more sustainable cement process is difficult to achieve; and with that, the sustainability of the entire building trade poses problems. Architects and designers with new materials in mind might be motors of change, as the intermediaries between contractors and builders. At any rate, the establishment of a more innovative and greener building trade is long overdue. At least the Netherlands lags far behind in the area of sustainable homes and buildings. I recall how at a conference, a few years ago, a representative of a large construction company stood helpless before his audience and said: ‘I do not know either and I had hoped that you could help me.’

Taipei 101, an iconic green building, not just because of its height (508 m) but also for its very good energy and water efficiency.

And yet, there is change to come. The Dutch government, aware of the stalemate in green building, set up a program for the building trade. The organisational model is the same as that for promoting the biobased economy. Government turned to construction companies with questions like: ‘What are the obstacles for green building?’ And: ‘What could government and the building trade offer each other?’ There are projects is areas like digitalisation, energy conservation and private energy production, new materials, social and demographic developments, new business models and funding mechanisms and internationalisation. One of those projects is ‘WoonConnect’.

At a recent meeting in The Hague, a case for a radically new approach for new constructions and existing buildings (WoonConnect) was made by Nico Baken, CTO Office at KPN and professor at Delft Technical University, and Aart Wijnen, CEO of ‘De Twee Snoeken’ architects in Den Bosch. They developed a virtual house or building in the form of a comprehensive digital library, applicable to all houses of buildings (‘up to the last nail’), accessible to CAD applications for all participants in the construction process. It also allows the ultimate user to have more say (‘build the house of your dreams’). Aart Wijnen mentioned the so-called Da Vinci house as an example, a low-cost house that can be constructed in multiple ways. The model incorporates all likely restrictions and all possible options and allows for the calculation of the energy score, including the application of solar panels. It includes better sustainability and comfort (often, people are not interested in sustainability, but they are interested in comfort, for instance to Live Longer Comfortably at Home). Rent, energy cost and payback times in existing homes are also included. This ‘library’ is accessible to all parties, and also offers opportunities for occupants’ participation. Cost reduction for new construction may be as high as 40%, and for renovation up to 50%; whereas sustainability can be assured, according to the developers. Macro parameters for houses and buildings, from energy score to circularity score, can be calculated at once, real-time, from the known elements of the house which are defined in great detail. 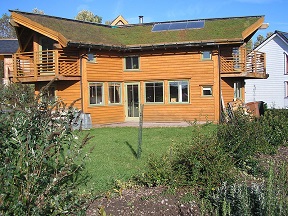 An eco-house at Findhorn Ecovillage with a turf roof and solar panels.

Green Deals in the construction trade

Government and the building trade have made some Green Deals. One of them is ‘Biobased Building’, intended to create a level playing field for biobased materials in the construction trade. An example of a material that so far has been unsuccessful in the market, is that of biobased façade panels produced from side streams of aubergine cultivation. A second Green Deal is ‘Better sustainability in the concrete chain’, in particular with regards to CO2 emissions. That production chain urgently needs such an approach, as mentioned; therefore the calculation of LCAs for concrete chains are an important element in this Green Deal. Cement production has a large impact on the environment; the best solution would appear to be a trading price of € 50 per ton of CO2. Of course not just for the construction trade, but for the entire economy. Then sustainable construction materials will become competitive. But who will set that price? Everyone has CO2 ambitions, but there are no targets (yet). At present sustainable procurement is totally ineffective, as one of the participants remarked. And yet, 30 companies (20% of the Dutch building sector) participate already in the Green Deal.

A third Green Deal ‘Sustainable Civil Engineering’ aims at establishing a better process management in construction projects and areas, e.g. by involving tenants and owners right from the start. There is a need for the introduction of these angles in education (‘building workers too, need to know about the climate’), communication and resource supply. A fourth Green Deal is about ‘Circular Building’. Some 45 partners are involved already. The idea is to assure the circularity of a building by issuing a construction or resource passport to each building in order to calculate its degree of circularity. ‘One might imagine that this could increase the value of a building.’ And just recently, the ‘Green Roofs’ Green Deal has started. The advantage of the Green Deals is that government and companies can have open talks on sustainability and ways to accomplish it, in a climate of mutual trust

At least, something is moving in the Dutch building sector. As stated before: often, companies do want to change, but do not know how. But change is coming. The building crisis has brought the trade to a virtual standstill, but better sustainability for existing homes and building could imply a major investment. Political party D66 recently proposed to spend at least € 100 million in sustainable retrofits of existing homes and schools. The building library developed by KPN and De Twee Snoeken could be a handy tool in such a process towards green building, provided it would contain enough sustainable construction materials. This could lead to a complete inventory, a digital genome of our cities. First that of houses and buildings, and later of public space; as the basis for all innovations in our human environment.