You are here: Home / 2019 / August / Strongest natural material ever found

The strongest natural material ever found is part of, surprisingly, a mollusc. Its name is Patella vulgata, or in everyday language, the common limpet. An edible sea snail found all around European coasts. The material in question is part of the ‘teeth’ with which the animal rasps over rocks in order to feed on algae. It consists of a protein reinforced with nanofibers of goethite, an iron-bearing mineral named after Johann Wolfgang von Goethe. 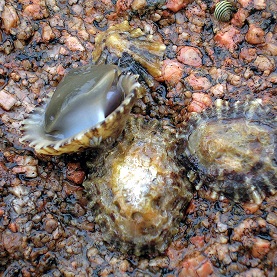 This material was described in an article published in 2015 by Asa Barber and colleagues of the university of Portsmouth. Their measurements showed that the strength of the material was higher than that of spider silk, until then considered to be the strongest natural material. The limpet teeth contain a remarkably high proportion of the reinforcing goethite nanofibers. That leads the authors to suggest that the natural design in these teeth is optimized towards theoretical strength limits. Quite remarkable for nature to be so successful as an engineer!

Strongest natural material, it even remains sharp as it wears down

Limpets live in tidal zones along European coasts. Their hard shells protect them from physical damage, predation and dehydration. About half of the time they live above the water level. As they are submerged, they can ‘walk’ while grazing the rock, covering distances up to a metre and a half. But they always return to their resting places. Apparently they leave a slimy track as they move, that they can identify as belonging to themselves. Often, their shell is perfectly adapted to their resting place. Therefore, they can attach themselves to the rock perfectly by creating a vacuum, retaining the sea water within their shells and only opening up again as they are submerged. In this way they can even withstand the pounding of major waves.

John Videler, an emeritus professor of Groningen university, also studied limpets and this strongest natural material. Videler was a professor in bionics and explores, in his article, how the shape, internal structure, wearing pattern, feeding position, and distribution of hardness and elastic properties of these teeth can help us design better industrial cutting devices. He notes that the limpet’s teeth are curved, which implies that the forces exerted on the teeth do not entirely end up at the tip of the tooth, but are distributed along the entire structure. Moreover, the goethite crystals in the limpet’s teeth have a sort of roof tile structure. Inevitably, the teeth wear down as they graze the rock; but this is done by discarding the front row of crystals, exposing the next row. In this way, the teeth remain sharp even as they wear down. Videler went to a manufacturer of teeth for sand cutters and suggested them to use these mechanisms for a better cutter design. But, as he tells the Dutch newspaper NRC Handelsblad, they turned him down. ‘If they would live longer, we would sell less,’ they told him. The old, but always flawed argument for planned obsolescence. Hopefully their competitors will pay more attention to the lessons of nature.