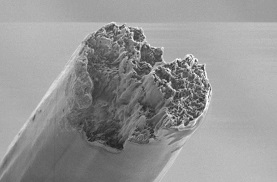 The team, headed by Nitesh Mittal, recently published its results in ACS Nano. The material they developed is both strong and lightweight, which would allow it to substitute metals and plastics in products like aeroplanes, cars and furniture; and because it is biocompatible, biomedical applications may also be in the offing. The material consists principally of cellulose nanofibrils of just 2 to 5 nanometres thickness and about 700 nanometres in length (a nanometre is a millionth of a millimetre). The nanofibrils suspended in water are force-pressed through a channel just 1 mm wide, and oriented parallel though a smart supply of pure, and of slightly acid water. The fibres, compressed in this way, adhere to each other by Vanderwaals forces, that apply to particles at the nano scale. The researchers have succeeded in producing threads up to 15 micrometres thickness, and several metres in length, says researcher Stephan Roth. The researchers could monitor the process in the X-ray equipment of the German institute DESY, where they could observe precisely how the threads formed.

Of course, a lot development work needs to be done before the still unnamed material can come to the market. But if industrial production would succeed, many applications may lie ahead. The material has a stiffness eight times that of spider silk, and a tensile strength several times higher. It can be woven, and then be processed to materials with unique properties, materials stronger than glass fibre composites or steel cables. The researchers estimate that production costs will be comparable to those of other synthetic strong materials. Moreover, this strongest biomaterial will still be biodegradable, being made just of cellulose. ‘We can now transform the super performance from the nanoscale to the macroscale,’ says researcher Söderberg. It opens the way for developing nano fibre materials that can be used for larger structures while retaining the nano fibres’ tensile strength and ability to withstand mechanical load. ‘This discovery is made possible by understanding and controlling the key fundamental parameters essential for perfect nano structuring, such as particle size, interactions, alignment, diffusion, network formation and assembly.’ The process can also be used for the production of structures from carbon nano fibres, for instance.

‘The quest for more eco-friendly and energy-efficient technologies accentuates the need to develop lightweight structural materials with exceptional mechanical performance from renewable resources,’ as the authors write in ACSNano. Nature has developed building blocks with excellent properties, so they continue, well ordered at the nano and molecular scales. ‘Lately, scientists have been seeking ideas of mimicking natural materials’ architecture based on engineering design principles, typically called ‘bioinspired assembly’. An overarching challenge in structural materials fabrication is to translate the extraordinary mechanical properties of nanoscale building blocks to the macroscale bulk materials.’ But nature typically transfers stress from the macro to the molecular scale in a non-ideal way, and therefore it does not make perfect use of the strong mechanical properties of the nano elements. These do not fit or adhere well, causing natural materials to have limited performance in human technologies. With their insight into the behaviour of nano fibres in a water jet however, the researchers could assemble these into dense macro scale fibres; by strict control of the process variables they could solve the problems of transfer of nano properties to macro properties. If scaling up of these processes will succeed, many applications of this strongest biomaterial ever will become available.

And, for those who are more interested in the commercial prospects of nanocellulose materials: Biofuels Digest, the site that brings biobased news on a daily basis, published a Guide to Nanocellulose just last week.