Whereas the two companies discussed in this series so far use fermentation technology to imitate silk, the American company Kraig Biocraft Laboratories uses the old workhorse, the silkworm. They introduced spider genes into the silkworm in order to arrive at products much like spider silk, stronger than common silk. They claim their genetically engineered spider silk to have superior properties, for instance for bulletproof vests, and for the environment. They managed to secure a $ 1 million contract from the US Army that allows them to prove they’re right.

This is the third in a series on artificial silk. The articles were published on 16 December and 28 December 2017, and 4 January 2018. 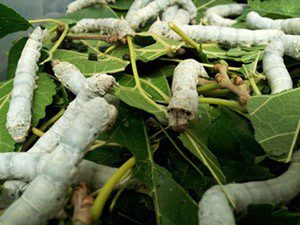 ‘When Kraig Labs first launched its research and development efforts to produce spider silk,’ the company writes on its website, ‘very few people believed that those efforts could be successful. Many even doubted that there would be a market for the product once it was developed.’ But here they are, and they do very well. They’re confident that their product is the most cost-effective one on the market, based on two factors. First, with their silkworms they can tap directly into an established industry. ‘Silkworms,’ so they write, ‘have a proven industrial scale production record, producing approximately $ 5 billion worth of normal raw silk per year. Our technology simply harnesses that production capacity by introducing a genetically engineered silkworm that produces a genetically engineered spider silk instead of common silk.’ The second factor is that their competitors, after a fermentation processes on the basis of modified yeasts or bacteria, still have to purify the fibroin. And after purification, this has to be ‘wet-spun’ to produce usable fibres. Wet-spinning, says Kraig Labs, is a process that often requires the use of chemicals like dimethyl sulfoxide, or DMSO, which has to be handled with great care. In nature, the silkworm itself takes care of these processes.

So Kraig Labs says: ‘We let nature do the work for us. Our genetically engineered silkworms are raised using the tried and true methods used by silk farmers for millennia. Our production process is as simple as growing and feeding white mulberry leaves to our proprietary silkworms and harvesting recombinant spider silk directly from the cocoons.’ They claim that on this basis, they can produce their genetically engineered spider silk for less than $ 300 per kilogram. Moreover, this process lends environmental advantages to them as well. The ultimate resource of the company’s silk are the mulberry trees on which the silkworms feed; they require little maintenance and help in reducing soil erosion. 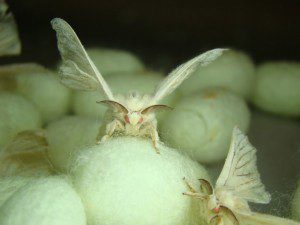 Spider silk is much stronger than common silk. Kraig Labs develop and produce, as they say, ‘new fibres that have never been seen before with extraordinary properties of strength and flexibility…. Because of its strength, resilience and flexibility, spider silk holds great promise for commercial and consumer applications. While the superior properties of spider silks are well known, there was no known way to produce spider silk in commercial quantities. Since spiders are cannibalistic, they cannot be raised in concentrated colonies to produce silk. The production of spider silk in commercial quantities holds the potential of a life-saving ballistic resistant material, which is lighter, thinner, more flexible, and tougher than steel. Other applications of spider silk include use as structural material and for any application in which light weight and high strength are required.’

Kraig Labs commercialized the knowledge on genetically engineered silkworms, developed at the University of Wyoming, in research to which also University of Notre Dame in Indiana and Zhejiang University in China contributed. ‘Silk fibre holds great potential as biomaterials for wound dressings, artificial ligaments, tendons, tissue scaffolds, microcapsules and other applications, and this research takes us closer to reaching that potential,’ said professor Don Jarvis, molecular biology professor at UW in 2012. ‘It’s clear that the silkworm is a uniquely qualified platform for this particular biotechnological application.’

Kraig envisions genetically engineered spider silk, with its superior mechanical characteristics, to surpass the current generation of high-performance fibre. They believe that spider silk is in some ways so superior to the materials currently available in the marketplace, that an expansion of demand and market opportunities will follow spider silk’s commercial introduction. According to them, genetically engineered spider silk is far superior to steel for bullet proof vests in material toughness, tensile strength and weight, and even much better than Kevlar® in toughness.

The company now produces many kinds of genetically engineered spider silk. These will enter into many markets, like medical textiles, safe and protective clothing, composites with textile structures, sportswear and apparel. Some of their varieties will be able to compete on the traditional silk market. The company’s next-generation product will be an essentially pure spider silk. This material holds the potential to make significant inroads into the technical textiles market, they say. And then, their ‘Gen 3 technical and medical fibre’, is designed to move beyond the physical, mechanical and chemical properties of natural spider silk. Gen 3 fibres are in a relatively early stage of development and will incorporate such elements as antibacterial agents for medical use, and metallic ions for use in industrial processes.

Kraig Biocraft Laboratories, Inc., as they say, is a fully reporting biotechnology company, the leading developer of genetically engineered spider silk based fibre technologies. The company has achieved a series of scientific breakthroughs in the area of spider silk technology with implications for the global textile industry. We will continue to hear from them.