In the future, wood fibres can be processed to be as strong as steel, or as soft as cotton. These wood fibres are biodegradable, but stronger than steel or aluminium per kilogram. KTH Royal Institute of Technology in Stockholm developed the technology, in cooperation with Deutsches Elektronen-Synchrotron (DESY) in Hamburg. 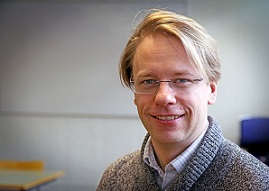 Separation and recombination of wood fibres

The technique draws on the cellulose fibres that make up a tree. Each single fibre is composed of as many as 40 million smaller fibres, or ‘fibrils’. Whereas these fibrils have been separated from each other before, the researchers now have succeeded in binding these fibrils together into filaments as strong as the original wood fibres. The filaments offer a wide range of uses, from manufacturing to clothing.

‘We have taken out fibrils from natural wood fibres,’ says Fredrik Lundell, researcher in fluid mechanics at KTH. ‘Then we have assembled fibrils again into very strong filament. It is about 10 to 20 microns thick, much like a strand of hair.’ The research offers potential for creating natural clothing textiles based on wood instead of cotton, or even replacing fiberglass in cars, trucks and boats. Lundell says that that unlike existing processes for making strands of cellulose, such as rayon, their production process is environmentally friendly and sustainable. The only other ingredient in the process is sodium chloride – commonly known as table salt – for binding the fibrils together.

‘We can control how the fibrils are arranged in the thread,’ Lundell says. ‘If they are aligned with the grain line, the material is stiff and strong. If they are more randomly aligned, the material is more elastic.’ Lundell says these variations mimic those that occur in nature. A tree is alternately rigid and flexible, in order to withstand the force of wind and its own weight. As trees grow, the fibril angles change in different parts of the trunk so the tree can handle any stress. 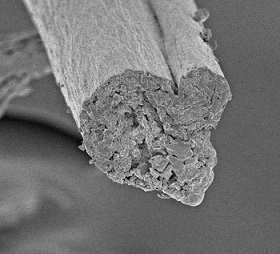 The new technology promises not only biodegradable structural materials from wood fibres, but also soft natural textiles that could be substituted for cotton; this is widely believed to be close to reaching peak cultivation. ‘Cotton cultivation requires large amounts of water,’ Lundell says. ‘Take for example the Aral Sea, which more or less disappeared as a result of the cultivation of cotton in Asia. If we are to have a 100 percent sustainable society then we need more materials that have a natural place in the natural cycle.’ Lundell adds that the work on wood fibres continues, with the aim of lining up fibrils so that alternatives to fiberglass can be produced.

‘The challenge we face now is to scale up the production process,’ he says. ‘We must be able to make long strands, many threads in parallel – and all this much faster than today. Nevertheless, we have demonstrated that we know how this should be done, so we’ve come a long way.’ He says that by manipulating the nanostructure and adding other components such as carbon nanotubes in the thread, other applications become possible, such as clothing with embedded electronics.

By working with fibrils as the basic component, the technology retains the natural structure of cellulose. That means that the material is 100 percent compatible with nature. Cows eat cellulose. Likewise, dead trees and plants are broken down by natural processes.

The work was mainly carried out at the Wallenberg Wood Science Centre at KTH, in cooperation with Deutsches Elektronen-Synchrotron (DESY) in Hamburg, Germany. Much of the current progress in wood fibres research is the result of interdisciplinary collaboration. In this case, the team within the Wallenberg Wood Science Centre consisted of researchers in fluid physics and researchers in fibre and polymer technology, with Professor Lars Wågberg as the point person. Also involved is Stephan Roth at DESY in Hamburg. The availability of advanced measurement techniques in DESY’s synchrotron light facility, and the Hamburg scientists’ expertise has been crucial.