Many universities and innovative companies are looking for new ways to close the future protein gap for food and feed, and cover future protein demand on a sustainable basis. German nova-Institute compiled an overview of the latest developments.

Nova-Institute organizes a conference ‘Revolution in Food and Biomass Production (REFAB)’ October 1 and 2, 2018 in Cologne. At the conference, the ‘Future Protein Award’ will be awarded. 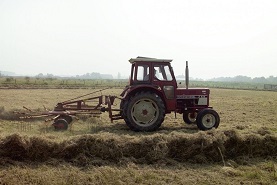 Will agriculture be able to feed 10 billion people in a sustainable way? Photo: Wikimedia Commons.

Matt Ball, senior media relations specialist of California-based The Good Food Institute, says: ‘The two most pressing issues facing the food industry today are: how will we feed almost 10 billion people by 2050, and what do we do about food production’s significant contribution to climate change? Agriculture causes more global warming than the entire transportation sector.’ He sees the answers in a multitude of different technologies: ‘Plant-based and clean meat will be key to solving both these issues, as these approaches are much more efficient and sustainable than our current manner of producing meat.’ Clean meat in his terminology is the production of meat based on cell cultures; artificial meat that tastes and looks just like real meat but is produced in the lab without the need to rely on live animals. Two further options for covering future protein demand are in the pipeline: insects, and so-called single cell proteins, produced by sunlight and carbon dioxide only.

A revolution of the old-known: covering protein demand from insects

In recent years, insects attracted attention as an alternative food and protein source. Insects were used as human food in many cultures from the dawn of mankind, and they are part of traditional food in several regions of Asia, Africa, Australia and South America. However, especially in western culture, insects have to overcome several hurdles if they are to become part of the accepted food supply. Europeans usually see insects as pests, react with disgust and find it difficult to see them as a valuable part of a meal. In order to introduce them as nutrition, we need to find creative solutions and specific fields of application. Since the beginning of 2018, the new EU food directive offers some options for the introduction of insect products into the supermarkets, an opportunity for start-ups to gain visibility. In Germany there is insect-based protein snacks as sports food from companies like SWARM Protein in Cologne, pasta with mealworm flour from Plumentofoods in Pforzheim, available for customers at Metro markets, and burgers partly made of insects from the Bug Foundation from Osnabrück at REWE. These products were introduced in the last months and have started to cover protein demand as new and exotic products in the food market.

Protein-rich food from insects for aquaculture, as an alternative to soy-based products, could open up a very promising market. Companies like Ynsect in France, Hermetia in Brandenburg and AgriProtein in South Africa are working on growing insects (mealworms, buffalo worms, black soldier flies and even termites) for the production of protein-rich feed for pigs, cattle, fish and pets. And they aim to provide proteins and by-products like chitin to the industry for the production of chemistry and biopolymers.

Covering protein demand from the sun and CO2: solar food

An even more advanced step is the production of so-called single cell proteins for food and feed. These are cells of cyanobacteria and other microorganisms produced by carbon dioxide (CO2) in special breeding systems using modern biotechnology. The cells are cultivated in different ways and can be fed from sunlight to use photosynthesis or be sugar-based via fermentation processes. The final product consists of single cell proteins with a high protein content and tailor-made other ingredients like Omega 3 fatty acids and vitamins, that are essential for the requirements in various applications.

A system for the production of single cell proteins was developed by Dr. Juha-Pekka Pitkänen at the Finnish research centre VTT, who started an SME company this year with the perfect name for his products: Solarprotein. They will produce and market single cell proteins for food and feed applications in Helsinki. Asked about the taste of Solarprotein, Dr. Pitkänen answered: ‘You can eat it – but it does not have a taste by itself’; this makes it a perfect product for food since the taste can be adapted to the wishes of the customers. In case of Veramaris, a joint venture company of Evonik and DSM, the customers will be fish farmers – they concentrate on single cells with high concentrations of essential Omega 3 EPA & DHA fatty acids from natural marine algae to substitute fishmeal from marine fish.

An option that might become crucial in the future is meat itself, produced in a clean way by cell cultures. It will take several years to produce clean meat at commercial scales, but several companies are already working on this innovation. The high-tech start-up company Memphis Meats in California was backed by the Gates Foundation and Richard Branson to produce the first artificial hamburgers and meatballs. In the Netherlands, the company Mosa Meat is also working on this topic and has presented their first meatballs. The Israeli company Supermeat works together with the German Wiesenhof Group for the development of artificial chicken meat. And covering protein demand from fish is also in focus, for example Finless Foods in California aims at producing artificial tuna fish fillet without the need of fishing.

Interesting? Then also read:
New protein sources will fill the gap
Insect biorefinery: it exists, it works
Waste is the most important biobased resource; but legal barriers abound