One of the main concerns about world food supply is the production of proteins. Lux Research, in a new study, suggests that ‘the current dominance of meat and seafood will wane in the coming decades,’ and that ‘several alternative protein sources will fill the gap.’ Whereas global protein consumption would double in 40 years’ time from 473 Mt to 944 Mt in 2054, ‘alternative protein sources’ would grow much faster, at 9% annually, causing these proteins to dominate the human diet by mid-century. 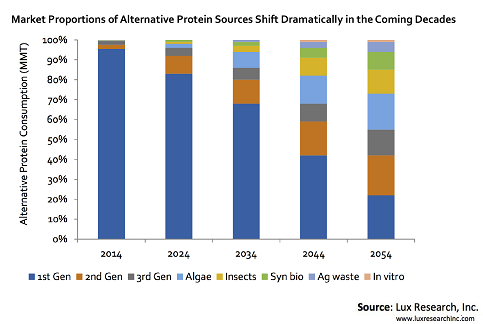 Envisaged breakdown of existing and new protein sources in a growing market  the decades to come.

‘As demand for protein grows more rapidly than conventional meat sources can supply,’ Lux writes, ‘the food industry will respond by supplying non-meat-based proteins.’ The study concentrates on ‘alternative proteins’ and does not include human protein consumption from maize and wheat. It distinguishes several generations of protein sources. The ‘first generation’ plant proteins (from soy) will continue to dominate in the next 10 years. But the ‘second generation’ from sources such as pea, rice, flax, canola, and lupin will grow fast and have 9% of this market by 2024. And its share will continue to increase. By mid-century, Lux expects protein sources other than soy to cover three-quarters of the market. ‘Third-generation’ plant proteins – the likes of moringa, quinoa and chia – will already claim 4% of the alternative proteins market by 2024, says Lux, while ‘sales of insects and algae as protein sources will also increase and each claim up to 2% of the alternative protein market share.’ And these will continue to grow as well. Even in vitro meat will be going to contribute to human protein intake. So by mid-century, the global protein market will look entirely different from now. 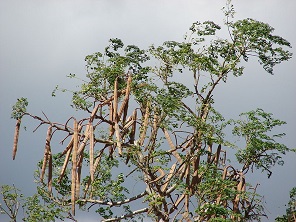 Moringa, a tropical tree, could be a new protein source. Photo: Forest and Kim Starr.

Growth in population and wealth

We asked Camilla Stice, the lead author of the study, if the amounts of proteins foreseen would be sufficient for feeding the world while assuming wealth to increase. And if so, whether this would imply substitution of meat by vegetable proteins. Yes, she mailed us, in their model of global protein demand they included factors like ‘consumer preference, increased affluence, concerns over the planet’s ability to produce sufficient meat, the impact of livestock agriculture on the environment, and mounting scientific advances that are driving changing protein demand. As total protein consumption increases, we predict the current dominance of meat and seafood will wane in the coming decades, and several alternative protein sources will fill the gap.’

And did Lux calculate the amount of land required for the production mentioned? How did that compare with present land use? Any issue of LUC or ILUC arising? ‘We have calculated the land that will be required to meet our forecasted alternative protein demand,’ Camilla mailed us. ‘Approximately 100 million additional hectares of land will be needed to grow crops for alternative proteins. However, it is important to note that this will come from a combination of shifting animal and human food streams, changing some land from one crop to another, and a limited addition of new cropland. Net land use change will likely be minimal from the perspective of the broader global agricultural industry.’

Lux continues to ask what market participants should do in order to make use of the opportunities arising from these changes. Food companies could initiate the development of novel formulations that incorporate alternative proteins into existing products. Seed companies could work on breeding programs for these crops. Ingredient producers could focus on new extraction technologies for these alternative sources. And Ag tech developers could anticipate changing grower needs and respond with relevant developments. As Lux puts it: ‘With reliable demand and stable, increasing prices, farmers growing chia or quinoa will be more likely to adopt novel technologies than before. Especially for labour-intensive crops like quinoa, winning technology developers will focus on technology advancements in terms of agricultural machinery, precision agriculture prescriptions, and other labour-saving developments.’

So even with a growing and more affluent world population, we can envisage a future with enough protein sources to feed the world. A world in which a changing diet is driven by increased affluence, consumer preference, and concerns over the planet’s ability to produce sufficient meat.