You are here: Home / 2016 / May / Waste is the most important biobased resource; but legal barriers abound

We are underutilising waste, says Eva Gladek, CEO of Metabolic in Amsterdam. It is a very important source for a circular economy. The most important challenge is not technical but legal, although large companies like DSM need a more homogeneous feedstock than waste can generally offer. This challenge can be surmounted if we use biological rather than chemical processes.

This is the second article in a series of two on Metabolic. The articles appeared on 4 May and 8 May. 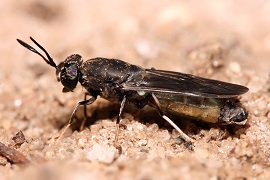 ‘I think that (organic) waste is a huge untapped resource and that’s what has to get better,’ says Eva. ‘One of my favourite companies in the Netherlands is a company called Protix Biosystems. They actually use low-quality organic materials to grow insects by growing black soldier fly larvae (hermetia illucens) from waste. We did a lot of experiments with these larvae (link to video). They have a very high concentration of nutrients, of proteins and lipids, and they can be turned into animal feed but also turned into chemical feedstock, for example as the basis for biobased paint. This is the kind of cycling we need to get, where we’re really upgrading low-quality biobased materials into high-quality functions and where we’re matching the uses of material in the right way, i.e. creating the smartest possible cascades.’

‘Protix Biosystems is a good example of promising developments in the biobased economy. They are using black soldier flies to convert low-quality biobased material into high quality products. One of the big challenges they are facing though is that they’re not legally allowed to use waste. This is because the insects are actually considered micro-livestock and you’re not allowed to feed what’s classified as waste to livestock. They are not allowed to use the lowest possible quality organic waste material and upgrade it, to homogenise it and convert it into a higher quality. This is the top legal barrier to the biobased economy, i.e. how to safely, legally use waste to cascade materials and actually upgrade them to higher uses.’

‘The regulations surrounding waste are outdated, both for a circular economy in general and for a biobased economy specifically. Legal issues were a challenge for us too. It was one of the major lessons from building this site, De Ceuvel, that you’re not even allowed to pick up waste from the street and use it for building. It was astoundingly challenging to deal with found materials in terms of the need for permits. It cost a lot of money, and there were materials we couldn’t use and had to pay to get rid of. And this is not only a Dutch problem: some of the bigger stumbling blocks are actually European. There are people researching this, but not sufficiently. And I think some people are lobbying for this, but certainly not enough: because the companies that are involved in these directions are small and they don’t have enough capacity to organise such a lobby. They’re growing, but they need to band together.”

Organisms are our friends and tools

There are definitely larger companies involved in biobased, companies like Interface (the carpet tile manufacturer), but those are facing different challenges. Interface and a lot of these companies have been working to achieve a closed cycle economy for a long time but they also face a lot of challenges with collection of materials and processing them. And DSM, which is doing a lot of innovation with biobased feedstocks for their chemicals, are not looking at waste as feedstock because it’s so un-uniform; and then it’s very difficult to actually have a consistent quality of output. That’s true if you’re dealing with organic waste and converting it in a chemical process, but if you’re dealing with organic waste and putting it into a biological process then you’re much better able to flatten out that quality, like with the black soldier flies. The nutrient content per insect may vary, but you will get a much more uniform output with these larvae.’

‘One of the key things is that in a biobased economy, working with biobased materials, biological systems and biological organisms are our friends and our tools. We should be using them in ways that allow us to work with nature and not against it, to actually have them replace our factories or the complicated systems we are currently using.’