You are here: Home / 2016 / May / Eva Gladek: Metabolic puts innovation in biobased and sustainability to practice

Metabolic has quickly ascended to leadership in the field of circular economy consultancy in the Netherlands since its establishment in 2012. Recent projects include the bioremediation of a waterfront industrial area and a study of the world food system and its impacts for WWF. We interviewed its founder Eva Gladek. What does she consider major developments, and what are the obstacles she sees for biobased.

This is the first article in a series of two on Metabolic. The articles appeared on 4 May and 8 May. 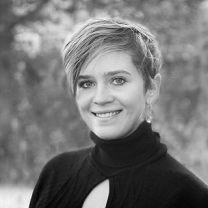 Arriving at Metabolic’s premises in Amsterdam you’d hardly imagine yourself at one the leading circular economy consultancies of the Netherlands. The waterfront area is strewn with pieces of scrap wood, abandoned boats and assorted rusty equipment. Slowly the realisation dawns that this is an organisation that practices what it preaches. We meet in one of several former houseboats, deposited on the shore as part of a project to redevelop this polluted industrial site along the waterfront, and during the interview Eva Gladek informs me that even the table we are sitting at is made from trees that were cut down in the city and were going to be burnt for energy.

Trained as an industrial ecologist, Eva Gladek was a sustainability consultant before she founded Metabolic in 2012. ‘I was very frustrated with the world of sustainability consulting, which was just providing advice and creating designs that would lie on a shelf, collecting dust for eternity. And so the idea of Metabolic was to create more of an implementation agency, a kind of action-oriented company.’ This translated into a company with a rather unique company structure. It has three divisions.

The first, Metabolic Consulting, is the ‘brain of the company where we understand problems and analyse the system’. It performs systems analysis for cities and projects on the built environment, but also for sectors, companies and specific products, based on techniques of industrial ecology such as life-cycle assessment (LCA) and material flow analysis (MFA). For example, Metabolic recently finished a study for WWF on the impacts of the world food system. 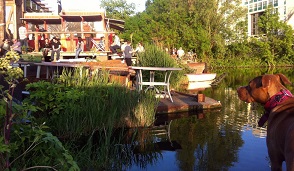 Consultancy in the circular economy is not what makes Metabolic unique. ‘Sometimes we identify leverage points where you can make a change to have a positive effect on the system as a whole, and that’s when we do applied work.’ This is the second division, Metabolic Technology, which does experimentation and product development and implements the ideas developed on the consulting side. ‘This site, De Ceuvel, is an example of that, we started here as a consultancy partner with the objective of close all material flows. And we are experimenting with other technologies, like a struvite reactor which can take urine and extract fertiliser.’
The third division, Metabolic Ventures, is where specific ideas are scaled up into larger companies, such as the recently founded Spectral Utilities which focuses on basic resource provision.

‘We at Metabolic did an analysis of the global economy throughput,’ says Eva, ‘and found that approximately 22% of all materials extracted are from biobased origin, mostly wood, food, fibres etc. However, a large part of the impact of our economy (more than 50-80%, depending on the impact category) is caused by the extraction of these materials. Most of these impacts are associated with the use of large amounts of land, water, displacement of habitats. So although biobased is central to any economy, it is not necessarily the case that any biobased material is better than any non-biobased alternative. Context is extremely important. For example, in a life-cycle assessment of building materials wool is an option for isolation materials, and it’s always given a very poor ranking. That’s because if you are using sheep just for wool, the wool gets allocated all of the impact from e.g. land use, compaction of soil, methane production. But if you are using the sheep for other functions the impact completely flips. Organisations like the municipality of Rotterdam and Barendrecht have used sheep to mow the verge of the road, in collaboration with shepherds. Then the wool is a side-product of other functions and they’re also happening to save on fuel that would otherwise be used for machines. So the context is critical, and that’s the case for most biobased products.’

Material should be matched to function

Eva Gladek suggests that we should first get the philosophy straight, based on indicators such as circularity factors; matching material to function; and making much more use of waste. ‘We certainly need to move to more biobased materials, we need to move to an economy that is more fundamentally concerned with transforming biological flows from the beginning to the end. But we should do it in a way that considers what the highest value use is of a specific material. That is, we should always try to preserve the highest amount of complexity rather than degrading it to its lowest form.’

‘What’s more, all materials can and should play an important role in a sustainable economy. What’s important is the way in which materials are matched to the functions they are used in. One of the things that we at Metabolic developed was a set of circularity factors. These are a number of criteria that define what kind of function a material should be used on. This for example includes renewability, but also degradability, scarcity, toxicity, and recyclability. There are some functions for which biobased materials or renewable materials are best suited, there are some functions for which durable and long-lasting materials are best suited, and there’s a lot of grey space in between. For example, biobased materials are better if you’re going to disperse something into the environment, so they can actually get there the way they’re supposed to. This pertains to things like paint and coatings and cleaning supplies, these are going to be dispersed into the environment and never retrieved. Materials for these functions should not be non-renewable or scarce, they should be biobased,’ says Eva Gladek of Metabolic.