Cement production by itself is responsible for a stunning 5% of total global CO2 emissions. As global construction activities still gear up, we urgently need more sustainable concrete, no longer based on Portland cement, the basis of the construction industry for the past 200 years. And here’s the message: mankind has developed such innovative concrete. But will the conservative construction sector apply it? ‘The world talks a good talk about sustainability but when it comes to funding such work, it is nowhere.’ 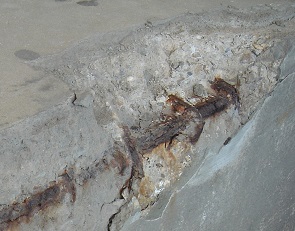 Concrete degadation in the Hippodrome in Oostende. Photo: MADe.

Apart from sustainability issues, another reason why mankind should urgently find alternatives to concrete in its present form is concrete degradation. This is one of the most pernicious and at the same time one of the least discussed problems in present day society. Innovative concrete may have much less degradation problems. Important sources of inspiration for new concrete materials are ancient buildings and structures that still stand firm like the Egyptian pyramids and the Roman Pantheon. Ironically, on the one hand these structures have withstood thousands of years, whereas most modern concrete buildings and infrastructural objects are designed for a lifetime of one hundred years; but on the other hand, the innovative concrete based on the old arts may have difficulty in passing present-day tests. Fortunately, World Economic Forum and Ellen MacArthur Foundation addressed the issue. New materials are underway that also emit much less CO2 in their production (93% emission reduction has been reported, for the cement by itself even 97%). But how willing is the construction industry to use this innovative concrete?

The vast CO2 emissions of Portland cement production are due partly to the decomposition of limestone (calcium carbonate) into calcium oxide and CO2 as the cornerstone of the production process; partly they are attributable to the very high temperatures (typically 1450 oC) required to process calcium oxide to clinker, by mixing it with additives like clay as a source of aluminium and silicon. In principle, concrete based on Portland cement is a high-quality and versatile material that carries many benefits to the construction industry. Its main disadvantage (its low tensile strength) can be overcome by adding steel reinforcements. But many concrete structures will be damaged during their lifetime, often because the steel reinforcements are not perfectly shielded from contact with air and water, and start to corrode; they then expand and cause fissures in the surrounding concrete, which causes more corrosion. Concrete may also corrode through freezing of trapped water, fire, chemical damage e.g. by sea water and bacteria. Concrete degradation is so widespread that the UK spends £ 40 billion per year on the repair and maintenance of its ageing infrastructure, while the US is reported to need about $ 3 trillion over a five year period to raise the overall quality of its infrastructure from poor to acceptable. 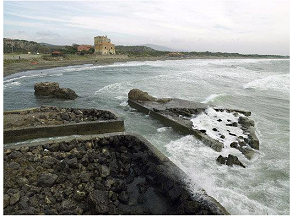 The search for innovative concrete was triggered among others by marvel at the durability and resilience of Roman concrete. Piers built 2,000 years ago endure to this day, whereas many modern harbour structures are already crumbling away. A team of scientists headed by Marie T. Jackson of the University of Utah believes that it may have unlocked the secret to the extraordinarily long life of Roman concrete. They studied concrete cores from the ancient Roman pier, Portus Cosanus in the Orbetello region of Italy. They discovered that Roman engineers used a mix of volcanic ash, seawater and lime, which set off a chemical reaction that increased cohesion with exposure to seawater, even after the concrete had technically set. This ‘pozzolanic reaction’ triggered a formation of crystals in the gaps of the concrete. It also helped to prevent cracks from growing within the structure, providing internal reinforcement over time.

Innovative concrete inspired by the pyramids

Engineers of Drexel University, Philadelphia, developed a cement based on findings in Egyptian pyramids. Their research started when professor Michel Barsoum heard a rumour in 2002 that the Egyptian pyramids were cast in cement on their outer layer. In samples taken from the pyramids he discovered, together with Aron Sakulich, that a small percentage of the blocks from which the pyramids consist were cast by cement, especially by the top. There appeared to be only four ingredients to the Egyptian cement: limestone powder, water, lime and diatomaceous earth, a naturally occurring sedimentary rock. If then the ancient Egyptians could make a cement that survived thousands of years out of nothing and very little equipment, couldn’t this inspire the development of a modern innovative concrete? 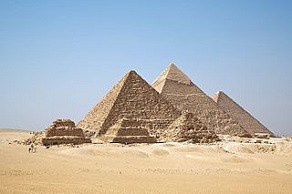 The ‘green’ concrete developed by the Drexel engineers, among which also Alex Moseson, based on the old Egyptian technology, is a form of alkali-activated cement that utilizes slag, an industrial byproduct, and limestone, and does not require heating to produce. This lessens the cost of materials by about 40% versus concrete from Portland cement and reduces carbon dioxide production by an almost unbelievable 93%. The Drexel cement does not contain clinker, which makes a lot of difference to its environmental effect. But then, the new material will have to go through the tedious procedure of testing. In 2012, Barsoum said: ‘Our results and the literature confirm that it performs as well or better than Portland cement. We are very close to having the cement pass an important commercialization milestone, ASTM C1157, a standard that judges cement-like products on performance, such as strength and setting-time, regardless of composition.’ But the latest testing document found dates from 2010.

In 2008, the group of Drexel engineers founded a company to commercialize their innovative concrete, called Greenstone Technologies. ‘Even passing those tests, it’s an uphill battle. It’s a political battle more than anything,’ Barsoum said in 2012. ‘If we can get it in some niche application, I’ll be happy.’ But here, the story ends. Early 2018, Barsoum emailed us: ‘The world talks a good talk about sustainability but when it comes to funding such work, it is nowhere. And the Portland cement industry says that you can substitute for Portland with anything you want as long as it behaves exactly like Portland cement!’ Really, wouldn’t the world be interested in an innovative concrete that produces 93% less CO2, and that might even survive for 2000 years?