This is the third in a series of four articles based on an interview with Daan Bruggink on sustainable building. The articles appeared on 19 and 25 September and 10 and 16 October 2016.

Until quite recently, not even progressive political parties knew what sustainable construction entailed; now even conservatives know what it’s about simply because there’s money in it. Sustainable offices are simply worth more than not-sustainable offices. But this does depend on certification and the score for this certificate. Project developers want the kind of sustainability they can show through higher BREEAM scores, that lend higher value to their real estate. That is also what investors want. For example, ‘The Edge’ is a building in Amsterdam with a BREEAM score of 98,4%. Every project developer knows it.

But a tour through ‘The Edge’ doesn’t entice enthusiasm about the materials used. And I don’t have feel ‘hey, what a pleasant working environment.’ I don’t see natural principles used, and that’s because this is not part of the BREEAM’s labelling system. Last year the advisory group for the BREEAM asked me to become their president: I wholeheartedly accepted, because it means I can promote attention for materials, health and circularity. As for ‘The Edge’: the same building constructed in ten years’ time wouldn’t score 98,4% but, say, 75%. The inclusion of sustainable materials would return the score to almost 100% again. Clients for that sort of building, looking for a good sustainability score will, based on a better grading system, end up with the developer that uses most biobased materials – at the lowest price, of course. With such a grading system in place things will evolve automatically towards biobased, because the developer will of his own accord call the maize bioplastics guy to say, ‘What is your product, I want it, how much does it cost, how well does it perform, here’s the money and go develop it!’ And there you go. Then you don’t need to get on your soap box, then it will come of its own accord. 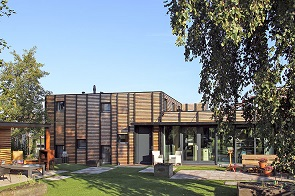 The push and pull of sustainable materials

Government always tries to achieve things by pushing. That is also what developers of the materials do, they make bioplastics and shout how good it is and that everyone should use it. I know that it’s good stuff, and so do they, but the contractor thinks it might but doesn’t know it and considers it too much hassle. That’s what happens when you try to push. I don’t think that’s the best approach, you should try to ‘pull’. That’s hard to do of course as a supplier of biobased materials. Biofoam for example: I wanted the stuff, but when I called the people who produce it, it turned out they only run their production in April and October. That’s useless for me, because I cannot tell my client to sit and wait until April.

And that’s the thing, demand is not high enough. This product, Biofoam, is made by ISObouw and developed by Synbra. ISObouw develops it and stimulates production and wins prizes. This shows their commitment to this product. And it will take some time before Biofoam takes over the market. But when the oil prices become too expensive or when the market changes, they have it ready and waiting. They have the knowledge, and demand will grow.

Biobased producers are too kind

The biggest challenges for sustainable construction are not the materials. They are the conviction of other parties in the sector. There are enough small contractors in biobased, but the larger players are simply not that interested. We’re too small. If the OVG, the company that developed The Edge, says: we are going to build the entire foundation for one of our projects out of Biofoam, then the producers will make sure they can deliver. For such a large project they will! But if I arrive and ask for a project of five buildings, they will ask me ‘do we really have to start our entire production line for that?’ It’s coming, but we are still at the beginning.

Biobased materials, as you will have seen, are produced and supplied by small players. Idealistic people, who have been working for ten or even twenty years on their product. And in general, they are also very friendly people. One of my first clients once told me, ‘people in ecological construction, they are all friendly people!’ And I hadn’t thought of it like that yet, but it’s true. It’s not a very tough world. And that’s a problem, because when you grow larger then at some point you have to grow tougher. Biobased people are too kind!

All these suppliers of sustainable materials, you should get them in one room. Because I think the heart of the matter is that the concrete lobby is all concrete, the steel lobby is all steel, but the biobased lobby involves all these different materials. And that makes it difficult to unite people. While this is definitely possible, and politically viable. To give an example: one cubic metre of wood stores 0.6 tonnes of CO2. Aluminium, a frequently used material in construction, involves CO2 emission when it is produced. All these natural materials store CO2. Politically that is very interesting, and it brings good lobbying options. But as of yet there are not enough commercial people in biobased with an attitude of “let’s fix this, we’re going to make money and we’re going to make lots of it!” And that is an attitude you’ll find plenty of in the concrete and steel lobbies.