You are here: Home / 2016 / September / Sustainable construction is organising horizontally

This is the second in a series of four articles based on an interview with Daan Bruggink on sustainable building. The articles appeared on 19 and 25 September and 10 and 16 October 2016.on. 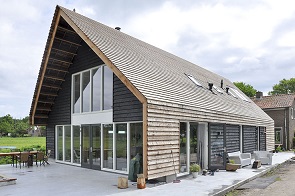 I completed my studies in architecture ten years ago, when there wasn’t that much interest in sustainability yet, says Daan Bruggink. I think I didn’t finish my first complete building independently with ORGA until 2008. This was also the time when Al Gore started going the rounds with his story ‘An Inconvenient Truth’, and that’s when the gears started to shift into motion. But because things were still quite new I had to invent the wheel myself; partially also because I’d never worked at large architecture firms. I hadn’t because I didn’t want to, because that also drags you along in the way of thinking particular to that respective firm.

I may also be of my own mind, which means you consider very normal and current things as rather strange. Like the execution [of construction work]: the client wants to build ecologically, we want to, there’s a permit, a plan and even a budget. And then there’s the conversation with the contractor to actually execute the plan. “Well, I don’t know, sigh, we’re not familiar with the material, we can’t give any guarantees…” That’s very tiresome, and sometimes even insurmountable. The contractor is in many cases too powerful, and removes all sorts of things from the design – only has eyes for making things as cheap as possible. So you need to have the power to keep these things in the design, otherwise there’s no point to designing sustainably. 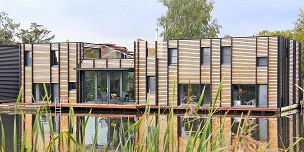 In sustainable construction, the designer would like the contractor to be familiar with sustainable materials. Of course I understand that I can prescribe eggplant tiles for the façade but am not the one who has to give a warranty for ten years. If these tiles fall off after ten years it’s the contractor who has a problem. So I understand that this makes contractors conservative. But too often this covering of risks means that everything that is uncommon is avoided by contractors.

This means that you want to involve as many relevant people as possible in the process. That is why we started ORGA construction, our own construction branch. I started looking for a contractor – because I am not a contractor and don’t want to be one – and I said, “let’s do this together, and let’s agree that you will build based on ecological principles. I involve you early in the process, and if I prescribe an eggplant tile, you can research it and don’t need to worry about rising costs that make you say ‘no’ beforehand.” That is how you make space for innovation: by organising horizontally.

The world of construction is traditionally entirely different, with purely vertical organisation, says Bruggink. There are four or five hundred branch organisations in construction, and they all build vertically. You’d rather take a more horizontal approach, in the sense of “Let us build hospitals together”, or whatever other kind of building. That is much more horizontal and means that everyone in the branch has the same goals.

This is not self-evident yet and comes with some struggle, but we have to move to that point or end up getting nowhere. It’s also more bottom-up than top-down, so it means developers that build for the market (supply-based) won’t know how to do this; it also means that the market will enforce more (specific) demand. When the market demands as such, a developer, contractor or architect has less leeway. The client often has already researched the possibilities. Bottom-up construction makes the client more important, and the recession has only strengthened that position. And that is also what we need to make serious steps in sustainability.