Biobased really is a sub-branch of circular, says Daan Bruggink of ORGA architects. The circular economy knows two cycles, technical and biological. The biological cycle of course contains the ‘real’ natural materials: wood, reed, fibre, flax, and so on. Technical materials such as foam are often fossil-based. We should reuse or recycle 100% of these materials, but that doesn’t always happen. The interesting thing about biobased materials is that they are biodegradable, and we should always aspire to use such biorenewable materials.

This is the fourth in a series of four articles based on an interview with Daan Bruggink on sustainable building. The articles appeared on 19 and 25 September and 10 and 16 October 2016. 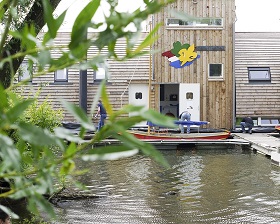 ‘We shouldn’t make foam out of fossil oil but out of plant-based oil, that is to say short-cyclic. That is the great solution to our resource problem. Fossil is long-cyclic: it takes a million years before the materials are renewed. That is what you cannot say that you are working in a cycle – that’s nonsense. You have to think short-cyclically; to make the same material out of plant-based oil, which is also biodegradable, in a cycle with a turnover of maximum 100 years, often shorter. Then you shift from technical materials to biobased. Of course that can also be done in bulk: that is, as far as I’m concerned, the grand solution offered by biobased materials.’

‘What is circularity, really? Consider a large oak tree. You could chop it up and throw it in your fire place. It would be stupid to do that – there are so many better options – but it would still be cyclical. In our part of the cycle we should make our steps as large as possible: take as much time as possible to return our biobased material to nature; but if you keep those steps short there is not necessarily a problem. What I consider the principle of biobased is this: in the time in which you use something, it must grow back.’ 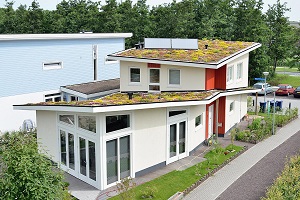 ‘The same goes for the biobased cycle in circular building: that the material grows back in the time in which it is used. That is what construction in the circular economy should look like. If you apply that in design, then you have to think from big to small. First there’s the building, one part of that is the composite façade, then the products, the materials, and the resources. If you were able to copy the whole building in one lifecycle, that would be the ultimate goal; but even in the commercial (non-biobased) world that has never been achieved. I have never seen a modular building being used for eternity. For one, in reality fashions and fads always play a role. Building something for eternity is just not realistic. Unless perhaps you save the design and wait for fifty years until it is a hype a gain. Perhaps.’

‘So then you take a step back. The composite façade, could we reuse parts of it in full? I doubt that too. But materials, that is certainly possible! Preferably part-wise, e.g. per component such as isolation blocks. But if that isn’t possible we should be able to recapture the resources, either through the technical cycle (recycling) or through the biological cycle (degradability). If you can do that you achieve circularity. There are people working on this right now, for example through a resource passport in the work of Thomas Rau. I don’t know if that’s going to be the solution, but that doesn’t matter. If the materials aren’t hybrids you can always see what it’s made of, and you don’t need to keep a log.’

‘Finally there are the wreckers and garbage processors: developers should really talk with them. Wreckers also want to make money, and to put things in the oven is the last thing they want! To give an example of their circularity: the Amsterdam garbage processing unit, the large one in the Sloterdijk area, is the largest supplier of silver in all of the Netherlands. The only thing they put into the oven are things they can’t use otherwise. If they can reuse or recycle something, they will. But if the process of separation is too expensive because products have been designed as such, then of course they can’t recycle it.’ Says Daan Bruggink.