You are here: Home / 2019 / January / Circular agriculture, the model of the future

In September 2018, the Dutch minister for agriculture Carola Schouten announced that circular agriculture will become her main policy goal. Circular agriculture, also known as low external input farming, is the model of the future. The minister intends to remove obstacles to it, and to stimulate this model all across the country. 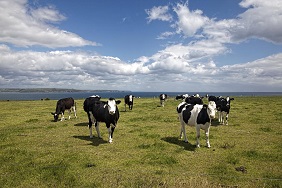 Cows should be fed with fodder rich in fibres and low in proteins. Photo: Christopher Michel, Wikimedia Commons.

An old principle in a modern dress

Circular agriculture amounts to a revival of old agricultural practices. The idea is to farm in such a way that losses in the production chain are reduced to a minimum. This of course also was the idea behind the mixed farming model, predominant until the agricultural revolution around 1900. In the mixed farming model, both agriculture and animal husbandry were practiced on the farm; the horse and the pig ate what could not be digested by humans, chickens pecked all leftovers, and all manure was returned to the land. This model ended when fertilizer came to the fore. This allowed the ascent of monocultures, and the optimization of parts of the old model all on their own. Circular agriculture amounts to a return to the idea of reuse of all components of the system, but then at a higher level, making use of modern technology.

The ground for this new approach was laid by Jaap van Bruchem. By the end of the nineties, this researcher from Wageningen UR discovered the importance of closing the cycle in dairy farming. The basic idea was that too much nitrogen is deposited on the land nowadays, through fertilizer and the import of feed concentrate. He started feeding the cows with feed rich in fibres and low in proteins. That improved nitrogen utilization, and cows started to produce better quality manure: low in ammonia. This manure then produces a more active soil: better microbiome, suppression of denitrifying bacteria, healthy plants. The manure does not have to be injected into the soil, it can even be improved with roadside green material to produce an odourless compost. Circular farms will reduce inputs as much possible, and will try to close cycles as much as possible, in particular those of nitrogen, phosphorus, carbon, energy and water. Of course, the best architecture of those cycles will depend on conditions: soil, crop, cost structure – which means that there will never be one single reference model for circular agriculture. Often, circular farmers may have a somewhat lower income in the short term. But always with a better view on a well-run farm in the long run. 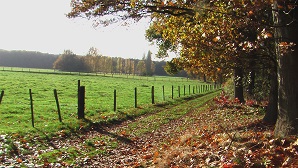 The Dutch region of the Achterhoek has been the object of calculations on circular agriculture. Photo: Frans Bosch, Wikimedia Commons.

The concept of circular agriculture may be particularly appealing to the Netherlands, as Dutch agriculture has developed a lot of open ends. The Netherlands has a very large livestock population, based on the geographic position as a transit and trading nation. After World War II a model has become successful based on the import of animal feed, growing pigs, cows and chickens on it, and exporting meat, milk and eggs. The Netherlands, population 18 million, houses 25 million pigs, 4 million cows and even 100 million chickens. Little wonder that for over fifty years already, the excess of manure poses major problems; whereas the Dutch model causes minerals depletion in the exporting countries.

Of course, in our times cycles do not have to be closed within a single farm. The cycle can also be drawn at the regional scale, like in the model that Johan Sanders et al. have developed for the Dutch region of the Achterhoek. For firstly, a lively trade has developed in agricultural side products, and such models can develop this further. Secondly, the new circular models can utilize modern technologies, like biotechnology and biorefinery. Sanders et al. make use of three modern principles: (1) they redistribute feed ingredients, in such a way that fodder for cows and pigs has exactly the correct composition, causing less manure production, (2) they improve digestion of feed fibres by pretreatment and (3) they lend an economic value to formerly useless side streams like roadside grass and parchment, through biorefinery. 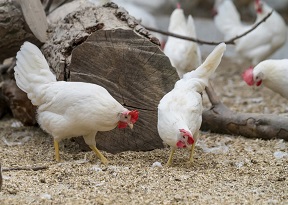 Many more useful side streams

In an excellent article in the December issue of Wageningen World, Albert Sikkema gives an impression of the future of circular agriculture. He starts with a description of Kipster, the ‘most animal-friendly and environmentally-friendly poultry farm in the world’, as they advertise themselves. Kipster makes use of modern views on animal behaviour, much like the related concept of the Roundel. In these stables, chickens find the suitable environment for each activity that their natural inclinations require, like foraging, resting and dust bathing. And Kipster feeds the chickens just with side products of the agricultural industry, like cookie chips. In other words, the chickens do not eat food that we could have consumed ourselves. This leaves much room for Kipster to develop even further. The European food and feed industry now produces some 115 million tons of side streams, whereas just 4 to 5 million tons of that amount is now used to produce fodder. And Kipster is an economically promising model: the eggs are as cheap as those from animal-unfriendly barns.

Minister Carola Schouten envisages that circular agriculture will extend into each corner of the sector. She writes: ‘in a system of circular agriculture, arable farming, livestock farming and horticulture primarily use resources from each other’s production chains, and side streams of the food and feed industry and from food chains. Livestock will be fed primarily with grass, feed crops or side streams from the farm itself or from neighbouring farms.’ With her circular concept, Schouten intends to repair many problems resulting from the present agricultural model, tuned towards production for global markets at low cost. Circular agriculture should lead to less environmental pollution, better biodiversity, higher income to the farmer, less resources and food wasted, and less emissions of greenhouse gases. The nature conservation organizations were sceptical: too conceptual, not precise enough for the time being. Let her show what it will amount to in actual practice.

At the moment there are many legal obstacles to low external input farms, resulting from policies that promoted product maximization for decades. The minister will have to remove those obstacles quickly. An important bottleneck for circular livestock husbandry at the moment is that a lot of side products in the food chain are not allowed to be used in animal feed. Since 2003, the feed industry cannot use food waste for production of fodder for cows, pigs and chickens, because of risk of BSE and other conditions. In Japan however, 35 percent of food waste is used for production of pig fodder. After proper heating, the risk of contamination in the food chain is reduced to almost zero. On top of that, farmers have to inject manure into the soil now, whereas circular farmers would prefer their manure, low in ammonia, to be fermented into compost, that would have to be distributed on top of the land. That is also why circular farmers do not have to raise their cows in closed barns, as preferred by present policies, in order to reduce emissions of ammonia and greenhouse gases. The minister intends to remove such obstacles, but she has not published a firm action plan as yet. She does promise to frontrunners ‘to give them a firm backing for the innovations, experiments and circular investments that they have produced already in the past few years.’

The minister is right: circular agriculture exists for many years already in the Netherlands, also in this modern cloak. The network of farmers and advisors in this area is 20 years old already. Some 150 Dutch farmers apply those circular principles, in spite of the counterforce of existing policies. So far, policy always intended to promote maximum productivity at low cost for world markets. Even environmental indices have been tuned towards that policy goal. Sustainability in agricultural environmental policy for instance, is measured in effect per kilogram of meat or potatoes, or litre of milk, which will favour mass production. For circular farmers on the other hand, sustainability will rather be measured in low environmental effect per hectare. What will almost boil down to working with a minimum of external inputs. Circular agriculture will mean, consequently, that the logic of the entire sector will have to be revised.

Wageningen UR has a number of auxiliary branches where researchers experiment on these principles. One of them is De Marke, a dairy farm, that produces its animal feed itself. It uses manure and minerals as efficiently as possible, and therefore the need for an input of resources and energy is at a minimum. The farm does not use any phosphate fertilizer since 1993, and hardly any nitrogen fertilizer. The cows eat much silage feed and little feed concentrate; emissions of ammonia are low. Another branch is the Centre for Crop System Analysis in Lelystad; here, Wageningen UR researches the principles of circular arable farming. Its basis is a good soil with much organic matter. Such soils can contain a lot of water and are better draught resistant. They will retain more nitrogen and minerals, will produce a richer soil microbiome and will contribute to healthy plants. Fertilization is done with manure fermented together with straw, not with liquid manure. Ploughing is done as little as possible; for this would bring carbon compounds into contact with oxygen, causing them to escape in the form of CO2. The cultivation system prioritizes the healthy soil.

But something will have to change in agricultural economics too, for circular agriculture to become a success. Circular farmers will have to have a business model. Present policies result in a worldwide race to the bottom, with low prices for consumers as a benefit, but also with much food being wasted. Wageningen World cites agricultural economist Krijn Poppe, who judges that unpriced elements of agricultural production should be priced. Like phosphate deletion, and waste and greenhouse gas production. He suggests that animal feed companies should impose a deposit on minerals in animal feed. Farmers buying this feed should get a return when delivering the manure of their cows to the animal feed factory. He expects that this could close the mineral cycle between feed producing company and farmers. We judge that circular agriculture will also result in a wider choice of options in the farmers’ business models. So far, farmers can only generate a higher income by doing more of the same: more milk, more pigs etc. A circular farm will lend itself to differentiation, for instance by changing animal feed, by making other end products, or by offering another quality.

Circular agriculture is an excellent principle; but much work needs to be done before it will become common practice.

Bioenergy Australia welcomes the release of the Climate Change Authority’s Climate Policy Toolkit for Australia, which recognises the role of bioenergy in the transition to a zero-emissions economy. bioenergyaustralia.org.au/new… #climatepolicy #bioeconomy pic.twitter.com/P1URx6V1np

#offthegrid Links to LIVING OFF THE GRID #sustainable #solarpower tom-gillispie.blogspot.com/20…

My grandmother grew up in the Great Depression, so we kept a victory garden in our tiny backyard like it was mandatory. Never ran out of greens, tomatoes or grapes. They didn’t call it #sustainability back then. Wish I had her green thumb today. pic.twitter.com/yrhYwA9jdD