You are here: Home / 2015 / September / Towards precision agriculture with less environmental impact

In our interview with Rudy Rabbinge we also discussed the future of agriculture. Can it develop in such a way that it will keep on feeding the world even if its population would keep growing? And could it supply the feedstock for construction materials, clothing and polymers on top of that, in a biobased economy?

This is the second article resulting from a conversation with Rudy Rabbinge. The first article was published on 3 September. 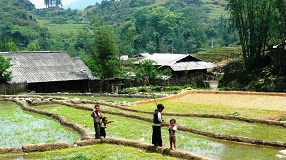 Precision agriculture in rice fields will raise yields and lower the environmental impact, because not enough reesources are left for counterproductive processes.

Rudy Rabbinge in convinced that yields can improve, with less environmental impact. He devoted his entire working life to a continuous reduction in the use of pesticides and herbicides; particularly by ‘controlled use’: application exclusively if and insofar as required. Whereas forty years ago, pesticides and herbicides were still used at pre-set intervals, modern agriculture uses them exclusively if the disease in question has been observed, and if there is good reason to predict unacceptable damage. Therefore, observation of the crop is very important nowadays. Has the disease been observed? Has damage been observed? Then act, if not: don’t. The rigorous application of these guidelines has resulted in the development of precision agriculture, a modus operandi that needs to be applied in the future anywhere in the world – a principle that squarely contradicts the indiscriminate and at times unnecessary use of an agent like roundup. Rabbinge: ‘Smarter management will not only reduce environmental stress but will also improve yields; most diseases and plagues result from mismanagement.’

‘Precision agriculture may well result in both better yields and lower environmental impact. Experience shows that the most efficient agricultural systems have the lowest environmental impacts. This is counterintuitive, but can readily be explained. In an efficient agricultural practice, all processes are recruited to serve production, leaving little room for other effects; for instance in irrigated rice fields there is little carbon left for anaerobic (and harmful) reactions. This effect has often been demonstrated, particularly in rice fields. Therefore, the future of agriculture is not in more extensive methods, like biological agriculture, but in more intensive methods that reduce environmental damage. A more extensive agriculture would result in more land being cultivated, without lowering the environmental burden. A more intensive agriculture will result in higher production on good land; as a consequence we can dedicate more land to natural areas. In order to attain such a continuous improvement, we should use every technology available, including genetic modification. We should only take exception to that rule if ethical issues were at stake. That might be the case with trans genetic modifications, like in the case of golden rice. But a discussion dedicated to that issue is impossible in the prevailing climate, in which many opponents of GMOs add all issues on one big heap, and keep confusing important and unimportant matters.’ 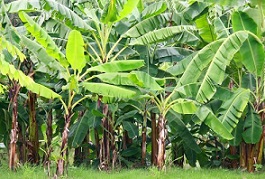 Genetic modification will assist us in developing banana varieties that are resitant to the panama disease.

The potential of GMOs – under certain conditions

And yet, Rabbinge understands why many individuals oppose the use of GMOs in agriculture, insofar as this results from Monsanto’s business model. For this model is squarely at odds with the requirements of precision agriculture. ‘Monsanto’s business model does not only threaten world food supply, it threatens the environment as well, because it reinforces our dependence on roundup. In the agricultural practices propagated by Monsanto, farmers kill the weeds on their land by roundup; subsequently they can sow crops that have been made resistant to roundup by genetic modification. But in the end, this will have the same consequences as any sustained use of herbicides: some plants will develop a resistance; or some harmful weeds may be promoted systematically and then cannot be controlled any more by conventional methods. Any form of chemical weed control will eventually risk leading to a vicious circle of more prolonged and more intensive control. We should on the contrary be able to get rid of all herbicides in the long run – an ideal that we might never achieve but that we should strive for. For instance, we should look much better at techniques that nature itself employs to control pests, and make use of them. An example of that is the control of moulds by yeasts, a technique that we introduced in wheat growing in the seventies.’

‘Nothing is wrong with green biotechnology as such, but something is wrong with the way in which it is applied. Granting patents on seeds will kill innovation instead of serving its cause, whereas we dearly need innovation in order to overcome both productive and environmental problems. The future of agriculture lies in producing more precisely, using less chemical agents; and GMOs may contribute considerably to such a future. GM technologies will allow us, for instance, to develop much more easily banana varieties resistant to the panama disease (a major threat to existing banana plantations worldwide). The same holds true for the potato and resistance to phytophtora. The development of varieties that produce medicines is much simpler if we use GM technology. And some possible developments hold great promises. For instance, very promising research is going on in the field of crops that capture their own nitrogen requirements; but in order to reap these benefits, we will need to make use of genetic modification.’

Summing up, Rabbinge envisages agricultural practices that are more precise and have less environmental impact, a model that would increasingly realise the ideals of precision agriculture. GMOs could play an important role in such a development. But, as he indicated in his interview: this holds true only if these could be developed in an innovative environment; not if scientific discoveries would continuously be shielded by patents, like in present-day practices.