We know that plants grow faster in CO2-rich environments. Horticulturalists enrich the atmosphere in their greenhouses with CO2 to ensure better productivity. Can we imagine fast growing plants that would capture CO2 from the air, and on a large scale? A carbon sink, as it were? Yes we can, and we can do it in such a way that this will also improve bad agricultural lands. 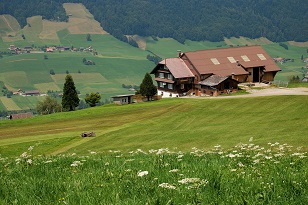 Our attention to this subject was drawn by an article on the site of the ​Finland Futures Research Centre (FFRC). It is now ten years since Tim Searchinger and colleagues drew attention to the major amounts of carbon dioxide released from land cleared for agricultural purposes. If crops for biofuels would be grown on this land, so they argued, it might take decades if not longer to offset these emissions. Their article was decisive in the creation of a new, much more sceptical attitude towards biofuels. But if major amounts of carbon dioxide could be released from land, couldn’t reversely lands act as a carbon sink in the form of new organic matter in the soil, a procedure that would contribute to land fertility on top of that?

This was the subject of a conference at the University of Turku, a year ago now. The organizers invited Larry Kopald and David Johnson from The Carbon Underground to give a presentation on How soils can help us tackle climate change. The intention of  the event was to provide innovative perspectives on the future of the bioeconomy and its ethical implications. This is also the main theme of the university’s Bioeconomy and Justice project. Larry Kopald painted a picture based on the soils’ natural ability to act as a carbon sink through photosynthesis and decay of dead plants and trees. In the history of our planet, vast amounts of carbon have been captured in the soil. According to him, the planet would need 250 billion tonnes of carbon to be captured in order to restore an equilibrium (the annual release of carbon into the atmosphere is about 200 billion tons, of which 9 billion tons from human activities and 1 billion tons from change in ecosystems). For this epic transformational cause, Kopald founded The Carbon Underground, a non-profit organization. The global problem is that the planet’s top soil has been degrading through bad agricultural practices, says Kopald, with chemical pesticides, destruction of biodiversity and industrial farming. The FAO warns that because of these practices, we might only have 60 or even in some places just 20 harvests left before the top soil totally disappears. We therefore need to regenerate soils’ health in order to feed the planet, and also to capture the maximum amount possible of carbon from the atmosphere. 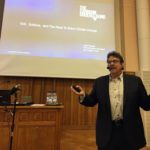 Now on this site we have always criticized suggestions that we could capture CO2 by the production of biomaterials in any significant amount. Yearly global CO2 emissions are so large that we would need to produce ten times more biomaterials than we produce plastics now (and think of the water we would require for that goal). But soils as a carbon sink – if such practices would be applied in agriculture all over the world, that could indeed have an impact. Although that would not be easy – it would amount to a reversal of many present agricultural practices.

Practical solutions for soils as a carbon sink

David Johnson, a microbiologist from New Mexico State University, has developed a slurry that could be very helpful in restoring healthy soils and turn them into a carbon sink. And what’s more: he openly wants to share the results of his experimentations. His findings suggest that we need soils with many fungi and relatively few bacteria. He produced a slurry for ‘inoculation’ of the soil to that effect. This is much like the mycorrhiza solutions that are produced and marketed by companies like the French company Inoculumplus. Johnson claims that he has even brought back to life arid soils; this would vastly expand mankind’s potential to feed the planet and store carbon. Together with his wife Hui-Chun he developed a bioreactor that produces this slurry. He claims that in just one year, farmers could renew their soils and turn them into a carbon sink by inoculation of the soil with the slurry and a process of green coverage. Seedlings can also be covered in this slurry, allowing it to affect the plant directly. Johnson is amazed that so much effort has been made to produce plants that survive in poor soils, when in fact we should reverse this approach and produce healthy soils.

The next stage would consist of managing these healthy soils by careful measures that capture and store as much carbon as possible, increasing the density and health of the soil while increasing biodiversity. This would serve food production and also help us fight climate change. Johnson aims to restore a symbiosis with nature in a regenerative agriculture, and quotes Tao Te Ching: align yourself with nature.

Interesting? Then also read:
Healthy soils for a productive bioeconomy
Food security in times of climate change
Reconnect with nature – the new sustainability