You are here: Home / 2018 / September / Healthy soils for a productive bioeconomy

If business site Forbes devotes attention to a subject as esoteric as healthy soils, we know that there will be business in it. As science has discovered the importance of the soil microbiome, this intricate ecosystem of microorganisms around plants’ roots, researchers all over the world start trying to unravel its miraculous properties. Many years of fertilizer use have reduced the content of microorganisms in soils around the world; this needs to be restored for agriculture to live up to the high expectations we have of it, both to feed the world and to sustain the bioeconomy.

‘In many of the soils that we’re dependent on, we’ve lost 40-60% of its organic matter,’ Dr Wayne Honeycutt of the Soil Health Institute said to Forbes. ‘That’s important because it’s critical for water holding, filtration in soil, and enhancing nutrient availability.’ Healthy soils have a minimum content of organic matter – a mixture of old plants’ roots rotting away, and the microorganisms feeding on this. The importance of organic matter may not primarily be the short-term productivity of the crop, but its resilience to extraordinary conditions like draught. Each plant seems to have an optimum composition of its microbiome, of which many species as yet unknown.

New business on the soil microbiome may revolve around an analysis of the DNA present in it, done among others by Trace Genomics in San Francisco. They sequence the DNA present in a soil and use it to identify what microbes are present, among others to detect risks of disease. With some less precision, scientists can also identify fungi. But, as professor emeritus Hans van Veen (Leiden University) says, ‘you would like to be able to take a soil sample, pass it through a sequencer, and then be able to tell for which crop or wild species this soil would be perfect. But this is still a long way to go.’ The ultimate goal of such research would be to find ways in order to promote both short term crop productivity and long term healthy soils. Much of our agricultural technology is still based on trial and error. As Van Veen says: ‘We now perform all sorts of tricks in the soil, often just directed towards short-term effects on crop growth, like ploughing or fertilizing. But then, we ignore the consequences on the microbiome and hence on long-term fertility.’ 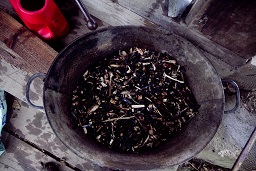 Van Veen mentions the positive effects of adding chitin to the soil, without us knowing how this works. Another trick is adding biochar in order to produce healthy soils. Biochar is the product of mild pyrolysis of biomass, and consists partly of elementary carbon. Biochar is used as a soil enhancing agent, but its properties are little understood as yet. Depending on the resource, the production process and the crop in question, biochar may be used for water storage in the soil, as a carrier for health enhancing microorganisms or for soil improvement.

The sorcerer’s stone lies in the identification and stimulation of microorganisms in the soil that protect plants against diseases and facilitate the uptake of nutrients. Soils may have a natural capacity, due to microorganisms, to produce nitrate from nitrogen in the air. Legumes are known for their synergy with such bacteria around and in their roots that do this. But an excessive use of nitrogen fertilizer, as has been done on many agricultural lands, will silence the genes responsible for this nitrogen fixing. A company that sells products to restore this natural capacity to agricultural land and produce healthy soils is Pivot Bio, which looks for microbes that can produce ample amounts of nitrogen for crops, then coats seeds with it so farmers can reduce – if not eliminate – their use of chemical fertilizers. Re-expressing genes that have been silent for decades, Pivot Bio claims that it’s been successfully testing their seed products for five growing seasons. 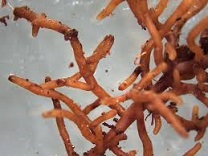 But to me, the most wonderful species to promote healthy soils are fungi that live in symbiosis with plant roots, mycorrhiza; so called after their role in the plants’ rhizosphere, its root system. The plant feeds the fungus with carbohydrates from its photosynthesis, and the fungus supplies water and mineral nutrients taken from the soil to the plant. Mycorrhizas can be located both outside and inside the roots, depending on the species of plant and of the fungus. Mycorrhiza perform outstanding functions for plants. Like resistance to diseases, such as those caused by microbial soil-borne pathogens. And mycorrhizas have been found to excrete enzymes that are toxic to nematodes. They can also enhance the plant’s resistance to draught and to salinity. And the summit of natural miracles: through mycorrhizal structures in the soil, plants can communicate with each other. When a plant is attacked by aphids for instance, it will release gases that ward off the insects; through their mycorrhizal communication system, they can induce their neighbours to do the same. Mycorrhiza are sold, among others, by the French company Inoculumplus.