You are here: Home / 2013 / November / Innovations across the entire value pyramid of the biobased economy

Agriculture, with its renewable feedstock, materials, textile fibres, food products and medicinal plants, has been the supplier of mankind with its livelihood for ages. By innovations, agriculture will again take up this role and contribute to the build-up of a biobased economy. 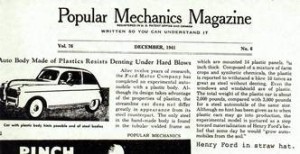 Henry Ford’s ‘car that grew from the soil’

Until World War II, agriculture was indeed the main supplier of almost all human material requirements. The war led to an innovative upsurge by the use of crude oil for production of transport fuel, ammonia and ammunition, and as the feedstock for polymers like nylon and PVC. These innovations drove forward the revival of the economy, equally fuelled by fossil energy. The vision of a modern use of renewable resources died away in the first years of World War II. For instance Henry Ford’s ‘car that grew from the soil’, produced from renewable feedstock, did not survive the fossil attacks (Popular Mechanics Magazine, Vol. 76, No. 6, December, 1941). 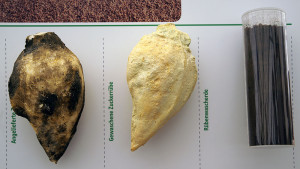 The sugar beet is the feedstock for many valuable substances. 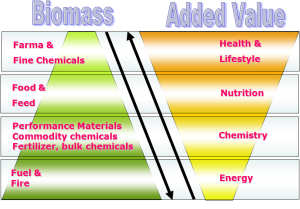 Agriculture, horticulture and stock farming produce feedstock and products for the entire value pyramid. Each layer in the pyramid hosts its own number of biobased innovations. The Dutch agricultural sector invests in green innovations for the entire biocascade. The EU project Phytosana develops resources for cancer chemotherapy from the root of the cow parsley (Anthriscus sylvestris). After fermentation, 97% of biomass remains as a side stream. This is rich in fibres and an excellent feedstock for biogas fermentation. (Bioactive plant ingredients such as this one are described in the Community Herbal Monographs and its application in the European Pharmacopoeia of the European Medicines Agency, a gold mine of high-value applications).

Neutraceuticals
Plant ingredients can also be used as neutraceuticals. The companies Meatless and The Vegetarian Butcher cooperate in a clinical trial to investigate the possible LDL cholesterol reducing action of lupine proteins. This research is done within the EU Project LUPICARP in which the university hospitals of Milan and Helsinki cooperate in filing an EFSA recognised health claim. Vegetal and animal feedstock also produces prebiotic food fibres that can substitute sugars and/or fats. Sensus for instance produces food fibres inulin and oligofructose from topinambour root. Products that could reduce the risk of malnutrition in elderly people can be produced from soluble food fibres and proteins from lupine. This research is conducted in the LupinSilver project supported by Groningen province. Color&Brain company, miller LIFrank and BCM housing and care company in Stadskanaal develop tasteful and nutritious lupine bread and prebiotic lupine drinks. 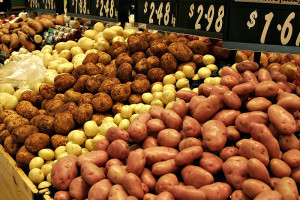 The potato, a resource for a complete portfolio of bioactive components.

Pure vegetal ingredients are a rising trend in cosmetics. Pure biobased resources such as oils, fats and bioactive plant ingredients are used to produce the majority of green cosmetics. Pure and solvent-free resources can be produced by extraction using clean technologies like supercritical CO2. Companies Emonta, Medex and Color&Brain develop new cosmetic products based on bioactive ingredients from herbs in the Phytosana project. Many agricultural crops are used to produce food and feed products. An innovative example is the valorisation of the entire starch potato to fibres, proteins and starch. AVEBE has succeeded in processing each potato fraction into ingredients for food and feed. The most recent milestone is the development of protein refinery from side streams of starch production by Solanic, a daughter to AVEBE. Solanic uses mild separation techniques at an industrial scale and produces fully functional protein fractions. The potato, containing more than 300 enzymes, thus becomes a resource for a complete portfolio of bioactive components that can accelerate the advent of a ‘green chemical sector’. Solanic also separates carotenes like lutein, a substance added as an essential ingredient to pig fodder, and which might partly prevent wearing down of the retina at an older age (Age related Macular Degeneration (AMD)).

Fibres
Vegetal fibres like flax, hemp, jute and cotton are used for production of textiles and also of reinforced biobased materials like renewable motor car parts. Hempflax company produces elements for concrete reinforcement from hemp. An important development is the substitution of glass fibres by biobased fibres in composite materials. These biobased fibres consist of woven or non-woven natural fibres as a reinforcement for materials like bio-epoxy resins. High performance applications have been developed by the company NPSP. Another example is the production of professional racing bicycles in which carbon and natural fibres are combined to produce stiff cycle frames that absorb vibrations, by Museeuw. 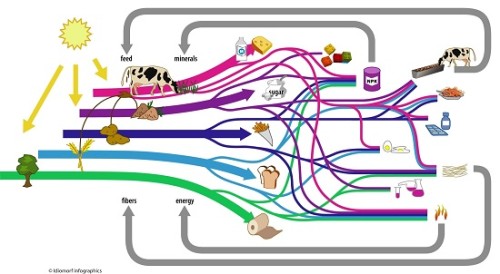 Almost 9 000 Dutch farmers grow more than 5 million tons of sugar beet for the processing industry on close to 70 000 hectares. Suikerunie produces crystal sugar (saccharose) from it, and specialties for the food processing industry. Sugar is an excellent feedstock for fermentation to bioethanol or to chemical building blocks like lactic acid, isobutanol or furanes. Lactic acid is the feedstock for bioplastics, isobutanol can be used as a biofuel or as a feedstock for other chemical building blocks, furanes are the feedstock for the production of biopolymers, coatings and glues. An advantage is that sugar does not have to be very pure for fermentation, on the contrary, the micronutrients in the unrefined molasses are essential for the growth of the bacteria and yeasts that perform the (bio)chemical reactions. Suikerunie produces a dedicated sugar juice for those processes, the feedstock for chemical building blocks on the one hand, and for crystal sugar on the other hand. Sugar juice therefore is the biobased ‘oil’ of the future, and the sugar factory the biobased hub. The sugar beet is entirely valorised, each component is put to good use. Again, the last process step is fermentation of the last side stream to produce biogas.

Lignocellulosic wood fibres are the feedstock for the paper and pulp industry and for cellulose and lignin. Biochemically, cellulose can produce ethanol (still a cumbersome process), lignin is an aromatic compound and therefore a feedstock for the coming lignin biorefinery that will yield products like Methanol/Dimethyl ether (DME), the solvent DMSO (dimethyl sulfoxide) and BTX (Benzene, Toluene and Xylene), as well as synthetic food additives like vanillin.

Fuels
Biogas is produced by anaerobic fermentation; but this process may be differently optimised for the production of relatively volatile fatty acids like acetic acid and propionic acid. Volatile fatty acids like these are a feedstock for bioplastic production. Finnish VTT, Delft Technical University and Attero cooperate in research in this area. This technology might even valorise one of the last steps in the biocascade.

Before really firing biomass in a power plant, thermal conversion techniques can extract some valuable products. Hydrothermal carbonisation, performed at high pressure and temperatures up to ca. 200 oC, will produce many carbon nanostructures with as yet unknown applications (as researched by the group of prof. Antonietti of the Max Planck Institute in Potsdam). At higher temperatures the reactions are called torrefaction, pyrolysis and finally gasification. Biomass will be gradually transformed to charred biomass (biochar), pyrolysis oil and syngas. Biochar is a possible agent for improvement of soil quality , and pyrolysis oil can be used as a transport fuel or as the feedstock for oil refinery after hydro deoxygenation (HDO, the removal of oxide groups). Syngas (a mixture of carbon monoxide (CO) and hydrogen (H2)) is a building block for the chemical industry.

If there are really no other options for using biomass, it can always be burned as an extra fuel in electricity production or simply for household heat production.

Plant nutrients
Biobased feedstock grows on a living soil that feeds plants and crops with (micro)nutrients. The elements of nitrogen, phosphorus and potassium are essential ingredients for vegetal growth. These elements can be supplied in the form of ammonium, nitrate of phosphate fertilisers. These fertilisers need to be recovered in order to close the natural loop and to prevent environmental pollution by these compounds. Phosphate is a limited resource and present proven resources amount to 20 to 40 years of the present depletion rate. Recycling phosphate from waste streams is essential for maintaining a sustainable crop production. That recycling is technically feasible, using technologies like struvite technology, used by potato processing and French fries producing company Lamb-Weston Meijer. The company of Duynie further processes the reclaimed struvite fertiliser for agricultural use.

The innovations in the biobased economy show a dynamic picture. In the coming few years, many new biobased products may come to the market, as companies invest on a major scale in green innovations. Henry Ford’s dream may eventually come true, leading us to produce a car that grew from the soil, that is fuelled by the sun, and that will grow from the soil again after use, for the next generation, the ultimate achievement!