The Dutch agricultural sector has one major problem: an excess of manure production as a consequence of the large livestock population. Dutch livestock farming depends on major imports of soy and other crops for fodder production. ‘At the end of the pipe’ this produces the manure problem. But biorefinery will enable Dutch farmers to arrive at a sound business case without any imports, and with a greatly reduced manure production.

Local feedstock to be competitive with cheap imports

Imported feedstock is cheaper than home-grown proteins and biofuels. The biobased economy will change that, because biorefinery will allow it to close the loop in a circular economy, even while retaining the large livestock population, and grow all fodder in the region. Decisive for this change is that nowadays agricultural side streams that had little or no value five years ago, can now be processed into valuable products. The revenues from these side streams now facilitate a business case in which locally produced fodder is competitive with imported crops.

Biorefinery adds value
A team of researchers from Wageningen UR, Haskoning DHV and CC Advies headed by Johan Sanders now have developed a model that would seem to be a breakthrough (published in Dutch only). They developed the case for the Achterhoek (literally: Back Corner), a picturesque area at the Dutch/German border. Biorefinery is the key. Firstly because using biorefinery, we can deliver the fodder in exactly the correct composition for cow and pig. Secondly, as stated before, side streams (like fibres) now represent an economic value. And thirdly because biorefinery can add value to products formerly discarded, like roadside grass and hulls. The model has been calculated for the Achterhoek, but with some adjustments it might fit other regions as well. The Achterhoek is a relatively sparsely populated area of 1,200 km2 (460 sq. mi.) of which 780 km2 (290 sq. mi.) in use for agricultural purposes. The number of inhabitants is 300,000. Cow livestock numbers 238,000. The area produces approx. 1 million pigs and 3 million poultry annually. 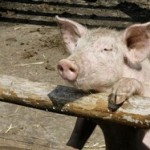 Less manure production at optimal food composition
At present, food composition for cows and pigs is not optimal. Fodder is not composed in such a way as to produce meat and milk as efficiently as possible, producing the least waste (manure), while retaining animal health and wellbeing. Firstly, animals are fed too much phosphorus, which ends up in phosphate in manure. Moreover, they do not get their proteins (essential amino acids) in the optimal composition, as a result of which they have to eat too much, resulting in an excess of nitrogen in manure. That in turn produces higher nitrate levels in ground water, and enlarged emissions of ammonia and nitrous oxide. Biorefinery can help to address both problems, in particular by a more precise dosage of proteins. 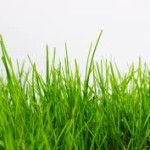 No more need for feed concentrates
Biorefinery would enable fodder industry to perform even better. Fibres form a major part of the yield of grass and maize; in their natural state, they cannot be well digested. But if these fibres are separated and ‘pre-treated’, they are better digestible and therefore the animal needs less food. This reduces manure production as well. This is quite effective: in this scheme, cows do not need any feed concentrates any more. Therefore, biorefinery enhances the efficiency of meat production while retaining the animal’s level of wellbeing.

Better protein distribution
Protein availability is crucial. Fodder industry uses much soy meal and other side products of (vegetal) oil producing industries, precisely because of their high amount of proteins and essential amino acids. But we might just as well feed pigs with proteins from grass, their composition is equally good. Grass however we feed to the cows, even though in proportion it contains too much proteins. Therefore, this cycle results in a number of problems: an excess of nitrogen in cow manure (resulting in ammonia etc. emissions), and soy imports to feed pigs (resulting in an excess of manure production). And moreover, proteins are not used efficiently: the cycle has a low food efficiency. Here, economy and ecology point into the same direction. 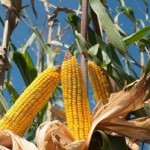 More efficient use of maize
Maize (and wheat) refinery is technologically less advanced than grass refinery. In course of time, maize refinery might play an important additional role in the new cycle: because this would produce starch from maize that would be excellent pig feed, whereas at present farmers often ensilage maize in order to feed it to cows at a later stage. This efficient use of maize (and the availability of proteins from grass) will allow pig farmers to feed their animals exclusively on locally produced food.

Exchange of crops
The entire circular system boils down to an intricate exchange. We will separate the amount of proteins and amino acids in grass that cannot be incorporated by the cow, and feed it to the pigs. Parallel to that, we increase digestibility of grass fibres for the cow, which results in a lower intake of maize starch, a fraction we may subsequently feed to the pigs. In this way, pig fodder may be produced to a much larger extent from locally grown crops. The entire process will produce not only meat and milk, but biogas and ethanol as well, which we could either use for process heat production, or sell on the market.

Towards more local employment
The execution of these ideas would lead to the creation of new jobs. Maize refinery will have to be done in small factories, grass refinery can even be done in mobile equipment that the farmers could host temporarily. Such small-scale installations will have the advantage that minerals from the yield, insofar they are not required for fodder, may be returned to the land right away.

Win-win-win situation
But execution of these ideas might also require new forms of cooperation among a large number of participants. Farmers raising cattle and pigs will have to cooperate, and these in turn with producers of maize and grass, and with fodder producers. The flow process diagram shows the intricate relationships between partners in such a regionally optimised economy. The idea is to arrive at a win-win-win situation, in which farmers profit from a better return on their crops, and from reduced spending on manure treatment. That will have to make up for the difference in feedstock costs between locally produced fodder, and fodder on the basis of imported soy. If that scheme would work, we will only get to know if sufficient stakeholders are willing to participate in the experiment, and would succeed in funding the program as well.

1 thought on “Biorefinery as the key to the circular economy”

What steps can automakers take to adopt a #sustainability-first mindset to future-proof supply chains, innovate processes, and drive overall business growth? Listen in as industry-experts discuss the best way forward on this #SAPRadio episode sap.to/6019MfDYf pic.twitter.com/VWo9sMD8kn

If you have a sustainable #foodie on your list, then we have the perfect gift idea for you❗️ Includes a selection of #local, sustainable and #circular food products — and some dish soap for clean up! To order: guelphbox.ca/collections/al… ♻️🌎🍎 #ReimagineFood #GuelphBox #Upcycled pic.twitter.com/WAX40vh1Z6

The Federal and Northern Territory governments are investing $2.3 million under the Recycling Modernisation Fund to improve waste processing capacity across the Territory. #wastemanagement #circulareconomy #northernterritory wastemanagementreview.com.au/…

How can you use metrics to track progress? Leverage these metrics, focusing on: data center energy, computing, and waste materials. #GartnerIO #sustainability pic.twitter.com/EFQ7XfxAtd

NAEE in the UK
@NAEE_UK

Linear Thinking, Exponential Functions, and Steady State Systems – Part 1 - Richard Jurin, before his retirement, led the Environmental Studies programme at the University of Northern Colorado, where he launched a degree in #Sustainability Studies.  naee.org.uk/linear-thinkin…

#IN "Less than 18% of all #IT equipment is properly recycled." #GartnerIO #sustainability pic.twitter.com/q2F9CDLoES

#IN What's a "typical" distribution of #IT equipment GHG emissions? #GartnerIO #sustainability pic.twitter.com/n7C1vjHcOp

Antonio Neri’s bold #vision is #transforming Hewlett Packard Enterprise to become #Edge-to-#Cloud company. Thanks to #HPEGreenLake platform we can offer customers like The Ryder Cup new opportunities to #grow their #business in a #sustainable way, driven…lnkd.in/gQFCg7JK

@ndtv If it can be 49.5*c in Canada at place where temperatures dip below -20*c, you can certainly picture that. #Climate #Environment #sustainability #weather