The world needs a fantastic amount of knowledge, for its sustainable development, and in order to feed all new mouths. According to the OECD, we need to open three new universities every week of 30,000 students each, in order to cope with the four-fold increase in demand for people with higher education in the next twenty years, to a total of 400 million students. We will not achieve that by doing more of the same (building classical universities in brick), we will have to revert to internet. And that development started already. In the US, 2012 was the year of MOOC: Massive Open Online Courses. 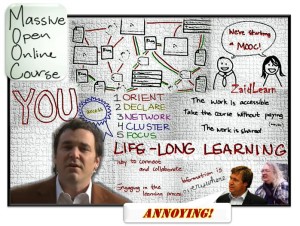 A tsunami of new students

‘According to directors of American elite universities like Stanford, MIT and Harvard, a tsunami of developments is coming our way,’ says Timo Kos, Director of Education and Student Affairs at Delft Technical University, ‘and that will be channelled in MOOCs.’ Those who have come across this way of teaching will know the names of Salman Khan and Sebastian Thrun. The first started offering online tutoring for free, using short instruction clips, and the second turned this into a major, indeed a mass phenomenon. Salman Khan erected the Khan Academy, in which he offered an ultra-short course on certain subjects, as a kind of condensed internet class. Then Sebastian Thrun, a Stanford professor, Google director and co-inventor of the Google glass, expanded the idea to a world-wide virtual academy. He quit his job and started ‘Udacity’, one of the three major MOOC institutes now. The other two are ‘Coursera’ (in which the first two letters are written in the form of an infinity sign), and ‘edX’ (started from Harvard and MIT) that aims to educate one billion students. They all have been erected in 2012, and grew faster than Facebook in that year right away. 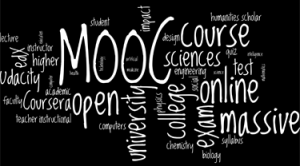 Peer-learning en peer-grading
Of course, education through internet was there long before, but MOOC is different. It consists of academic courses, most of them devised by professors at elite universities, who assign a signed certificate to the student, after passing the exam and an identity check. Peer-learning belongs to their modus operandi, and so does peer-grading for checking exams. For instance, a new way of establishing someone’s identity is to identify his or her touch on the keyboard, which apparently is as unique as someone’s fingerprint. These are certificates that contribute to someone’s career. And in this way, courses are able to handle large amounts of students in very precisely tuned courses. The first experiences are hopeful; half of the students stops after the first contact, and these courses have about the same percentage of students that graduate at the end of the course as the classical, brick university. The courses on a limited subject are free of charge, but now fully online master courses have been set up that are charged, at about one tenth of the same course at an elite university. Of course, many organisations and individual tutors have entered this profitable market, including moonlighters in many forms. ‘But surprisingly enough,’ according to Timo Kos, ‘the good courses surface quickly, and students learn to know fast which education is best.’ At first, China did not have a part in this development, because Youtube is blocked there, but already a Chinese variation on edX (XuetangX) has emerged.

Offer courses that hardly existed so far
His own organisation Delft Technical University has started two courses this year (2013): one on Solar Energy (57,000 participants, 4,000 to the exam), and one on Water Treatment (about half that size and half the entrants to the exam). All courses are in English, last for 10 weeks and require at least 8 hours per week. MOOCs offer a number of new opportunities: the entrance of more female technology students who are in great demand, and – for our subject in particular – the possibility to offer courses at a number of levels in subjects that are hardly available as yet, like biobased subjects.

@animaljusticeAU @AustralianLabor @tanya_plibersek 🛑 #Australia DON’T BUY THE GOVERNMENT’S SPIN Is this any way to treat a national icon? The multibillion💰commercial #KANGAROO industry and government is launching its own campaign to try to sell its #sustainability & welfare credentials. THEY ARE LYING! abc.net.au/news/2022-05-0…

@hvgoenka Nowadays we are taking care of #Sustainability