One of my favourite blogs on internet is Evolving Excellence, devoted to spread the idea of lean production. A recent blog by Kevin Meyer struck me as particularly to the point. It is about human error in industrial (or indeed any other) operations, based on an article by Steven Shorrock, ‘one of the most insightful articles I’ve read in a long time’, says Meyer. We will closely follow both Meyer’s blog, and Shorrock’s article.

The idea that heads should roll
Shorrock starts out from the following observation. ‘In the aftermath of the [Spain rail] accident, initial investigations ruled out mechanical or technical failure, sabotage and terrorism. That appeared to leave only two possible explanations – ‘human error’ or ‘recklessness’, or both….’ When something bad happens, says Meyer – an accident like this, an inappropriate comment, a disastrous rollout of a website – we seek action, fast. We want accountability, and usually by that we mean rolling heads. Rarely do we probe further into the context of the event, and especially into the system.’ 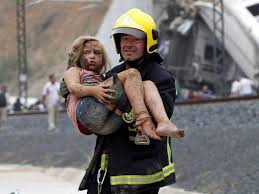 Shorrock: ‘Several claims appeared about the driver in the media, often without relevant context. It was reported that the driver “admitted speeding” on the occasion of the crash. However, there appears to be no evidence that the ‘speeding’ involved conscious disregard for, or indifference to, the dangers of the situation or for the consequences of his actions. This would have been an extreme act. Rather, it seems that the driver was unaware of the context. This hypotheses invoked ‘human error’ explanations, though carelessness was implied. It was reported that the driver himself told the judge that he was distracted and suffered a “lapse of concentration” as he approached the curve. Just minutes before the derailment, the driver received a call on his work phone.’

A term devoid of explanatory power
Shorrock then raises the question, if we should unequivocally want to attribute ‘blame’ to someone, whether the driver should be on the receiving side. Maybe the system was ill-devised as well? The train driver would have had to reverse to manual. ‘The ‘reversion to manual’ problem has been studied extensively in the context of automation and manual operation. The distracting effects of phone calls – hands free or not – are well-documented. ‘Multitasking’ is known to have devastating effects on performance, yet conflicts between safety and efficiency goals often demand that we switch from one task to another in a given timeframe.’ The term ‘human error’ in this context would then come close to be an umbrella for a great multitude of actions, unrelated among themselves, and therefore devoid of explanatory power. ‘When something goes wrong, complexity is reduced to this simple, pernicious, term. ‘Human error’ has become a shapeshifting persona that can morph into an explanation of almost any unwanted event. It is now almost guaranteed to be found in news stories pertaining to major accidents.’

The term should be abandoned
And then eventually, Shorrock comes up with the reasons why he is abandoning the term:
•    ‘Human error’ is often a post hoc social judgement. ‘Human error’ is one of few things that often cannot be defined unambiguously in advance of it happening.
•    ‘Human error’ requires a standard. To know that something is an error, it must be possible to describe a non-error. This can be surprisingly difficult, partly because there are so many “it depends”. In the context of complex interacting systems such as ATC, there are many ways to get an acceptable result.
•    ‘Human error’ points to individuals in a complex system. In complex systems, system behaviour is driven fundamentally by the goals of the system and the system structure. People provide the flexibility to make it work.
•    ‘Human error’ stigmatises actions that could have been heroic in slightly different circumstances. What are described as heroic actions could often have been described as tragic errors if the circumstances were only slightly different. The consequences of heroic actions are not known in advance.
•    Underlying processes of ‘human error’ are often vital for task performance. In the context of error, we often refer to psychological activity involved in perception, memory, decision making or action. Taking one example, without expectation, radio-telephony would be very inefficient. Occasionally, one may hear what one expects instead of what is said, but this must be set against improved efficiency during thousands of other occasions.
•    ‘Human error’ is an inevitable by-product of the pursuit of successful performance in a variable world. The context and conditions of performance are often vague, shifting and suboptimal. The ability to adapt and compensate comes at a cost.

Meyer sums up: ‘The need for standards, the importance of context, the fine line between error and heroism, and perhaps even the positive aspects of error when pushing boundaries.’ Shorrock would prefer to use the concept of ‘performance variability’. ‘This is not simply a replacement term or a euphemism, but a new way of thinking that acknowledges how systems really work. Performance variability, both at an individual level and at a system or organisational level, is both normal and necessary, and it is mostly deliberate.’

And Meyer concludes: Something to think about next time an incident happens and you feel that instinctual urge to blame, instead of understand.

The time to act on climate change is now. The devastating impacts are already being felt and future generations are counting on us to take action. Let's transition to renewable energy, reduce our carbon footprint and create a sustainable future. #ClimateAction #Sustainability🌍💪🏼

I've just updated my webpage with some great articles. Check it out pastorbobbysretreat.com/?shar… Special thanks to @bdalzyz18864450 @niscifest @NDSUSpectrum #sustainability #happiness