So far, the laws of marketing have been insufficiently dealt with in our articles on biotechnologically produced food, and consumer reaction to it. In marketing, all revolves around a very old principle: how do I position my product on the market? Because that determines to a large extent the profit margin that I can make on it.

This is the seventh article in a series on public acceptance of biotechnology in food production. The articles appeared on 18 February, 2 March, 3 March, 10 March, 15 March, 27 March and 3 April.

Aspirin tablets: ingredients cost about € 2 the kg, they sell at tens of Euros the kg.

There is a big difference between products for businesses and products for consumers. Most companies will know all the details, and therefore in the B2B market, there is little room for nice talking, and margins are modest. Consumers, on the B2C market, are much more sensitive to suggestions that the product has a lot of extras. The old example of aspirin still is illustrative. One buys aspirin to get rid of the headache, and many people do not know whether 1 or 5 Euros would be an adequate price for a handful of pills. But the producer of those pills has an entirely different mind-set. He would like to buy his acetyl salicylic acid, because that is the substance in question, of indisputable quality and at a competitive price. Now some € 2.- the kg. The consumer just paid some tens of Euros the kg. 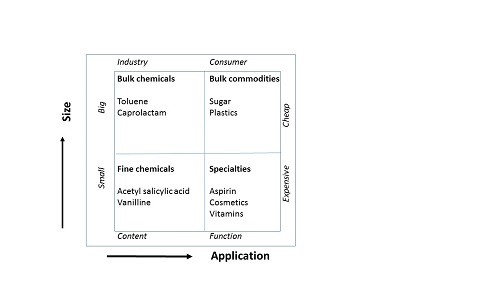 In industry, Kline’s quadrant is used to show the logic behind this. At the left are B2B products, at the right B2C. At the left, the specifications of the product are decisive, at the right the effects. Insofar as clients are more interested in the effects, they lose sight on the identity and price of the constituents. Human vanity carries the highest price, considering the nonsense that cosmetics producers write on their packaging and the prices we pay for those nice pots. And at the garden centre, take a closer look at all those small well-designed packages containing special fertiliser for a great variety of plants and flowers. Producers may be smart enough to adapt colour or grain size; but usually, the special product will not differ much from lawn fertiliser or the farmer’s NPK.

Many producers have a dream: positioning their product on the market on its performance: as a performance product. But many of them experience difficulties in doing so. First of all, the producers of fragrances. As long as fragrance, smell and taste of a nutraceutical were not yet easily measured, the producers could very handily talk their clients into the belief that here they had the best quality available. The proof mostly consisted of appearance, packaging, constant quality and a few well-picked demonstrations. Suppliers of inks and toners had the same approach. But as over time, science could better unravel and specify those parameters, it became increasingly difficult to appease their customers with well-chosen sales pitches. Increasingly, these would have a number of identifiable specifications at hand, to which the product would have to comply. Talks became much less friendly, more business-like and prices went down. Products tended towards the left column in the Kline quadrant, with many consequences for profit margins. 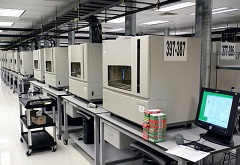 In the lab, they often know precisely what is in the product, and its properties…

Discussions in the boardroom

Companies in the business of biotechnologically produced food are in the middle of this discussion. And they complicate matters unnecessarily for themselves. Probably, most of the time there is a struggle going on between inventors and market strategists, or between production branches and the top. Production managers will tell you:
–    our biotechnologically produced food is entirely unambiguous and identical to natural products, and we can establish that exactly, with the best and most up-to-date analysis techniques;
–    regulation requires increasingly better transparency and risk analyses; we can deliver those in great volume;
–    we can specify the effects of our product in or on the consumer in great detail and even at a molecular level.
In short, scientifically trained developers dig themselves in, in the lower left of Kline’s quadrant. And if the buyer really understands that body of information, discussions over price are quick. No much room for some extra money for surprising positive properties. 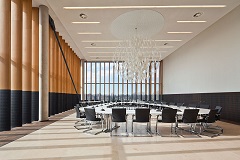 … but in the boardroom, discussions often are about completely different subjects.

In the boardroom and on the marketing floor, discussions have an entirely different ring. We already avoid the nasty term of genetic manipulation and talk of modification instead. Moreover, there is such a number of ways to modify an organism that the entire discussion on genetic modification has become a bit senseless by now. And our product has no trace whatsoever of its production technology. Then we have the question of how to position our biotechnologically produced food. Of course we do not position it on its content and its identifiable specifications. We do discuss that with our business partner, the company that processes its product for the B2C market, but that partner will have to keep in mind the consumers and be able to suggest that we have something special at hand, an extra; etcetera etcetera. In short, producer and processor team up to suggest consumers that they have a perfect product in their hands, a product that even has extras: better for the baby, better for the environment, more sustainable, better for the skin, better for health. Nothing beats selling such a product to insecure or ill-taken clients, conveying to them suggestions of security and health. The psychology of innovation, or rather the psychology of trade.

The battle between developers and marketers has a long history and will probably continue for long. Marketers are in the business of suggestions, even unrealistic suggestions. We feel that we should demystify their trade. That is a prerequisite for an honest discussion on the real question: the effects of biotechnologically produced food – in scientific or medical terms. In both areas, science and marketing, discussions take place; they should rather be kept apart.

Although we intend to demystify discussions, we do not have a purely demystified world in mind. We can certainly value the odd one out that does succeed in securing a reputation or a respected trade name. In the last resort, we do not wish to use merely 100% reliable, completely analysed and a thousand fold certified products with an explanation to the molecular level of their composition and production method. We need some mystery in our lives. We do have a different perception of time on a € 1,000 Swiss watch than on a device bought on the market or at the beach, don’t we?