You are here: Home / 2015 / March / Synthetic biology in food production

Last year, Friends of the Earth launched a campaign called ‘Extreme Genetic Engineering in Your Ice Cream?’, directed against ‘natural’ vanillin produced by genetically modified yeasts. It got assurances from major ice cream producers like Häagen Dasz that they would not use this product but would stick to vanillin extracted from the vanilla orchid. But the issue is far bigger than ice cream. This could revolutionise the production of our premium foods – or not, if ethical issues and public acceptance would stand in the way.

This is the second article in a series on public acceptance of biotechnology in food production. The articles appeared on 18 February, 2 March, 3 March, 10 March, 15 March and 27 March. 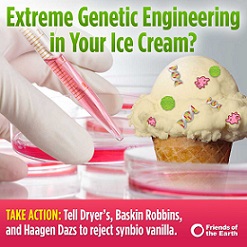 Campaign poster by Friends of the Earth against Evolva’s vanillin.

First some clarification of the issues. The global vanillin market is dominated for 90% by vanillin produced by chemical processes using (petrochemical) guiacol or lignin (from wood) as starting material. It has a purity of 99,9% and has been on the consumer market for the last 50 years. The annual consumption in food applications is about 20.000 tons; this product is sold at typically € 10-15/kg. Natural vanillin (annual production ca. 2.000 tons) is used exclusively in premium products (like premium ice cream and recipes in the haute cuisine). It is harvested from the fruits of the vanilla orchid that grows in the tropical rain forests of Madagascar, Mexico and Southeast Asia. Natural vanillin is a mix of closely related chemicals, of which vanillin is the main constituent (80% or more). Prices are very variable, in the range of € 700-2.000/kg for the complex natural product.

Recently, the Swiss company Evolva started producing pure vanillin from sugars by fermentation, using genetically modified yeasts. The product is chemically pure vanillin, comparable to the synthetic vanillin on the market so far, and therefore not equivalent to the natural vanillin mixture. Please note that no modified organisms or parts thereof will end up in the product. The modified organisms are just the ‘work horses’. The principle of the process is fully comparable to the engineered fungi employed in the industrial manufacturing of antibiotics such as penicillins and cephalosporins. Evolva asked for permission to label their vanillin as ‘natural’, arguing that it was produced by the natural process of fermentation. The age-old process in which yeasts are used to ferment alcohol from sugar must have been in their minds. And it was granted that permit. 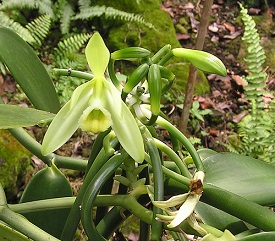 But on the other hand, Friends of the Earth, an international NGO concentrating on sustainability issues, argues that this vanillin is produced by ‘extreme genetic engineering’, by which it means synthetic biology. In synthetic biology, researchers create synthetic DNA or modified DNA from other organisms, plants or even animals which they introduce into existing fast growing organisms, with the effect that the organism will produce the desired product. Friends of the Earth is a long-standing opponent of genetic engineering and feels that human food produced by the intermediate of synthetic biology crosses a line. Challenged too, of course, by the permit to label the vanillin produced in this way as ‘natural’.

Friends of the Earth’s main argument against the new ‘natural’ vanillin refers to:
– its production by means of synthetic biology;
– the fact that the product produced in this way does not have to be assessed for health effects;
– the subsequent labelling of the product as natural;
– the economic effect on natural vanilla farmers and their contribution to maintain intact rainforests.
In their view: the first targets of companies like Evolva are for biotechnologically produced food ingredients robbing the high-value, rare products from tropical smallholder farmers. Given the fact that 90% of present vanillin is chemically produced (without detrimental effects to small farmers or tropical forests) and the real natural vanillin is a small niche product, this is not a very sound argument. It is therefore no surprise that Evolva says it will target the 90% low-value synthetic vanillin on the market. Third world smallholders would not be affected.

So far, much hinges on the use of the word ‘natural’. In tomorrow’s article, we will dig into some consequences of that.