Modesty is not one of the obvious virtues of the RethinkX authors. The subtitle of their report Rethinking Transportation 2020-2030 (May 2017) reads: ‘the disruption of transportation and the collapse of the internal-combustion vehicle and oil industries’. Brought about by the advent of Transport as a Service (TaaS). Again: do the contents of the report fulfil the promise of these words? 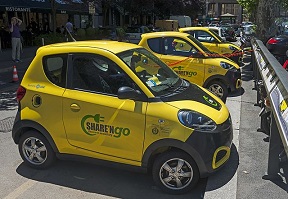 Of all sectors in our society, transport is the most obvious candidate for better efficiency through restructuring. People value their private cars so much that they spend a disproportionate amount of money on these toys for grown-ups. If they would share their cars and/or use public transport on a massive scale, they would spend much less on their mobility. This has been the state of affairs for a long time already. And this era of the private motor car has not been brought to an end by increasing car-sharing opportunities. Three new factors might now announce the end of this era:
– new software developed by taxi and car-share companies like Uber and Lyft, that facilitates the adoption of new systems
– entry of electric vehicles (EVs), that live much longer than cars with an internal combustion engine (ICEs)
– new opportunities offered by autonomous vehicles, that will become standard.
These factors can now be combined to form the fundamentally new product, Transport as a Service.

The case for Transport as a Service

TaaS will start on the basis of ride-hailing, offered by companies like Uber and Lyft. Through them, consumers have already got accustomed to the concept of Transport as a Service; they just need to download some software on their smartphones and order the service. The move towards TaaS (same service, but in principle without a driver) will start in high-density cities (p.28). There, the availability of private transport without having to bother about parking space will make sense. From there, the authors foresee a very rapid adoption, as TaaS radiates outward beyond larger urban areas toward suburban areas, smaller cities and then rural regions. In the end, of course, Transport as a Service will become mainstream. Its use will plateau on a high level.

The case for Transport as a Service is firmly rooted in simple economics, particularly in densely populated areas. As the Rethinking Transportation report summarizes (p.22), TaaS is cheap because:
– shared cars are used 40% of the time, 10 times higher than individually owned vehicles
– TaaS vehicles will drive 500,000 miles over their lifetimes — 2.5 times more than individually owned vehicles
– TaaS vehicles significantly reduce other operating costs, because EVs are intrinsically more reliable and efficient than ICEs.
Simple economics, so it would seem. But these maths have been overlooked for a long time. Not just by car owners, but surprisingly enough also by most mainstream analysts. They took the private car for granted and failed to account for the economic impact of better utilization rates, longer lifetimes and economies of scale.

Transport as a Service will lower costs

Additional factors potentially driving TaaS prices lower, according to RethinkX (p.22):
– other revenue sources like advertising
– provision of back-up support to grid companies during peak demand for electricity
– second life of batteries, for instance for grid storage
– efficiency gains in EV design and manufacture
– cheaper manufacture, more miles per EV
– reduced maintenance costs, for instance through modularization of assembly and replacement parts
– vehicle differentiation on the basis of a standard hardware platform
– cost savings relating to safety factors.
The authors foresee that car sharing will become common in TaaS cars, driving costs further down; because the per-mile cost will be shared among the occupants. ‘This will not only blur the distinction between public and private transportation but will also most likely lead to a virtual merger between them.’

It is hard to argue with these points, because they are so firmly rooted in common sense. But preference for the private car may still stand in the way of a more rational transport system, as it has done for so long. RethinkX is of the opinion anyway that the time for Transport as a Service has arrived. If the change sets in, effects will be massive and far-reaching; economic, environmental, geopolitical and social. 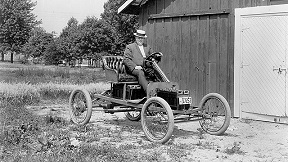 Economic:
– there will be major savings in transportation costs. Households can spend much more on other commodities
– the number of motor cars around will be much lower. Demand for new cars will drop dramatically. The value in the passenger transport sector will be mainly in vehicle operating systems, computing platforms and the TaaS platforms
– oil demand will fall, with a ‘catastrophic’ effect on the oil industry (including oil producing countries and oil infrastructure), through price collapse
– there will be a substantial job loss in the oil sector; policies will be needed to mitigate these adverse effects.

Environmental:
– if we assume a concurrent disruption of the electricity infrastructure by solar and wind, we may see a largely carbon-free road transportation system by 2030.

Geopolitical:
– the geopolitical importance of oil will vastly diminish. Although this may give rise to new geopolitical risks. It is unlikely that car batteries (for instance the lithium contained in them) will produce comparable global dependencies as oil. Lithium is a stock, while oil is a flow.

Social:
– transport as a Service will dramatically lower transportation costs and create a vast consumer surplus.
– it will contribute to cleaner, safer and more walkable communities.
– car sharing may emerge as a dominant pattern. Transport as a Service may develop as a new form of public transport. Corporations might sponsor vehicles or offer free transport to market goods or services to commuters. Developments that may also be supported by municipalities.

So potentially, we are on the cusp of a profound disruption of transportation patterns. RethinkX projects that by 2030 already (depending on the regulatory approval of autonomous vehicles), 95% of passenger miles in the US may be served in the Transport as a Service business model. This disruption, they propose, will be driven by economics. In the US, the average family may save 10% of its yearly budget on using TaaS instead of the private ICE car. 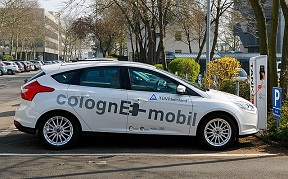 But maybe, RethinkX didn’t even fathom all consequences of Transport as a Service. In the book Resource Revolution by Stefan Heck and Matt Rogers we find the same proposals. But there, they describe even more far-reaching consequences.
– if vehicle behaviour on highways should be controlled electronically (train formation), we need much less highway
– system changes: if there are less accidents, safety requirements in the car can be reduced
– dealers might be cut out of the system.
In other words, we will deal with a real systems change.

Moreover, the book identifies system advantages of electric cars:
– batteries on the floor, hence better road-holding and safety
– no transmission and cooling required
– less maintenance, and remote software updates.
The competitive edge of electric cars is heavily dependent on the cost of the battery. These costs have come down from $ 1,000/kWh in 2008 to some $ 100/kWh now. Nothing will stand in the way of the breakthrough of the electric car anymore.

Disruption of the existing system

RethinkX: ‘This report presents overwhelming evidence that mainstream analysis is missing, yet again, the speed, scope and impact of technology disruption.’ The dynamics of the system will be unleashed as adoption of TaaS begins. And this ‘will create a virtuous cycle of decreasing costs and increasing quality of service and convenience, which will in turn drive further adoption along an exponential S-curve. Conversely, individual vehicle ownership, especially of internal combustion engine (ICE) vehicles, will enter a vicious cycle of increasing costs, decreasing convenience and diminishing quality of service’ (p.6).

There will be major disruptions in the existing system. The car system as we know it can break down, with all value invested in it and the jobs it offers. On the other hand, a new system will emerge, partly with other players. This may offset the negative effects. Or not, the net effects are difficult to calculate. We should keep in mind that an important effect will be that money will be transferred from transport to other economic sectors. But the surprising point in this transformation is that it will be driven by cost: consumer self-interest and calculation. Could the authors of the RethinkX report have found stronger motives?

Interesting? Then also read:
Battery technology in fast development
Tetraethyl lead, the scandal that never erupted
The energy transition is a digital transition too