You are here: Home / 2021 / November / RethinkX: the new Organizing System

In comparison to most utopian views, RethinkX devotes a lot of attention to the Organizing System required for the transition. It stresses that we cannot just rely on technological innovations. Our thoughts and systems need to coevolve with the new opportunities. A process that will be difficult and might fail. But we cannot circumvent the need for such a change. 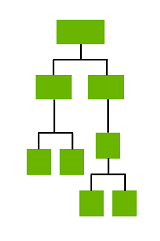 The Organizing System of a society, RethinkX explains, ‘encompasses the prevailing models of thought, belief systems, myths, values, abstractions, and conceptual frameworks that help explain how the world works and our relationship to it.’ This system exists not just in people’s minds, it is also embedded in the political, social, and economic systems of a society. It is reflected in business models and value chains. In Western society for instance, it manifests itself in the scientific method and democracy.

Successful Organizing Systems, so RehinkX stresses, ‘help societies capture the possibilities opened up by technology and create the conditions for further technological progress.’ In short, technology and Organizing System coevolve. The latter ‘creates the conditions that enable technological progress’. Conversely, ‘its own evolution is affected by the technologies that develop under its guidance’ (p.24). Technology and Organizing System form a complex unity. These combinations ‘emerge (self-organize) over time through experimentation (trial and often painful error) and competition.’ It is as if we hear the old Karl Marx rephrase in modern terms his ideas on substructure and superstructure of society (but the authors of the RethinkX project do not refer to Marx – it might have been bad for their business). 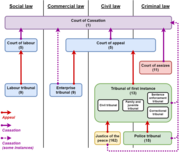 Example of an organizing system. The judiciary system in Belgium. Source: Wikimedia Commons.

These ideas have profound implications. ‘While the technological capabilities dictate the potential (the ‘capability frontier’) of any civilization, the Organizing System determines how close to this potential a society can get (in terms of its societal capabilities).’ For Organizing Systems determine our thoughts, to a large extent. They define the structure of corporations and government; and hence the opportunities that any society lends to its citizens. Successful societies throughout history were characterized by the close match between their technological capabilities and Organizing Systems. And although the latter are human constructs, they can seem to be incontrovertible and unchangeable to the contemporaries. One thing is for sure however: they change. ‘What was once seen as a fundamental truth becomes little more than a footnote in history’ (p.25).

These ideas are challenging for authors who hold that technological developments will fundamentally change society within a decade. Indeed, if not taken care of properly, the disparity between Organizing System and developing technology ‘will ultimately lead to the collapse of our civilization’. We need to change! ‘But while a new system with extraordinary potential is possible, its emergence is far from inevitable. In fact, the path to get there is fraught with danger’ (p.58). For whereas technology is driving a breakthrough, resistance to change may drive us to collapse. Our present Organizing System is still tuned to the needs of the industrial society; if we don’t change it, we will ‘follow the course of all previous civilizations and collapse back to a lower order’ (p.59). 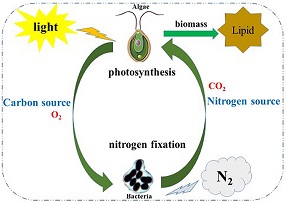 On the one hand, the authors hold that we can facilitate the change to a new Organizing System: by rethinking the future, enabling the future we want, and bridge the journey. On the other hand, they are just as convinced that we cannot plan the new system. What remains is a process of trial and (painful) error (p.62). But they do point to the weak points of our present system: determinism, centralization and uniformity. The new system will rather mirror the self-organizing rules of biological systems. This ‘will increase our resilience and allow us to prioritize the benefit of the network (whole) over the individual’ (p.63).

Therefore, success in this process may come from unexpected places. Not from centralized and highly organized societies, still under the spell of the Industrial Order. In a globally-competitive world, so the authors write, smaller, more eager, more adaptable communities, cities, or states are more likely to develop the winning Organizing System. ‘They will appear, just like their predecessors, as if from nowhere, with capabilities far beyond those of existing leaders’ (p.64). So opportunities might appear in Africa, with weak central governments and few centrally organized facilities. Helpful in winning the new game will be openness: to new ideas, innovation, and people. Don’t forget, open immigration has been essential to previous civilizations that emerged as leaders (p.65). Nevertheless, the transition may be difficult and involve a lot of struggle.

An open mind and decentralization

The new system needs to run on two tracks. Firstly, it needs to be highly decentralized. Characterized by experimentation, iteration, and a willingness to fail and learn. ‘Flexibility and adaptability will need to be built into every facet of society. Networked communities or regions could run thousands of self-organized experiments and constantly monitor outcomes’ (p.65). On the other hand, for issues that require global management, the system should also operate at a network level. ‘Such as control of technologies like AI and quantum computing, human population, pandemic response, shared resources (water, air, and forests), or climate control’ (p.65).

The new Organizing System will emerge as the global economy changes fundamentally. Present geopolitical relations will disappear; transport of bulk materials across the globe will be substituted by an exchange of knowledge and information through (q)bits, photons, molecules and DNA. Microscopic processes will reign the world, instead of macroscopic parameters. We can see the advent of this in the growing importance of cybersecurity, and the better insight into the role of microorganisms in nature. ‘Which road we take depends on our choices. We have an incredible opportunity to embrace technological progress and create a new Organizing System to help build a healthier, fairer, more prosperous, and resilient world for every one of us. We must take it’ (p.66).

Interesting? Then also read:
Geopolitics of information, the next conflict zone
Manifesto ‘Waltzing with Nature’
Long live Europe, trend 2: organisations will be founded on trust