Leprosy control has a long history. Once upon a time the disease was looked upon as a divine punishment, leading to social isolation. Later it developed into an infection that can be treated well, if discovered timely. Already in 1873, the Norwegian doctor Armauer Hansen proves that the bacterium Mycobacterium Leprae causes the condition. Therefore, leprosy is sometimes called Hansen’s disease. 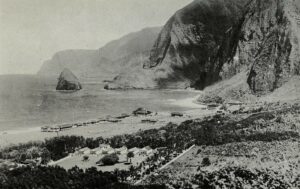 The leprosy bacterium grows very slowly, is distributed through contagion and thrives at 300C. Therefore, people who get infected grow deformations primarily on the colder parts of the outside of their bodies. The disease causes (serious) deformations of the skin and damages the peripheral nerves. The bacterium grows very slowly; incubation time is at least several years, and can be as much as 20 years. Although doubling time is 12-14 days. We don’t have a test that shows leprosy infection; and vaccines do not have much effect. But we do have medicines that work properly.

Modern treatment of the disease starts in 1915, through the admirable and courageous work of Alice Ball (1892-1916). She was trained as a pharmacist and a pharmaceutical chemist at the University of Washington. At the age of 23 she obtains her master from the University of Hawaii. She is appointed as a teacher right away – even though she is an American of African descent. From early on, her passion has been to make a difference to people suffering from leprosy. 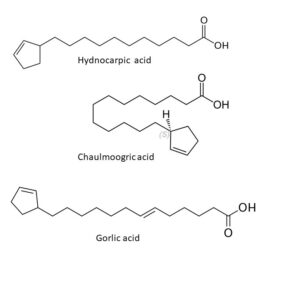 There was an infamous colony for leprosy patients in Hawaii. Alice treats people suffering from the disease with an oil made from the chaulmoogra tree (Hydnocarpus wightianus). This oil, suspended in gum, had been used on the skin for ages in many South-eastern Asian countries. Its action is mediocre and Mrs Ball develops a form that can be injected; she expects this to be better. And she is right in that assumption. The nuclei of the seed of the chaulmoogra tree have a high content of fatty esters; among them some special ones with a cyclic group at the end of a long carbon chain (hydnocarpic acid, chaulmoogric acid and gorlic acid). Alice Ball processes the fatty natural esters into ethyl esters, easier to handle in injections. The British firm Burroughs Wellcome (now a subsidiary to GSK) makes the move to the soluble sodium salt and markets this between 1920 and 1940 under the name of Alepol.

At the age of 24, Alice Ball dies tragically from chlorine gas during an experiment gone wrong during one of her lessons. She didn’t publish her results yet, at that time, and her boss, dean and chemist Arthur Dean, steals them from her. He publishes them under his name, doesn’t mention her at all and earns a lot from her discovery. He even mentions it after himself. One of Alice’s other supervisors, chemist Harry Hollmann, corrects the story of the developments in a publication in 1922. In 2000, the University of Hawaii unveils a plaque for her in front of a chaulmoogra tree at the campus site. But it lasts until 2019 before she is fully honoured. Her name is engraved in the ‘wall of fame’ of the London School of Hygiene & Tropical Medicine, together with those of  Florence Nightingale and Marie Curie; on the spot where from 1929 onwards, 23 learned men have been honoured. Her name also survives in the description of her discovery, as the Ball method. Thanks to her, thousands of patients can start living a normal life again in their old surroundings, freed from the misery of isolation and banishment. 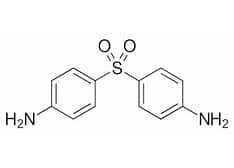 Dapsone, the most effecitive sulfa to treat leprosy.

In the development of antibiotics, we often notice a move from natural to semisynthetic medicines, and finally to fully synthetic substances. We witness this thread as well in the treatment of leprosy. In 1940, the medicine Dapson is introduced on the market; a result of research into sulfas in France and the UK. It had been patented in 1938 already by IG Farben. Until 1960, this is the best medicine for treatment of leprosy; the Ball treatment gets outdated. But pretty soon, resistance pops up, and this restricts the use of this substance. For treatment of leprosy infections, doctors nowadays use combinations of medicines: dapson together with rifampicin and clofazimine.  Dapson is still listed by the WHO as an essential medicine. For a while (2003-2008), dapson shows good results in the treatment of malaria, in combination with the old and cheap antimalarial medicine chlorproguanil. But when a serious form of anaemia appears, this treatment is being discarded. 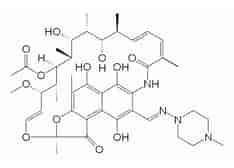 Rifampicin, from soil bacteria and active against leprosy.

Rifampicin and clofazimine are representatives of the large group of antibiotics, discovered or developed after 1950. Rifampicin is the product of the soil bacterium Amycolatopsis mediterranei; it belongs to the family of the macrolides. In 1957, it was found in a pine forest at the Riviera and in 1965, it was marketed by the French company LePetit as a medicine against tbc. Clofamizine is a fully synthetic product, synthesized for the first time at Trinity College in Dublin. Not very effective as a medicine against tbc, as was hoped for originally; but in 1959, Y.T. Chang (National Institutes of Health, Bethesda, Maryland) discovers its action against leprosy. In 1969, the Swiss firm Novartis starts marketing it under the brand name of Lamprene.

Clofazimine, marketed as Lamprene against leprosy.

Where do we stand now?

Did these medicines eradicate this oldest disease of mankind, as leprosy is often called? There is much progress. In the ‘80s of the past century, the number of patients was 5 million. At the turn of the century they numbered 600,000. Now the number has fallen to less than 200,000, of which more than half in India.

This decreasing trend is so promising that in 1991, WHO formulates a program intended to eradicate leprosy in 2000. More precisely: to reduce its incidence to less than one in 10,000. This goal has been reached, but the condition has not been eradicated by far. By the end of 2019, there are 177,175 leprosy patients in the world. That is much less than 1 in 10,000. The downward trend is 1 to 2% yearly. The disease is still endemic in less than 10 countries.