Up to early 20th century, many doctors still believe that susceptibility to tuberculosis is determined genetically. Fierce discussions between professors and parliamentary inquests do not resolve the question: bacterial infection or hereditary condition. When Koch discovers in 1882 that the condition is caused by a bacterium, that doesn’t end discussions. The counter argument is that people are more susceptible when the illness runs in the family. Moreover, it takes a lot of time for an effective medicine to be developed, in spite of all successes of sulfas and penicillins. A serious mistake by Koch makes things worse. He develops tuberculin (an extract of a culture of tbc bacteria, the precursor of the well-known Mantoux test), but this extract causes tbc instead of curing it.

Until the middle of the 20th century, the most important therapies consist of fresh air, good food and hygiene. Health resorts in the mountains and sanatoria in the woods are well-known centres of treatment. In the thirties there still were 41 sanatoria in the Netherlands; and Davos became well-known internationally. Doctors treat patients with all kinds of diets and infrared lamps. In the years 1900-1910, the Dutch medical journal Nederlandsch Tijdschrift voor Geneeskunde lists a very diverse number of medicines and treatments: cod-liver oil enema, hetol, nitrogen, cacodylic acid-sodium, thiocol and sirolin, lingo sulphite, creosote, carbon dioxide, antipyretic agents, urea, lung pouring, vaccine, iodine, mercury, anguifragine and tuberculin. Some treatments are so mysterious that we cannot derive their contents anymore. Tuberculin extracts have been tested a lot as a vaccine or for their immunity propensity.

Surgery is on the rise and doctors try to cure tbc with it. Doctors successfully perform surgery on kidneys and larynx. Back then, surgery of the lungs isn’t a practical possibility yet. Outright scary are reports on surgical treatments intended to decrease the volume of the lungs. As if that would help. Table tennis balls or paraffin introduced into the chest cavity. Air into the belly in order to raise the diaphragm. Attempts to approach the effect of pneumothorax through the removal of a number of ribs. Many reports are not very trustworthy, because of the diversity of treatments, bad reporting and the absence of statistics. Often, so-called successes are based on a very small number of examples, at times very diverse in nature. Nevertheless: in the Netherlands, tbc fatalities fall from 25 to 5 per 10,000 inhabitants, in the period 1870-1940. In 1900, fatalities because of tbc per 10,000 inhabitants are three times as high as fatalities because of lung cancer in year 2000.

Vaccination as the first effective treatment for tbc

The well-known BCG (Bacillus Calmette-Guérin) vaccine was introduced 100 years ago. It is based on a weakened bacterium that causes tuberculosis in cattle. At the Pasteur Institute, Albert Calmette and Camille Guérin work on strands of tuberculosis bacteria for some 5 years, until in 1919 they discover a strand that doesn’t cause tbc anymore in laboratory animals but does incite enough response from the immune system. In 1928, the health committee of the Union of Nations approves the vaccine for application in humans. But because there is much resistance against vaccinations, vaccination on a large scale doesn’t start until after the Second World War; that marks the beginning of the retreat of tuberculosis as a common disease.  One of the causes of the low acceptance of vaccination is the so-called ‘Lübeck disaster’ in 1929, with over 70 casualties. The cause of this event is contamination of the vaccine during its preparation: the section for vaccine preparation and the section where lab assistants work with virulent material have not been isolated properly from each other.

Then, streptomycin is discovered; this medicine, combined with PAS (para amino salicylic acid) appears to be really effective, and from 1950 onwards it is being used (see episode 31 on the discovery of streptomycin). This is being followed up by the discovery of many more medicines, we will discuss some of them. The common phenomenon of resistance to antibiotics pops up as a problem in the treatment of tbc as well. Resistant strains of the tuberculosis bacterium often appear where social conditions are difficult, like in prisons and refugee camps. In 2018, tbc is one of the ten most common death causes. It takes about as many casualties globally as traffic accidents. WHO has formulated as its goal to eradicate the condition permanently by 2050, world-wide.

The most commonly used antibiotics are Isoniazid (INH), Rifampicin, Pyrazinamide and Ethambutol. Treatment will last at least 6 months, and can have side effects. Most treatments take place at home, in combination with measures to isolate the patient.

Isonazid is a surprisingly simple molecule with a very effective activity. We can compare it to the sulfonamides, aspirin and amino salycilic acid (PAS). INH resulted in a complete and lasting recovery of tuberculosis patients for the first time in history. It was synthesized in 1912, but its anti-tuberculosis activity was only recognized in 1945. After 1950 the first clinical applications follow. Accelerated by increasing resistance in the treatment with streptomycin. That was one of the reasons why the medicine was first tested at a large scale on Navajo Indians in Arizona. These suffered much from tbc, and hadn’t yet been treated with streptomycin. Combination therapies, like streptomycin with PAS, still provide the best treatments, and offer more choices now.

The discovery of Rifampicin in 1957 brings to the fore again the Streptomyces bacterium. The name Streptomyces mediterraneus already tells the story. It has been discovered in a soil sample from the Riviera, and it contains the molecule from which a number of rifamycines have been synthesized. They have been in use from 1967 onwards.

Pyrazinamide is a successful analogue of isonazid on the market. It is also a quite effective medicine for primary treatments, in combination with two or more other medicines. It can shorten the period of treatment with several months. 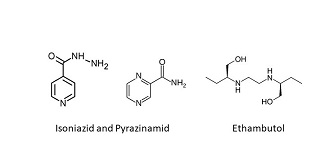 The development of ethambutol announces a new phase in the treatment of tuberculosis. The substance’s structural formula has no relationship whatsoever with the aforementioned medicines. And its mode of action is different; it prevents the construction of the cell wall of the tbc bacterium. But again, it needs to be administered in a combination of several medicines.

The American company Lederle discovers ethambutol in the sixties of the past century in an elaborate screening programme for antibacterial medicines. It’s very effective mode of action surprises them, as does the structural formula, totally different from that of other medicines. This will contribute to the longevity of the medicine; it is still on the market and carried a lot of profit to the Lederle company. All the more so as protection by a patent proved to be quite feasible because of the surprising chemical structure. And for the chemists among us: ethambutol is one of the first entirely synthetic and optically pure medicines. Chemists use several feedstock molecules like the optical isomers of 2-aminobutanol-1 for production of a number of optically pure substances.

In one of the episodes to follow, we will go into the most recent developments in the treatment of tbc, including promising vaccines.

We are excited to showcase our new environmental strategy and vision for Pro Display right now at #ISE2023. Join us in Barcelona to learn how we’re working towards a more sustainable future in the industry. #sustainability #technology #displaytechnology #ProDisplay pic.twitter.com/aQDrxUsu6I