The energy transition has progressed quite a bit. To the extent that we can predict the outcome: renewable energy sources will win. But the real problems are surfacing now. The old energy system and the new energy sources have a scale mismatch. That will prove to be the source of much misunderstanding, conflict, and finally destruction of capital. The energy transition proves to be a real systems change, with scale issues at its heart. 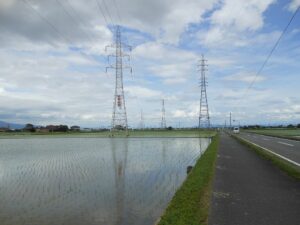 High voltage lines are among the preferred options for utilities. Photo: Wikimedia Commons.

The large and the small scale

It is remarkable how often large scale solutions are being suggested for the problem of intermittent renewable energy production. Super high tension lines running from the Sahara to Western Europe. Or through Germany, from North to South. Large-scale Power-to-Gas installations. As if at night we need to open up major capacities in order to feed electricity from far-away places to needy customers. This fits in the traditional model of central control of the electricity market. Bigger power stations and stronger high voltage lines always used to be the means to transport more electricity, cheaper and more reliable, to the customers. Electricity producers think big. But the advent of small-scale and intermittent energy sources reveals the radical and choices we need to make in scale issues.

On the other end of the spectrum we find equipment that controls electricity demand on the household scale. To the customers, the benefit is that they preferably use electricity as it is cheap; the benefit to the system is that customers don’t overburden the grid. ‘Technically, it is quite common for washing machines, solar panels, refrigerators or electric cars to use smart logic in order to decide on their own at what time to turn on,’ says the site of Dutch technological institute TNO. ‘These devices constitute an important element of future smart grids: intelligent, dynamic networks that adequately control the match between demand for electricity and the supply on the grid of local sustainable energy.’ Still, there are software problems: each producer chooses a platform of his own for control of the devices. But the next step is a virtual system, a so-called EF-Pi, that is layered over the producer’s systems and allows them to communicate with each other. Stakeholders can download such a Flexiblepower Alliance Network (FAN) from www.flexiblepower.eu. As TNO tells us: FAN will solve tomorrow’s energy problems already today. Sure, it can do this. But does FAN actually resolve scale issues in practice already? 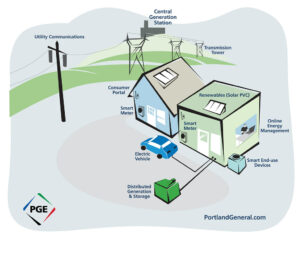 We need to control the grid

Large and small-scale technologies target the same problem: to make sure that supply and demand on the grid will always match. They will have to supplement each other; meet somewhere in between. And make use, at some scale, of energy storage. But then: in what mix of large scale and small scale control systems? The mantra that ‘small may be beautiful, but it is expensive’ doesn’t hold anymore. Small-scale control equipment is still in rapid development; new equipment might turn upside down existing price relationships.

A continuing advocate for the small scale is the Rocky Mountain Institute, founded by Amory Lovins. For dozens of years it has been beating this drum, without much success so far. A recent report summarizes the arguments as follows:
– small-scale alignment of supply and demand will reduce investment in power stations (although this requires adequate planning);
– this will also allow the proportion of renewable energy in the grid to grow;
– this will increase the economic value of the grid;
– planning agents can play into this;
– this will allow consumers to be involved in the process, and that will be beneficial to public support.
The institute shows in detailed reports on scale issues in energy systems how this works. In Hawaii a persistent planning commission played an essential role. In Oregon, the utility itself took the lead in the search for new systems. We wrote earlier about the search for a local energy system on the Danish island of Bornholm. On an island, self-sufficiency might be doable, all the more if it doesn’t host any heavy industry. Even 100% renewable. On the mainland, their solutions may inspire stakeholders. But there, fossil sources will continue to play a role for a long time, and there will always be a certain exchange between regions.

But actual developments might go another direction. A recent article in the Dutch newspaper NRC shows how Google and Microsoft datacentres have bought the entire renewable electricity production in one of the country’s renewable hotspots, the polder Wieringermeer. The tech giants have all the benefits, but now they are a major source of conflict in the polder. Farmers endowed with a wind turbine on their land cash in, whereas others have the trouble but not the fun. Small-scale energy needs backup by the community! Renewable energy is particularly suited for energy collectives. Large-scale projects always run the risk of tearing down local support. Google and Microsoft are now doing well; but they endanger support for the energy transition.

A European 2018 directive requests special support for ‘community energy projects’. But in Germany, attempts to create such social initiatives have been a failure: major companies used ‘stooges’ to acquire such projects. The problem is that there is no clear legal definition of community projects. In Ireland they now try to learn from the German experience. And on the mainland too, there are initiatives firmly rooted in the local community, like in the Dutch village of Terheijden.

For the time being, conflicts are here to stay

Conflicts on control are at the heart of the transition to renewable energy. In the near future, we will witness a conflict that centres on top-down versus bottom-up control. Propelled in part by the development of large-scale or small-scale equipment. Strong local collectives can help surmount scale issues. Like the mismatch between a large and growing demand for electricity, and the small-scale devices in which this is produced. Inevitably, solar panels and wind turbines will increasingly dominate urban and rural landscapes – with a growing potential for conflicts. Renewable sources will win. But the question looming above the present development is: at the cost of how much conflict?