In a first article on renewable energy system costs we concluded that these costs may be formidable if the electricity grid would remain much the same. This could jeopardise the future of renewable energy, and by implication, have major consequences for the earth’s climate. But smart grids may show another way, as exemplified by the experiments that take place on the Danish island of Bornholm, and in many areas in Japan.

This is the second of three articles on the system requirements of sustainable and intermittent energy production. The articles were published on 8 October, 16 October and 22 October 2017. 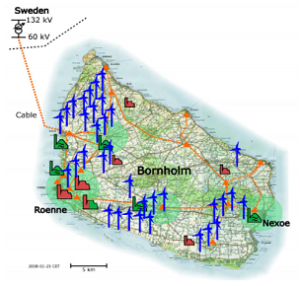 Bornholm (588 km2, pop. 40,000) is a Danish island in the Baltic Sea, close to Sweden. It is much loved tourist resort. The municipal council has set the goal for the island to become completely carbon neutral by 2025. The idea is even to abandon the electricity cable that connects Bornholm to the Swedish mainland. Wind and solar energy are the main carbon neutral energy sources, but the council also decided not to construct any more wind turbines on the island on top of the existing ones, in order to protect Bornholm’s unique nature and not to endanger tourism. Wind energy being one of the cheapest carbon neutral resources, this has made the task much more difficult, and plunged Bornholm’s Energy & Utility into unknown territory.

Smart grids in the making, starting in Bornholm

The traditional answer of electricity companies to imbalances in the grid is to strengthen it: invest in more cables and auxiliary components. ‘However, this is an expensive and an unsustainable solution. We have got alternatives that – to the extent that the regulation of the electricity grid companies allows – can ensure that we are developing an active and self-fixing distribution system, which automatically can solve overloads and deliver reliable electricity supplies,’ says Zaid Al-Jassim of Dansk Energi. Whereas some thirty years ago, preventing excess demand was still done by phone – giving major consumers a call to turn consumption down – in smart grids this will be done fully automatically, also including domestic consumers. On Bornholm, Danish utilities perform experiments with names like IDE4L and EcoGrid 2.0. The latter includes the regulation of heat pumps and electrical heaters in 1,000 Bornholm households, required to stabilise the grid. ‘The electricity grid has undergone a rapid development that will not stop. The price of windmills, solar cells, heat pumps, electric cars and batteries has declined each year. It has been predicted that the price of batteries will have declined by around 30 percent in 2020. This is good news for the climate and the green transition. But the most important element is to keep the grid updated, so it can contain the new additions and maintain a high consistency of supply,’ says Zaid Al-Jassim. Dansk Energi monitors various concepts for smart grids, in order to apply the appropriate solutions to problems that arise, and ultimately to arrive at an active and self-fixing distribution system. And – in the course of the investigations, they also discovered that the island’s solar energy potential is much higher than originally estimated, says Rasmus S. Christensen, CEO of Bornholm’s Energy & Utility. ‘We are doing an in-depth analysis on how to get a better and prolonged uptime through service/maintenance and new facilities.’ And Bornholm is by far not the only area in Denmark that experiments along these lines. The island of Samsø may even be further in its development. 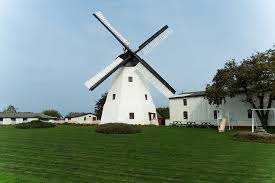 In part, Bornholm owes its attractiveness as a tourist resort to another kind of wind energy.

Biomass energy and battery storage will also be required to keep an autarkic Bornholm electricity system running. A system that is still in the making. Major companies are involved in the experiments, like Siemens and Nissan. Car batteries may play an important role in smart grids. Car batteries and wind energy make a good combination, as the wind mainly blows when electric cars charge (at night); whereas these batteries can also deliver electricity back to the grid when supply from primary sources is low. The combined storage capacity in car batteries may be enough to carry the island through a prolonged period of bad (i.e. cloudy and windless) weather.

Smart grids could lead to a multiplicity of (semi-)autarkic regions

Could the Bornholm system – if it proves to be viable – be useful elsewhere? It will certainly have an impact. For although Bornholm does not have any heavy industry, the successful demonstration of its autarkic energy system may inspire many more regions in the world. Bornholm’s model may particularly be successful in rural areas. In Japan, the aftermath of the Fukushima reactor disaster has led to many villages and regions developing policies to become energy independent. And regional energy autarky does not need to affect industrial areas right away – why would we have to evolve into a fully sustainable energy system all at once? Industry needs much concentrated heat – exactly the energetic quality that can be delivered by (fossil) fuels. We foresee that (heavy) industry will be the last sector to move over to renewable energy. But on the other hand, if a rural area like Bornholm would succeed to become autarkic, why couldn’t many other rural areas become (semi-)autarkic as well? In that case, all at once the electricity grid would be relieved from the daunting task of continually transporting major amounts of electricity – from Spain to Germany and back, depending on weather conditions. Quite to the contrary, the electricity grid’s main function would become to balance the relatively small excesses and shortages in (semi-)autarkic regions, each with their smart grids – it could even have to be sized down instead of up.

According to an MIT study, Europe might be the right place to develop such new smart grids. ‘Components of the solution include back-up dispatchable power, demand response and energy efficiency measures, distributed generation, data-driven smart technologies, grid-level energy storage and more integrated networks. The EU, through its harmonised policy environment, has an opportunity to take the lead on common energy markets and interconnected grids, although technical, political and financial obstacles to this are currently formidable.’ But the study also warns that we will not be able to eliminate fossil fuels from our energy systems for quite some time: ‘until fully clean energy systems become technologically and economically feasible, some level of hybridism will be needed to offset the variability of intermittent renewables.’

And technology does not stop here

Smart grids are still in development. We do not know for sure how well they will work. But we can safely predict that doomsday predictions, as if the electricity grid would break down if solar and wind energy would become dominant, are largely untrue.

Interesting? Then also read:
Solar industry evolves to the TW scale
A common sense or 50-50-40 energy scenario: sustainable energy
Energy storage, its role in the transition