You are here: Home / 2017 / January / Energy storage, its role in the transition

In many discussions on sustainable energy, energy storage is a controversial issue. Particularly non-experts use the lack of simple storage technologies as an unanswerable remark: all nice and well, sustainable energy, but as long as a day without sunshine leaves us in the dark because of lack of simple energy storage, we do not believe in its success. To what extent is this view tenable? Or does it simply represent conservatism or even laziness, relieving us from the need to reflect on all changes that an energy transition would entail?

This is the third article in a series on the forthcoming book by Alle Bruggink and Diederik van der Hoeven: More with Less, Welcome to the Precision Economy. The articles appeared on 30 October and 2 November 2016, and 24 January, 14 February, 18 March and 30 March 2017.

Do we need energy storage?

Let’s put the discussion upside down and ask ourselves if we really do need energy storage. In our energy scenario we showed that sustainable energy might break through much quicker, and at very reasonable prices, than all scenarios predict. True, past energy transitions (turf/coal/oil/gas) slowed down after a quick start, but market dynamics are completely different here. Solar and wind energies are based on mass production. Therefore, harvesting more of them will become ever simpler. Once knowing how it should be done, all one has to do is continuing on the same path forever, albeit in an increasingly efficient way. For even though we do not drive T-Fords any more, mass production of motor cars has never disappeared. Once a house, a village or a region has acquired energy neutrality, it won’t be difficult to install some tens of percent of (cheap) solar panels and/or wind turbines in excess. Depending on supply and demand, and weather conditions, we can turn off equipment. Of course, on the basis of a good (automated) management system and a sufficient number of participants. Many towns, quarters, villages and regions have far-reaching plans to become energy neutral (or have already become so) by energy storage and smart combinations of heating and cooling, daytime and night-time consumption, temporarily turning off equipment versus peak consumption elsewhere. Larger regions will have more opportunities to reach that goal, all the more so if a smart high-voltage network is available. Icelandic geothermal energy as a buffer for North-western Europe is no longer utopic. Millions of solar panels in Spain and the northern Sahara could function as a buffer for the Mediterranean. Likewise the Saudi desert for India. Similar schemes are quite imaginable in Japan, China, the USA and many other countries. 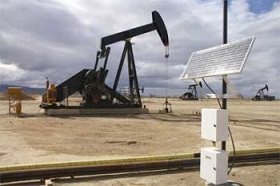 The role of electricity

Once having arrived at this stage, the discussion often goes on with the remark that electricity is just one quarter of total energy use. But it is not hard to imagine futures in which electricity would cover more than half of energy consumption. Heating and cooling electrically is standing technology. We can make smart combinations with hot and cold thermal storage, and this will multiply in the near future. On top of that comes CHP (combined heat and power). Application of electricity in transport can extend well beyond the electric car. Public transport, buses and trains have been electrified to a large extent already. Though it won’t be easy to do the same with airplanes and ships. Existing bulk consumers like the energy sector itself (mining and processing coal, oil and gas) will become smaller or partly start using solar and wind energies as well (see the solar panels by the side of shale gas wells). Industry has many opportunities to shift to electricity as its main energy source. In gas-rich countries like the Netherlands and the UK, it used to be unimaginable ever to do without gas; now this has become a policy goal. In short, energy use will predominantly be in the form of electricity, with a few exceptions like aviation, shipping and some niches.

Nevertheless, in some sectors fuels will continue to dominate. Be it in the form of diesel, gasoline, kerosene or gas (there is no need to be 100% fossil-free, is there?) or a biofuel; but the number of alternatives for them increases rapidly, with (cheap) electricity lurking around the corner again. Cheap electricity will promote the use of hydrogen, and also the application of formic acid (from CO2 and hydrogen) as a motor car fuel. For hydrogen, most cost-effectively produced by electrolysis of water, the availability of cheap electricity is a prerequisite. Likewise for ammonia production as a form of energy storage. Each process that uses CO2 as its feedstock will be promoted by cheap electricity!

Finally, batteries. Will batteries be going to play the leading part in the energy system? Maybe not, electricity from battery might never become as common as water from the tap or gasoline from the pump. But then, the e-book that reads as easily as the paper version is still not there, and yet the bulk of communication is not through paper any more. With the enormous innovation pressure on electric driving, the advent of the cheap, handy and reliable battery is almost inevitable. The battery sector will become a branch of business in its own right with ongoing innovations, reuse, service, recycling of all materials; including upcycling of used electrodes or electrolytes to more expensive applications in modern materials. All this will happen while the need for energy storage will be less felt, as argued above.

The final resistance in the discussion will then be the limited availability of lithium resources for the production of that great number of Li-ion batteries. But even on that point, the objections are mistaken. Firstly, alternatives are on their way already, based on aluminium for instance. Secondly, serious exploration for lithium reserves is of a fairly recent date, with the consequence that present figures may be revised upwards considerably. The amount of commercially available lithium is now put at 14 million tons, identified resources are estimated at 40 million tons, and some even talk of 100 million tons. 14 million tons of Li is quite a lot. Such an amount would probably translate into somewhere between 20 and 30 billion batteries (0.5 kg per battery). Sea water might be an additional very large source. According to Wikipedia, geologists estimate total lithium availability in sea water to be 30 billion tons, based on a fairly constant concentration of 0.14 to 0.25 per million. So far, there is no need to consider recovery of lithium from sea water, but the availability of cheap solar power might change that story.

In sum, those who argue that sustainable energy sources will not be able to make a breakthrough because we do not dispose of cheap and reliable energy storage options, are wrong. Even though the wind does not always blow and the sun does not always shine.