Two factors are underrated again and again in energy policy: the potential of better energy efficiency (check here) and that of renewable energy. In our first column, we saw that important forecasters overestimate demand growth. We foresee global energy growth to slow down considerably. Will renewable sources grow fast enough to reach the equivalence of fossil and renewable energies (the 50-50 point) as early as 2040 (the 50-50-40 energy scenario)?

This is the second article in a series on the forthcoming book by Alle Bruggink and Diederik van der Hoeven: More with Less, Welcome to the Precision Economy. The articles appeared on 30 October and 2 November 2016, and 24 January, 14 February, 18 March and 30 March 2017. 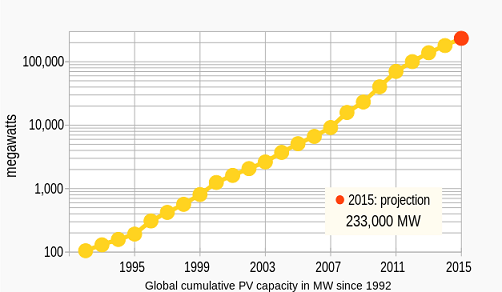 Global PV capacity. Note that the vertical axis is logarithmic: doubling the value means ten times as much capacity. The curve shows an almost uniterrupted rise of 30% p.a.

Will sustainable energy sources continue to grow fast? This is an area of which traditional forecasters have made a mess. They consistently underestimated the contribution of these sources, in particular of solar energy. Shell tells us that solar energy (photovoltaic, PV) will only take off after 2030, rather strange for an energy source that has shown a consistent 30% growth over the past 25 years and a strong and consistent cost reduction. IEA’s track record in this field is notoriously bad. Each year, the agency has had to revise its forecasts upwards. The actual development of solar energy closely follows the agency’s 450 scenario, that would keep CO2 concentrations in the atmosphere below the 450 ppm level. And BP projects a sharp decrease in the growth rate of all renewables taken together, from 15-20% to below 10%. 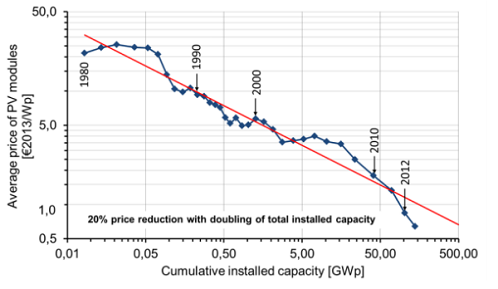 PV module price. please note that the left-hand scale is logarithmic: halving the value means one tenth of the original price.

Major hurdles for solar and wind energies (or not)

BP tells us that it takes a long time for new energy technologies to penetrate the global market, and shows the example of oil and gas that preceded renewable energy. New energy sources need to develop new funding, they say, and this takes time. And equally importantly, the existing energy system, with many long-lived assets and much capital invested, will put a brake on the development of the new system. But we judge that BP is splitting hairs here. Market penetration for oil and gas was difficult primarily because oil companies would have to explore them. Once exploration technologies had matured, these technologies quickly penetrated into the market. But solar and wind energies do not have to be explored. They are here, ready to harvest, so to speak. So as soon as solar and wind energies are propelled by market demand rather than by policies and subsidies (and this is increasingly true), there are no technological hurdles that stand in the way of an accelerated growth.

Nor do we, in the 50-50-40 energy scenario, see major hurdles for solar and wind energies to penetrate further into markets later down the road, as their technologies become more mature. Yes, they will clash with existing infrastructure and its regulations. But there are technological fixes to overcome these problems. And whereas oil and gas production becomes increasingly difficult over time (recovery in oceans, in polar regions, fracking, LNG transport etc.), the reverse is true for solar and wind energies. Mass production is likely to emerge and this will drive prices further down. As industry starts to earn more money, it can devote more funds to developing better devices, once more accelerating growth. Industry will run into materials shortages (e.g. rare earth metals), but so far it has managed to find innovative solutions. Regulatory obstacles will be the most persistent, but in the end these too will give way to market demand. In sum, we judge that market penetration will become easier as market shares grow. In retrospect, the first percent might have been the most difficult one. Sustained high growth rates will turn renewables into the main energy sources within a few decades. 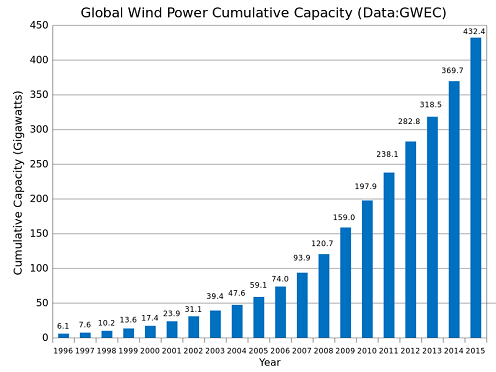 Where will this take us? We cannot produce a full energy scenario. The major scenario builders have tens of staff that work all year on this subject, on a very detailed, sector-by-sector and country-by-country basis. We just point out some important trends that contribute to the credibility of the 50-50-40 energy scenario.
•    Even though solar and wind energies are still very small on a global scale (1% resp. 3% of global electricity production in 2014), sustained high growth rates would change this very quickly.
•    A sustained solar growth rate of 30% would allow PV to cover 100% of all electricity demand (at the 2014 level) in 18 years, i.e. in 2032.
•    A sustained wind growth rate of 15% would allow wind to cover 100% of all electricity demand (at the 2014 level) in 25 years, i.e. in 2039 (but of course, growth rates will slow down sooner or later).
•    Electricity’s share in total global energy consumption is a mere 15% now, so even if 100% of global electricity were sourced sustainably, a lot more would have to be done to reach the 50-50 ratio. But the share of electricity will rise, mainly because of a rise in deployment of electric cars, heat pumps and electronic equipment.
•    Growth of sustainable electricity production by itself will reduce total energy consumption, as it is much more efficient than electricity production from fossil sources: losses in the system will be lower.
•    There are many more sustainable energy sources than PV and wind. Hydropower, that produces 17% of global electricity now, might still grow considerably. We have biomass and biofuels. And solar concentrating power.
•    Low-level heat (by far the biggest slice in the heat market), now mainly provided by fossil fuels, can be provided by solar heat production, partly together with electricity; by heat pumps, with or without seasonal storage; and by geothermal energy.
•    Nuclear energy, that other CO2-free energy source, will continue to deliver electricity.
•    By 2040, new technologies will have been developed, like biosolar cells and blue energy, and new devices to harvest wind energy.

We might see the 50-50-40 energy scenario come true. But that will not be the end of fossil fuels. They will be needed for a long time for specific tasks. Like producing concentrated heat. Or propelling heavy transport. On the other hand, we see no real obstacles to a dazzling take-off for renewable energy technologies, in particular for solar energy. And always keep in mind that better energy efficiency, year after year, is of the utmost importance for the realization of the 50-50-40 energy scenario.