You are here: Home / 2015 / January / The silent miracles of energy efficiency

Energy efficiency is our cheapest energy source, with a very large potential. It has been so for forty years and will probably continue to be so for decades to come. And yet, 99% of energy policy and energy debate is about energy supply. Due to ‘gross inequality not in achievements but in microphones,’ according to the long-time advocate of energy efficiency, Amory Lovins of the Rocky Mountains Institute.

A few months ago, Lovins returned to this subject he has dealt with since the seventies, when he was a whiz kid traveling the world as an ambassador of Friends of the Earth with his pocket calculator, stunning political and business leaders with his unconventional insights. Showing them that enlarging energy supply (in particular by nuclear power) could not by far solve energy shortages as quickly and cheaply as energy conservation. In a column for the Solutions Journal, he once more calls energy efficiency ‘The Secret Revolution’. And his figures completely substantiate this claim. The 2004-2013 shale gas revolution in the US, he notes, saved the import of 10 percent of domestic consumption; but ‘two little-noticed demand-side trends, less driving and more-efficient vehicles, saved 18 percent, nearly twice as much.’ In 2012, better electricity efficiency in the US saved six times as many fossil kWhs as the increase in electricity production from non-hydro renewable electricity generation. 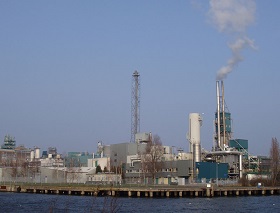 European chemical industry has more than halved energy use per unit of output in twenty years (Albemarle, Amsterdam).

After forty years, the idea that the results of better energy efficiency can be offset against the results of enlarged energy supply still has not got hold of people’s minds. Partly, this is because energy conservation ends up in something not being there. And partly, this is because energy conservation comes in many forms, from lower temperatures in industrial chemical processes (because of better catalysts) to improved home insulation and LED lighting; and on a macro scale, in the form of a growing share of services (that use relatively little energy) in the GNP. Both factors result in energy efficiency and energy conservation being fleeting concepts, hard to grasp. At yet, it can be measured and its results can be calculated. And be compared to the results of enlarged energy supply, because both energy conservation and better energy supply require investments, the payback times of which can be calculated.

On this subject, Lovins thumbs his nose at policy makers who in 1975 fiercely fought his proposition that energy efficiency might get three times as high in fifty years’ time. The Old Testament already asked: how to distinguish false from true prophets? And answers: look at their past predictions, have they come true? Lovins passes this test gloriously. He shows that we are quite nicely on the trajectory he foresaw; in the US, energy intensity per unit of BNP now is about half of that of 1975. And Lovins suggests that energy efficiency might increase again by a factor of 3 between now and 2050. Therefore, he argues that increased efficiency matters. In 1974-2010, the drop in energy intensity was the largest single energy resource in the 11 IEA member countries – ‘bigger than either oil or the combined contributions of gas, electricity, and coal.’ Energy efficiency, he states, ‘has fuelled half the world’s growth in energy services since 1970 – as much as all supply expansions. Who knew?’ 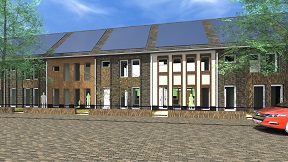 Existing houses can be retrofitted to zero energy homes.

We continue to develop new efficient technologies, and economies become more services oriented. Therefore, the potential of energy efficiency both per unit of physical production and per unit of GDP continues to be very large. How large, that cannot be established with any amount of certainty yet. In Europe, chemical industry has cut down energy use by 20% in twenty years’ time while doubling production; in other words, energy efficiency has more than doubled. And this process has by no means come to an end, as catalysts still develop fast and as enzymatic processes may gradually take over bulk production; both resulting in much lower temperatures and less energy consumption. And there is also a major potential for better energy efficiency in households. In my home country the Netherlands, where badly insulated and draughty homes built after WWII are a major problem in energy conservation, a number of construction companies have finally come up with solutions to turn such houses into zero-energy homes. A typical procedure would be to construct a tailor made second skin around the house – tailor made to the millimetre because the house would have been scanned first. At an expected price of € 45,000 for a single family home, this might be worthwhile for housing coporations and home owners who would not have to bother about energy bills any more during the house’s lifetime. Of course, a good financing scheme would be an integral part of successful propositions.

Quoting RMI’s recent book Reinventing Fire, Lovins argues that the further rise in energy productivity could be led by business for profit. If 75% of the remaining energy demand would be delivered by renewable energy sources by 2050, this would amount to a much cheaper energy system than continuing on the business-as-usual, supply-side oriented pathway. ‘The low-hanging efficiency fruit keeps growing faster than it’s harvested.’ But my prediction is: energy efficiency will stay a much underrated element of both energy policy and energy discussions.