The solar industry is in turmoil. The price of solar panels falls continuously and each year demand grows by 30%. This poses a major challenge to an industry that is quite sizeable already, with an expected turnover of some $ 60 billion this year, and expectations of continued high growth rates for many years to come. Profitability in the sector is quite low, innovations come all the time, industry has to innovate or die. 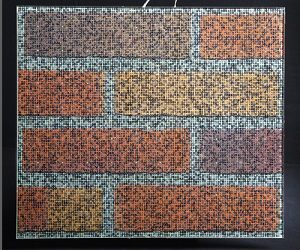 Solar panels are no longer produced in a one-size-fits-all format. They can also look like a brick wall. Photo: Robert Goddyn.

So far, silicon technology dominates, says Wim Sinke of the Dutch research centre ECN. Its competitor, the thin film technologies, have a difficult time; silicon technology is a moving target, cheaper and more productive all the time. And yet in the top-end range, some thin film panels, particularly the CdTe and CIGS panels, come close to the productivity of standard Si panels, now 16-18%. But they find a hard time in competing on price, they need to find market niches or new applications. Therefore, much development work is done on thin film foils, for applications outside the range of silicon panels. A maximum efficiency of some 25% is foreseeable for all panels that are in development now. This will keep the researchers busy for the next 5 to 10 years. We can obtain higher efficiencies, 30 to 35%, by juxtaposition of different materials, like a silicon bottom cell and a thin film top cell. Right now this is the fastest growing subject in PV research. Perovskites quickly evolve into a candidate material for the top cell, their efficiency has grown fast in a few years’ time and their strength is their high efficiency in the visible spectrum, whereas silicon cells are almost perfect in their efficiency in the infrared. But the construction of a stable and productive ‘tandem’ is very difficult, it may take 5 to 10 years before such a successor of present-day solar panels will come to the market.

Solar panels used to be almost identical. Now solar industry evolves into a model with new kinds of panels, specifically designed for special applications. We witness the advent of new colours, forms, sizes, and the aforementioned foils. One example of a new PV application is the car that Audi intends to develop, based on Hanergy’s high-efficiency GaAs cells. At first, Audi intends to use the electricity produced by these cells just for auxiliary devices, such as the air conditioning; this contributes to motor efficiency too. In a second phase, the electricity can be used for driving as well. In the Netherlands, start-up Lightyear is in the process of creating a distinct profile for itself, developing solar cars for daily use. For special applications, most thin film panels offer the advantage of production ‘to measure’, although silicon technology increasingly also offers such opportunities. Another example of special applications are the Solar Frontier CIGS panels, that can be produced in the form of aesthetic construction elements. But the only successful (in the sense of large scale) producer of thin film panels is First Solar, that produces CdTe panels. They exclusively target the market of large scale solar power stations. It is by no means clear where solar industry is heading. A threat to innovation, says Wim Sinke, is a lock-in in standard Si technology because it is so large in scale and so cheap. 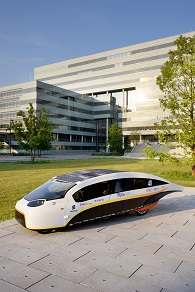 What part can Europe play in solar industry? Right now, China is very dominant, be it on the basis of technology developed in Europe and the US. The starting point in Europe is that we do not want to be technologically dependent on other countries for an energy source that will become dominant. Technological dependence is almost worse than resource dependence. The European Commission drew up an extensive report on this subject; its executive summary has just been published. According to the report, strengthening (reindustrialisation) of the PV production industry is economically very promising, and it can contribute to energy security. Most opportunities arise in the knowledge intensive parts of production, in ‘PV to measure’, and in commercialisation of new technologies. The PV sector itself stresses the importance of keeping intact the entire production chain, and many experts therefore strongly advise to save producer SolarWorld, that is threatened with bankruptcy. Always, starting all over again is much more difficult than saving a well-managed company from bankruptcy. But it is also clear that we need a world-wide level playing field, aspects of which should be clear labelling of quality and environmental impact. We should make out a strong case for this. Europe’s problem though is that we never agree on anything. This is the time to start acting and doing what we need to do quickly, says Wim Sinke. Our knowledge position is excellent, as before. Industry has strong and excellent sectors, but it is very small. Tempress for instance, a Dutch company, has done magnificently well in view of the international competition. And there are several new initiatives for solar industries in the Netherlands: Energyra, PowerField and Innolane, and more are in preparation. Somewhat less one-size-fits-all, rather for different markets and in different qualities and shapes.

We should recognise that solar panel recycling has not been tackled properly so far. Present-day solar panels are designed for eternity, i.e.: no one imagined that one day they would be going to waste. Eventually, a major amount of material will be released, and we do not know yet how we should process this elegantly. At present, panels are simply crushed; the challenge is ‘design for sustainability’, in which panels will be dislodged and the material will be recycled without downgrading. But there is cut-throat competition on the solar panels market, and there is little chance that a new design order that would probably cost money, would be treated benevolently. The exception to this rule is First Solar with is cadmium containing panels, that without a take-back and recycling concept probably would have sold zero panels. By the way, says Wim Sinke, at ECN we research solar panel recycling for over twenty years now, together with some partners. And recently, Greenmatch posted an instructive infograph on solar panel recycling, with the emphasis on future opportunities.

Solar industry is in turmoil. In ten years’ time, solar energy will be the largest and the fastest growing energy production technology. We need to stay on top of the wave, based on state-of-the-art technology, good organisation of the production chain, stimulating policies, and an ample supply of capital. Europe can do this – if it would just choose to do so.