You are here: Home / 2017 / September / Solar energy will soon dominate the energy system

Solar energy (photovoltaics, PV) is no longer that cute but hardly relevant technology of energy supply – it will evolve into the basis of our entire energy system. The world will have to take another look on PV: adapt itself to solar energy, instead of the other way round. We will have to start thinking big and visionary, says ECN’s Wim Sinke. 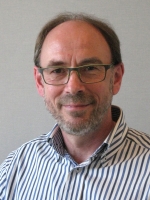 Solar energy to the TW level

Professionals call this development: growing to the TW scale (TW = TeraWatt, trillion watts). Compare: the energy capacity equal to average global energy consumption now amounts to ca. 18 TW; if we only look at electricity consumption, it amounts to 3 TW. When solar energy will come into the (multi) TWs, it will become a heavyweight, all the more because it then will be the fastest growing energy source. If present growth patterns continue, solar energy will hit this mark shortly after 2020, so within 3 years from now; it is expected to hit the 10 TW mark by 2030. 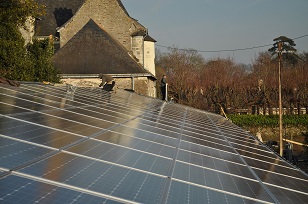 This rise to the TW level has begun, says Wim Sinke. Propelled by low prices, that stimulate major orders, that cause prices to fall even further – a well-known self-propelling mechanism with new and continuously evolving technologies. Now already, tenders are made for large-scale PV projects in sunny climates at 2 $ct/kWh, and experts believe that this could come down to even 1 $ct/kWh, in moderate climates 2 to 3 $ct/kWh (link). This will turn PV into a game changer: it will change the rules of the energy game, and eventually dominate them. In the future, there will be no shortage of solar electricity, because it will become so cheap. At the prices now expected, solar energy will not just produce electricity, but it will also be processed to fuels, heat and materials produced through solar power. The prediction of 1 $ct/kWh is substantiated by a wealth of ongoing scientific and technological developments, breakthroughs in both fundamental discoveries and production technology. At this price solar energy will be fully competitive to all other energy sources. A problem that might arise however, says Wim Sinke, is the economic durability of solar power: the production chain might break at such low prices, if this would preclude some stakeholders from making a profit. In other words: for the sector to grow fast continually, all stakeholders will need to have an attractive, or at least an acceptable business case. 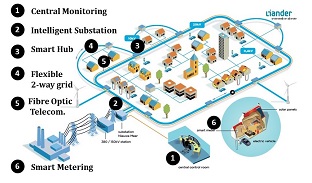 The large scale deployment of solar energy requires the development of a smart grid. Image: Liander.

A major challenge for infrastructure

We do not need to feed all electricity produced into the grid. It is not very likely that we will transport electricity along thousands of kilometres on super high voltage lines. Much of the electricity produced can be used in situ, for instance in the home that carries the solar panels, or in the neighbourhood. Powering large-scale equipment or transporting energy across large distances is more likely to be done through the intermediary of fuels (hydrogen, methanol, methane, or formic acid that is in the limelight these days), produced close to production sites (for instance the Middle East), and transported to major industrial areas in that form. Because of its low price, solar energy will be able to meet any energy demand. Developments in solar energy are severely underestimated, according to a recent article because of statistical definitions. If a coal-fired power station wastes two thirds of its energy and transforms just one third into electricity, its contribution to energy supply is counted nevertheless on the basis of its coal consumption. In the case of solar energy, it’s just the electricity production that counts. All energy experts know this very well, but are policy makers also aware of this? If they see that the solar power bar is still lower than the coal bar, they can comfort themselves with the thought that developments are piecemeal. Because of this imbalance, the solar energy contribution (now: 2% of all electricity generated globally) is much larger already than generally perceived; better put: we have always exaggerated fossil fuels’ contribution.

PV will have a major effect on infrastructure, and the awareness of these far-reaching effects comes rather slowly, because many policy makers are not aware of the speed of actual developments, in terms of market growth, productivity and applications. Growth is much larger than generally imagined. Even in the Netherlands, that has lagged behind for a long time, there could be an installed capacity of 22 GW solar power in 2023, according to Holland Solar, in terms of peak capacity more than all existing power stations taken together. That is in six years’ time. How should we prepare for that? In particular: how should we adapt infrastructure? A basic requirement is to make the electric grid accessible from both sides: suitable for feeding solar electricity into it, ‘bottom-up’, and not just from power stations, ‘top-down’. A major task in itself. The problem is that we should start to adapt the grid now, in view of the speed of developments, but that we should not cast our solutions in concrete because of the large number of uncertainties. When will electric heat pumps start to gain momentum? And electric cars? How much storage capacity do we need? And at what level in the electric grid? One thing seems to be beyond doubt: developments go much faster than most people think [link]. The world needs to prepare itself for a future in which solar energy will be the main energy source [link].

Interesting? Then also read:
A common sense or 50-50-40 energy scenario. Part 2: renewable energy
Cleantech has much more economic potential than just low-CO2 technologies
Energy storage, its role in the transition