You are here: Home / 2020 / July / From solar panel monoculture to multiple land use

Solar energy is rapidly becoming so cheap that it can crowd out other land uses, like agriculture. The farmer may earn a lot more from a monoculture of solar panels than from any crop. But this is an unfortunate development; it may do a lot of harm to the public perception of solar energy. Multiple land use will render the land even more productive; and it may serve both energy and food supply. 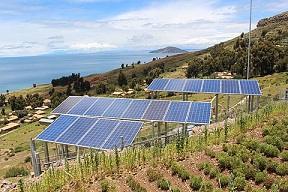 If we construct solar panels at some height, and space them somewhat apart, the land underneath can still have multiple uses.

The case for multiple land use was made on the site of the Rocky Mountain Institute, early this year. If we look upon solar as a competitor to other land uses, this might lead to a new unfortunate round of food vs. fuel debate. But if we should combine the obvious benefits of solar energy with other land uses, farmers and communities might benefit in multiple ways.

One form of multiple land use is in pollinator-friendly projects. Here, we couple solar panels with perennial grasses and wildflowers, which provide habitat for pollinators. This ‘can build soil health, improve local water quality, and boost agricultural yields of nearby pollinator-dependent crops thanks to the increased abundance of native pollinators.’ This may well serve to reduce opposition to solar projects. Even the economics of the project may benefit. Pollinator-friendly areas need less maintenance, and lower ambient temperatures may result in higher solar panel efficiencies.

Land underneath solar panels can also be used for sheep grazing. This will reduce mowing to just once a year. Whereas the sheep owner can use the land for free.

In the Netherlands, at Wageningen University, Friso van der Zee researches combinations of solar energy production and other land uses. Recognising that solar energy production may be a profitable form of land use to the farmer, he suggests to construct the panels at some height and at a somewhat larger distance. This opens up many opportunities for multiple land use. Irradiation and rainfall will better reach the soil; this will promote biodiversity, all the more so if the land underneath the panels would not be fertilized. In peat meadow areas, abundant in the Netherlands, harvesting solar energy could go hand in hand with nature conservation. On water, floating panels might be double-sided: capturing light both from above and from the reflection on the water. But the researcher stresses that much has yet to be discovered.

And in Germany, Fraunhofer Institute researches ‘agrophotovoltaics’: the combination of solar panels and agriculture. They mounted bifacial solar modules for electricity production with some extra distance, 5 metres above the land, which leaves room for tractors to pass underneath. ‘The agrophotovoltaic system proved suitable for the practice and costs as much as a small solar roof system. The crop production is sufficiently high and can be profitably sold on the market,’ says Stephan Schindele, the project manager. Among the first crops tested were winter wheat, potatoes, celeriac and clover grass.

Multiple land use will increase profits and enhance nature

As a rule of thumb, we can put the solar energy harvested in such projects (with panels spaced somewhat apart) at 80% of the maximum yield. But they may be double-faced and then also collect light reflected from the soil. We can also put the agricultural yield at 80% of the maximum yield, as some light is being captured by the solar panels. The sum of these two exceeds 100%, meaning that multiple land use will be economically viable. Fraunhofer Institute also stresses that research is still going on, with various crops, and that it is therefore premature to draw firm conclusions.

And the Dutch province of Noord-Brabant researches opportunities of multiple land use with solar panels as a step in the development of natural areas. How will nature develop in a solar park where the panels are somewhat spaced apart? Can we treat the area in such a way that it can be turned into a natural area in 15 years’ time? While having had a profitable function in the meantime?

All stakeholders warn for hasty conclusions. We need to allow ourselves some time to develop optimal solutions.

Interesting? Then also read:
Multiple use of biomass
Energy producing landscapes
IPBES and after: do we need to fear global ecosystem decline?