The world will have to take another look at renewable energy. We need to start thinking visionary and large-scale. Time is over when solar and wind energies had to adapt themselves to their environment. On the contrary, from now on sustainable energy is actively going to create its environment. Thoughts about energy producing landscapes emerge. According to ECN and Wageningen UR in a joint paper. 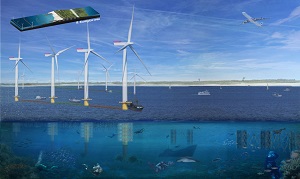 Image: from ECN/Wageningen UR brochure.

Renewable energy has started to grow big. Not just because it is required for a solution to climate change, but primarily because of major price cuts. Solar and wind energies will become cheap to the extent that they will be going to dominate the energy system. Not just in the Sahara, but anywhere in the world, including countries with moderate climates. When solar and wind energies were still looked upon as peripheral, ‘adaptation’ of solar panels and wind turbines to their environment was seen as a challenge. Starting from the viewpoint that they would constitute a ‘disruption’ of the landscape. But that will change. Solar and wind energies are going to be used to such an extent that they will form new energy producing landscapes, even in densely populated countries like the Netherlands. The research question that lay at the basis of the paper by ECN and Wageningen UR ‘Energy transition: A new dimension in our landscape’ is: what will that look like‘.

‘The design of energy landscapes requires an entirely new approach,’ according to ECN’s and Wageningen UR’s experts. Sustainable energy cannot wholly ‘adapt’ to the existing landscape, that is impracticable. ‘We need to create completely new landscapes. Landscapes that are valued by the inhabitants and are economically viable.’ Energy producing landscapes, so they tell us, will form an entirely new layer on top of the existing one, so to speak. The main issue for that new layer is that it needs to add quality. That is a task that should be clear to all stakeholders, and in order to be successful, they should all cooperate: inhabitants, project developers, official bodies, technologists, landscape architects.

Often, multifunctional use of the available space will be the key to the solution. Take wind parks in the North Sea. In order to prevent accidents, intensive fishing will not be allowed there. That is a fine starting point for a quest for other uses of this space. Because of the ban on fishing, these parks will evolve all by themselves into the breeding ground for North Sea fish. Can we enlarge on that natural function? Would such parks be a good location for fish farms, for instance? Would they constitute a fine location for mussels or seaweed growing?

In other cases, energy producing landscapes can be designed smartly. The solar panel in the form of a roof tile already exists. But then of course, the real design challenge is to design solar rooftop panels at minimum prices that actually add some quality to their environment. New colours and new forms open up new opportunities. For instance, solar panels can now be designed to have the appearance of a brick wall. Lately, they are also incorporated into windows. Designers and technology developers favour co-creation processes with the owners and users of the landscape. There are proposals to construct an artificial island near the Zeeburgereiland/ Amsterdam in the BuitenIJ, made from canal dredge and covered with a solar field; this could supply electricity to the neighbourhood and constitute a new habitat for wildlife.

Another opportunity explored by the authors consists of energy producing art, for instance along highways; in contrast to solar panels more or less invisibly incorporated into noise barriers. And of course there is a lot of space that can be embellished by solar panels now already: home and building rooftops. Just in the Netherlands, there are tens of thousands of hectares here, waiting to be used productively. And we have now entered the era when home owners can actually earn money by covering their roofs with solar panels. Our towns, villages and living environment are constantly evolving in pursuit of beauty and performativity – energy transition will add the new dimension energy producing landscapes.

Interesting? Then also read:
Wind energy in the Netherlands: the storm has not yet calmed down
Renewable energy system costs, the untold story
Biobased economy in the polder
Solar energy will soon dominate the energy system