You are here: Home / 2017 / November / Geopolitics of phosphate in a biobased economy

The impact of mineral, fossil and agricultural assets as a weapon in international politics will gradually become smaller, we concluded in three articles. Substitution of critical materials and the development of new technologies play a crucial role in this process. But the geopolitics of phosphate might be an exception. For there is no alternative to phosphate as a resource for agriculture. Therefore it is essential to the biobased economy as well. On the other hand, with smart recycling we might use phosphate again and again.

This is the fourth in a series of five articles on the geopolitics of fossil, mineral and agricultural resources. The articles were published on 28 October, 4 November, 16 November, 26 November and 20 December 2017. 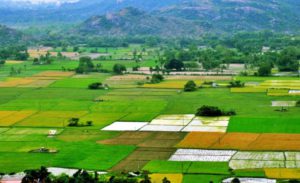 A continuous supply of phosphate is essential to agriculture. Photo: Wikimedia Commons.

Phosphorus is an essential element for life’s processes. It is part of our DNA, it is an ingredient of bone, and it is indispensable in the energy transfer process in living cells. Animals get their phosphorus from eating plants, whereas plants take up phosphorus in the form of phosphate from soil or water; phosphate also being the most abundant source for the element phosphorus. All soils, rivers, lakes and oceans contain a certain amount of phosphate, enough to sustain life. But in commercial agriculture, a constant supply of phosphate is essential. Unlike nitrate, that other major ingredient of fertilizer, phosphate cannot be synthesized from abundant elements like oxygen and nitrogen. It needs either to be recycled (for instance through use of manure) or mined from phosphate rock. Modern agriculture requires increasing amounts of phosphate fertilizer; and as recycling levels are low, the world uses vast amounts of phosphate rock. This puts countries with rich reserves in a strong position in the geopolitics of phosphate.

And the next global superpower is… Morocco

Just five countries host 90% of global high-grade phosphate rock. The three most important ones are Morocco, China and the US, in that order. By far the largest deposits are in the very sparsely populated former Spanish Sahara. The Polisario front waged a freedom war against Spain, until the area was occupied by Morocco in 1976. And although the UN has voiced its opposition against this occupation ever since, it has proved toothless in this conflict; and therefore Morocco will never abandon this area with its riches. As phosphate will become more important over the next few decades, we will also see Morocco’s position rise in the international balance of power. Geopolitics of phosphate has already been played out in 2008-2009, when prices of all minerals skyrocketed and there was a general fear of shortages. In 2008 China imposed a 135% export tariff to secure domestic supply, a move which essentially halted exports from the region overnight, and by 2009 the US and EU had gone to the WTO claiming China was exhibiting anti-competitive behaviour. 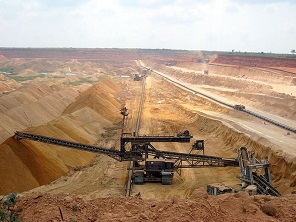 The geopolitics of phosphate even extends to the facts, i.e. to figures about proven and expected reserves. In the same year when China imposed its export tariff, it lowered its figure for proven reserves by 3,000 million tons, quite a lot in a world total of 16,000 million tons. But then, in 2011 Morocco revised its figure for proven reserves from 5,700 million tons to 51,000 million tons, increasing four-fold the estimate of global reserves to 65,000 million tons. There exists well-founded scientific doubt as to the correctness of this move. The revised Moroccan figures for instance, are based on another classification of reserves than the usual one, defined by US Geological Service, where ‘proven reserves’ refer to the amount assumed recoverable at current market prices. Most likely, Morocco just added reserves that would have to be classified as ‘probable’ or even ‘possible’ reserves to its ‘proven’ reserves. As a matter of fact, all countries have their own system of reporting reserves. There is no recognised international body overseeing the estimates of the different classes of reserves, which lends an unusual degree of uncertainty to estimates of phosphate rock reserves. 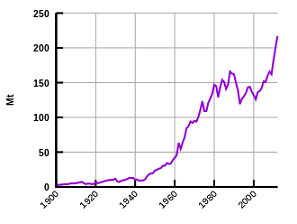 There is no doubt that phosphate recovery will follow the Hubbert curve, like all minerals. According to M. King Hubbert, the recovery of any finite resource will peak when about 50% has been mined, and then fall, however strong the attempts to successfully mine poorer deposits. This theory has proven to be true for individual oil fields, and has been applied to oil recovery in the US and to global oil recovery in general (‘peak oil’). This implies there will also be a ‘peak phosphate’, but there is considerable dispute over the question when this will happen. Dana Cordell, in her authoritative doctorate thesis puts it before 2035, but then notes that this timeline is contested ‘both by industry, which views as it as being too ‘doom and gloom’, and by some peak oil scientists who propose the peak occurred in 1989 and therefore argue that 2030–2035 is too conservative an estimate.’ Peak phosphate will mean that after that date, demand will outstrip supply, meaning that the geopolitics of phosphate would intensify considerably around the peak. But then, we should also note that such ‘peak’ moments tend to get postponed, as uncertainty of supply and rising prices will give rise to intensified prospecting for new reserves, and new discoveries. This has already happened after the 2008 price rise; there are even serious projects to mine phosphate from the ocean bed, in New Zealand, Namibia and Mexico (Baja California), with a total estimated reserve of 400 million tons.

Demand for phosphate is not cast in iron. There are major inefficiencies in the existing phosphate production chain ‘from ore to mouth’ (according to Cordell 80% of the phosphorus mined for food production never reaches the plate). For instance, much fertilizer runs off the land, leaving its content unused and causing eutrophication of waterways. Most phosphate in human excreta is not recovered. According to Prem Bindraban, a professor at Wageningen UR, a phosphor shortage can reasonably be prevented by efficiencies in mining (10% loss reduction), efficiencies in agriculture (20%), efficiencies in the food chain (10%), reuse of manure (15%), reuse of other waste (10%) and changing our diets (10%), allowing a total reduction of 75% of the present level. And in case of emergency, reuse levels might become much higher. That we do not use most human and household animal excreta any more as a fertilizer, is just a result of sloppy organization, stemming from the perception that we could do without them. This is an area where technology might come up with solutions fast, if need should arise.

If we look more in detail, there is a number of issues that could become important as well. Firstly, the distribution of phosphate fertilizer is mainly organized now along the lines of farmer purchasing power. But most soils with very low phosphate contents are in Africa – these need the application of a lot of fertilizer, whereas their farmers are too poor to buy it. If we should wish to feed Africa, we could start thinking about ways to redress this imbalance. Then, with international shipments of agricultural products (particularly feedstock for animal feed), a lot of phosphorus is shipped with them as well. As the phosphorus is not returned, the soil in Brazil and Thailand is depleted with phosphate, whereas for instance the Netherlands is overflown by it. Furthermore, uses of phosphate outside the food chain might come up. Till this day, some phosphate is used in detergents. And one kind of lithium-ion battery researched today is based on the use of much phosphate, maybe up to 60 kg per battery.

Finally, phosphate mining and use are not without environmental consequences. Mining many phosphate resources also produces a radioactive phosphogypsum by-product which must be stockpiled. Like all open pit mining, the mining process disturbs water tables and pollutes waterways. But the most problematic issue might be contamination by heavy metals. These need to be removed, or else mankind will gradually poison its agricultural land. This may already be the case. In the eighties, Dutch research centre TNO developed a process that would purify phosphate ore from cadmium contaminations, commissioned by the Dutch government. But industry had other things in mind. When government lowered the acceptable dose of cadmium in fertilizer, Dutch industry simply substituted cleaner Florida ore for contaminated ore from Morocco, Togo and Senegal. In short, the purification technology was shelved. West-African ore is now shipped to Egypt, where it contaminates the Nile valley and the delta. Problems like these can only be prevented by international action.

From geopolitics of phosphate to phosphorus security

The geopolitics of phosphate could be resolved by international action, if countries would agree on it. This would require action on many levels, as indicated: better mining and purification processes, precision application of fertilizer, preventing losses in the food chain, better waste and manure recovery, less phosphorus-intense diets. It could lead to what Dana Cordell calls ‘phosphorus security’. ‘Phosphorus security,’ as she defines it, ‘ensures that all the world’s farmers have access to sufficient phosphorus in the short and long term to grow enough food to feed a growing world population, while ensuring farmer livelihoods and minimising detrimental environmental and social impacts.’ Would parties intent on waging the geopolitics of phosphate allow us to reach that level?

From our website:
Phosphorus recovery, an urgent matter
Micronutrients, small but essential
Design rules for the biobased economy, #2: be lean on materials flows