You are here: Home / 2017 / October / Geopolitics of sustainability

Geopolitics has long circled around reserves of fossil fuels, the most critical assets in a fossil-based world. But although they will be around for a few more decades, fossil fuels will gradually become less important as a global power factor. What will come in their place? Will energy continue its role in a different form? Will the geopolitics of sustainability and a circular economy announce a new era? Would food and water become new geopolitical factors? And can access to reliable information become a new political weapon? Or technological prowess?

This is the first in a series of five articles on the geopolitics of fossil, mineral and agricultural resources. The articles were published on 28 October, 4 November, 16 November, 26 November and 20 December 2017. 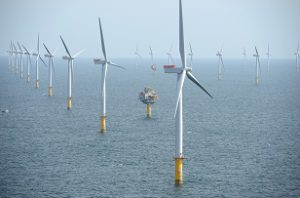 Could the geopolitics of sustainability be different? Photo: Sheringham Shoal Wind Farm.

Geopolitics is the favourite subject of politicians and scholars of international relations. It is about the leverage of one country over others, based on geological factors: the endowment of the country with mineral and fossil reserves, or its strategic geographical position. Often, geopolitics is the decisive factor in international conflicts. The geopolitics of fossil fuels have dominated history for many decades, with the 1973 OPEC oil boycott as a climax and the 2003 invasion of Iraq as a first sign of decline. Minerals also played their part in international conflicts, for instance in the 1879-1883 Atacama border conflict between Bolivia, Peru and Chile, following the discovery of nitrate, silver and copper in the area. A major incident was the 1960-1965 Katanga crisis. Katanga, now Eastern Congo, tried to secede from the newly formed republic of Congo – it holds major reserves of strategic minerals: uranium, radium, copper, cobalt, zinc, cadmium, germanium, manganese, silver, gold, and tin. In fact, the conflicts surrounding Eastern Congo have not died down yet; coltan (the mineral resource for niobium an tantalum) being a new source of many disputes. Another incident was the annexation of the former Spanish Sahara by Morocco (1976) – the area contains by far the largest reserves of phosphate in the world. And the history of the Middle East from 1900 onwards cannot be understood without taking into account the major geopolitical importance that this region owes to its oil and gas.

Fossil oil and gas as geopolitical factor originates from Europe and the USA. In particular the role of America is fascinating. The United States is richly endowed with fossil and mineral reserves, and therefore independent of other countries in many of its resources. But from the 1970s onwards, the USA developed an unprecedented vulnerability in energy supply through massive imports of cheap oil, in particular from the Middle East. A very much undesirable position for a self-declared world leader from World War II onwards. For a few decades, regaining energy independence has been a major drive of US international policy. A goal that it finally reached in the 2010s through shale gas and shale oil. 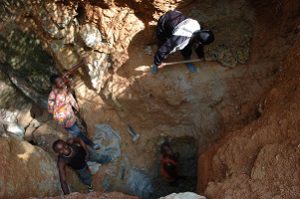 In DR Congo, coltan is mined by many casual laborers in small-scale pits.

A second example is probably China, that has used its strong position in areas like rare earth metals to, at first, contain Japanese dominance in electronics. By now it can exploit this position in a far wider context such as information technology and essential parts in equipment that harvests solar and wind energy. Other countries are much less driven by geopolitics, particularly smaller countries with a trading tradition and/or little or no mineral and fossil reserves, like Denmark and the Netherlands. They rather stress the importance of open borders and free trade. Larger countries with no easily definable material assets like India, Japan and Brazil, struggle to find a successful international policy. Russia, now as ever before, simply continues its place in the international order from an economy based on a wasteful use of its mineral resources.

Can the geopolitics of sustainability be different?

The world is heading towards a more sustainable economy, with a much larger share of renewable energy (available anywhere in the world), with an industry that is more biobased and circular than today, and possibly evolving towards a set of semi-autarkic regions that mainly depend on regional resources. At first sight, such a development might take the sting out of many international conflicts – the geopolitics of sustainability might be predominantly on the peaceful side. But appearances may be deceptive. New energy sources will have new critical components, which may become scarce – particularly if renewable energy sources would penetrate very quickly on the market. If energy prices will keep on falling because of very cheap solar electricity, as we expect, then recovery of oil and gas in difficult geological formations or in remote areas might be phased out – the result being that this will be concentrated in countries with the lowest production costs, i.e. in the Middle East. Will this cause a continuation of troublesome Middle East policies? Or will these countries start to exploit their capital for cheap solar energy as well? And will there be an opportunity for a positive humanitarian development, as these countries might less be in the spotlights of international geopolitical pressure, and might be relieved from their ‘resource curse’ (corruption and a dictatorial regime)? But then, the energy transition as such could be the source of new conflicts, as power positions will shift. Countries might be tempted to defend aggressively a position that is about to erode, or alternatively, rising powers might be tempted to consolidate by force their new position. The Paris Agreement on climate control bears many seeds of potential conflict.

The biobased economy will also need at least one critical mineral, phosphate, that might become a source of conflict as well. In combination with emerging shortages of (clean) water and losses of arable land, the availability of food for an increasing population might become a new geopolitical weapon. In the short run therefore, the geopolitics of sustainability are not necessarily peaceful, compared to the fossil fuel era – but in the longer term, a sustainable world might be more stable because many sources of conflict would have been removed from the international arena.

We will describe a few newcomers in our forthcoming articles. Let us first give attention to the much underestimated role of technology in geopolitical practice. Many analysts do not know much about technology, and tend to judge only by economic factors, that just mirror the actual state of technology. First applications of new technologies, even if they have a major impact, are not necessarily setting the trend for future developments. Technology is always on the move, a movement driven by performance and price, and sometimes by scarcity. I remember the time when analysts told the world that fuel cells would never become important, because driving all cars in the world on fuel cells would require more platinum in their catalysts than available at all in the earth’s crust. But then, technologists succeeded in reducing the platinum requirement one hundredfold and nobody heard any more about this argument. Therefore, in fields so much in turmoil (technologically speaking) as renewable energy and biotechnology, technologists may very quickly find solutions to problems of high prices and availability, particularly if there is much economic or political pressure. Remember, it took Europe just five years to overcome acid rain; and none of the shortages expected in the 1972 Limits to Growth report have materialized so far – maybe precisely because they were expected. We therefore have to take into account that shortages, the source of geopolitics, may disappear, sometimes much quicker than many analysts would have surmised. We might even expect that geopolitics of sustainability in the future might be dominated by technological prowess: countries with better technologies having a leverage over others. Technology to take the place of mineral resources.

A new report on the geopolitics of sustainability

These reflections are inspired by a recent report on the geopolitics of sustainable energy. It gives a comprehensive view on this subject, that attracted little academic and political interest so far; probably because leading academics and politicians have underestimated the future importance of sustainable energy and of the biobased and circular economy.

Written together with Alle Bruggink

Interesting? Then also read:
Micronutrients, small but essential
Precision, the hallmark of a new era
Mining bio-ore for nickel