You are here: Home / 2017 / November / Food and water as geopolitical assets

Can food supply and access to clean water develop into geopolitical weapons, like fossil energy has been for many years? If so, we should see a structural imbalance between food and water on the one hand, and population on the other. But does such an imbalance exist? Will mankind be able to feed 10 billion people without the development of food and water as geopolitical assets, and while restoring natural areas?

This is the third in a series of five articles on the geopolitics of fossil, mineral and agricultural resources. The articles were published on 28 October, 4 November, 16 November, 26 November and 20 December 2017. 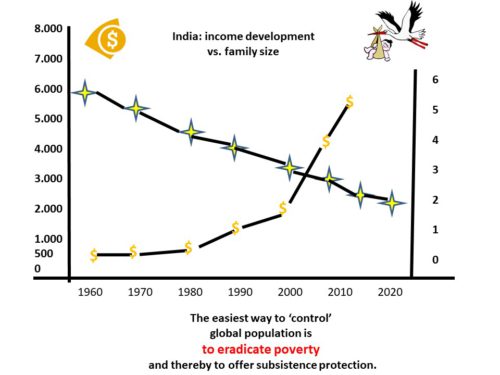 Most people have forgotten Norman Borlaug. He was awarded the 1970 Nobel Peace Prize, fully justified in the light of his achievements. Because of his Green Revolution, the planet can now feed more than 8 billion people. It is responsible for Asia’s present wealth, that in turn has major consequences for global population growth: this slows down fast now! Africa is on the brink of reaping the benefits of the Green Revolution. But at the same time, this now approaches its limits, and we now see more clearly its downside: loss of arable land, inadvertent use of fertilizer, insecticides and pesticides, a shortage of clean water, looming phosphate shortages. And biodiversity losses (remember the discussion on neonics), as well as health damage to farmers caused by insecticides and pesticides. Characteristic for the Green Revolution was the reductionist approach of its subject, quite common in science and industry in the second half of the past century; and a major success as well. The Green Revolution has been executed with just a handful of improved agricultural crop varieties, much fertilizer and quite a number of agricultural chemicals. Almost all agricultural chemicals are simple molecules. Like medicines. Apparently, we did not need a deep understanding of nature, the food chain and society for this success. Of course, this lack of understanding is directly related to the Green Revolution’s shortcomings, and it holds the key for the future.

Unlike oil, food has not been a major instrument for geopolitics in recent times. American wheat shipments to Russia when the cold war was still on, come closest. And the monopolistic behaviour of some producers of agricultural chemicals could fit into this frame as well. But the Green Revolution had as a consequence the relative lack of vulnerability of countries with very large populations like China, India and Brazil to food and water as geopolitical assets (in the hands of major producers like Europe and the US). Moreover, particularly the Chinese and Indian governments have excellent food politics. There may be a lot lacking to the Western eye, particularly in the area of food safety, but then food supply and food safety are a matter of course here. Not necessarily assured for the future, though. 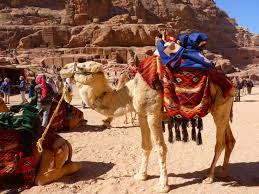 There are many sources of tension in the Middle East, but water supply is no longer a major political stumbling stone. Here: camels in Petra, Jordan.

For a long time, water has been perceived as a potential political weapon in the struggle of nations. The Middle East was the proverbial example. A difficult example, for there is much to quarrel about in this region apart from water, like oil. Surely, nobody will blame the emergence of IS as a political force to a shortage of water or food? The access to a plentiful supply of clean water is a problem of global proportions, to be sure; but we have left behind us the times when closing down water sources or damming rivers would be used as a form of leverage over other countries. Like in other areas, technology plays an interesting role here. Just remember the two American ladies who recently survived for five months in the Pacific Ocean thanks to good water filters. And: water can be reused indefinitely. We talk about clean water here. Each comparison with finite resources of oil, coal, gas or minerals is inappropriate here. Cheap renewable energy and modern membrane technology are the main ingredients for a solution to most water problems. Using food and water as geopolitical assets will prove to be a transient phenomenon.

We know how to feed 10 billion people!

It would take more than the length of this column to explain convincingly that mankind will be able to feed at least 10 billion people from this planet, and have more nature, a cleaner environment and a fairer wealth distribution. The EU all by itself could feed 10 billion people, if all European countries would succeed in using Dutch knowledge and know-how in agriculture and horticulture, and in the production of dairy. That will not happen, but the mere thought of it may put a perspective on people who would try to use food and water as geopolitical assets. Mankind has the knowledge and the know-how to feed 10 billion people and protect the planet from the downsides of the Green Revolution. But in order to make this happen, many changes will have to come about, and that is what worries many stakeholders. We have to move from reductionism to holism. That means: to respect the complexity of nature, food chains and society, while developing precision in growing and harvesting crops. For this task, simple systems are no longer applicable. No more application of the same fertilizer on almost all crops, but dedicated mixtures of fertilizers and growth stimulants for each crop. No more simple molecules as herbicides and pesticides, but smart combinations of biological and synthetic agents, taking into account the very complex microbiome of each plant. The times are past when one single agent would solve major problems, both in medicine and in food production. We need to find solutions that include genetic modification on the one hand, and organic agriculture on the other hand. These new practices will have to be incorporated in a circular and regionally based economy. Big data and their processing will be required to support and direct emerging precision agricultural technologies. Precision in complexity, a major challenge but the opportunity of the future.

Many experts (see Vork, april 2017, in Dutch) hold that policy will have to play a key role in this development. The entire system is supposed to be too complex to leave it in the hands of industry, the agricultural organizations or a liberal economy. We disagree. Precisely in the hands of governments, the use of food and water as geopolitical assets might take precedence again. There are ample international agreements in the fields of food, safety and freedom that assure the safety of this task in the hands of society in all its diversity. The circular and regionally oriented economy will not need such political management either. Governments will have to monitor, and formulate and enforce legislation. Governments are well positioned to take the initiative, stimulate and subsidise; but assigning them the task of restructuring our food chains is risky. Society and the marketplace will have to do the job, and governments may hold us responsible if this should go wrong.

Interesting? Then also read:
Towards precision agriculture with less environmental impact
Vertical farming
Neonicotinoids and bees: a heated conflict even on facts