You are here: Home / 2017 / November / Geopolitics of renewable energy

Renewable energy sources are by nature ready to harvest anywhere in the world, and therefore not a source of international conflict by themselves. However, they depend in part on critical materials – materials of which the supply is by no means assured, particularly if renewable energy should grow very fast. The most important group of critical materials is the so-called rare earth elements. These have been the subject of geopolitics for a few decades already. And lithium and cobalt, important constituents of modern batteries, might become critical elements soon. If it does develop, the geopolitics of renewable energy will centre around these elements. However, in our opinion renewable energy will by far not give rise to as many conflicts as fossil energy has done for many decades.

This is the second in a series of five articles on the geopolitics of fossil, mineral and agricultural resources. The articles were published on 28 October, 4 November, 16 November, 26 November and 20 December 2017. 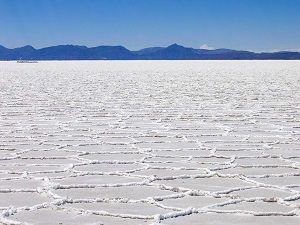 Starting with the latter view: after years of concern about rare earth metals, this spring the Bulletin of Atomic Scientists ran an article Clean energy and rare earths: Why not to worry, by energy analyst Amory Lovins who convincingly argues that the rare earth crisis, that seemed to loom large in 2008-2010, passed away in 2011. He plays the card already hinted at in our previous article: technological change. There are technological alternatives to the most pressing shortages of rare earth metals, he argues. That would be good news: one more source of international tension removed. But let’s make the case for possible rare earth metals shortages first.

Foundations of the geopolitics of renewable energy

Rare earth elements, such as dysprosium, neodymium, terbium, europium and yttrium, are increasingly used, often in the form of alloys, in modern technological equipment: computer memory, DVDs, rechargeable batteries, cell phones, catalytic converters, magnets, fluorescent lighting and much more. They also have many military uses: night-vision goggles, precision-guided weapons, communications equipment, GPS equipment, and other defence electronics. They are looked upon as essential for some solar cells, and for the powerful magnets used in wind turbines. Demand for many of these devices has grown explosively over the past twenty years, and the commercial and political interest in rare earth elements has grown correspondingly. But ironically, these elements are not rare, much less so than noble metals like gold and platinum. The most abundant rare earth element, cerium, is about as abundant as copper. But for a long time, these elements were difficult to mine and use because they mostly occur in dilute concentrations, and are difficult to separate because they are chemically much alike. So it took some time for their applications to develop.

As applications for rare earth elements soared, the world found itself with just one major supplier: China, that acquired a strong position in the geopolitics of renewable energy. The origins of this date back to the days of Deng Xiaoping, who already identified the strategic importance of these elements, and initiated a policy to eliminate foreign competition by selling these metals abroad at very low prices. The last major competitor, the Mountain Pass mine in California, closed down in 2002. Mining and purifying rare earth metals is an extremely polluting business. This is the main reason that most operations in developed countries were stopped when demand was low or slowing down. China reached a milestone in its strategy in 2008-2010, when it blocked the export of rare earth elements to Japan. This stirred fears that China might want to use its leverage over other countries as well, and prices soared. It also inspired a frantic search for rare earth ores in many countries, including Russia, Australia, the United States, Brazil, India, Malaysia and Thailand. However, just two countries – China and Russia – together hold 57% of proven global reserves, while the largest remaining country, Australia, holds a mere 2.4% of global reserves. And China also has a strong industrial position in this field. They not just mine, they also do almost all processing of rare earths. Rare earths mined elsewhere generally must be exported to China for processing and then re-imported (again because of the polluting character of these processes). In this state of affairs, countries may be inclined to hold rare earth elements in reserve for themselves and compete over these resources. 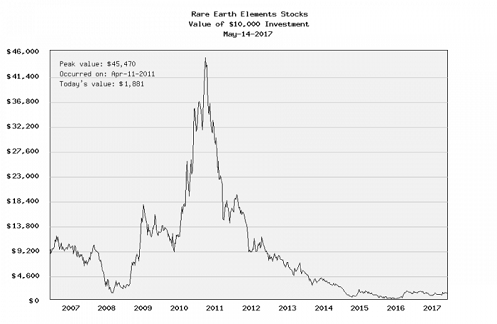 Markets like these tend to be characterized by boom-and-bust cycles, the result of different time scales in the various parts of the production chain. Opening up a mine (prospecting, planning, funding, constructing) typically takes more than ten years. Things become even worse when new, efficient and non-polluting downstream processes need to be developed as well. While changes on the application side, including far more efficient use and better recycling, may be much quicker, as argued before. This is where Lovins comes in. Around 2010, he argues, many commentators warned that China’s near-monopoly on supermagnet rare-earth elements, particularly neodymium, could make the global shift to electric cars and wind turbines impossible. But this claim is nonsense, he continues. Everything that such supermagnet motors and generators do, can also be done by two other kinds of motors that have no magnets but instead apply modern control software and power electronics made of silicon, the most abundant solid element on earth. Somehow, markets got this message. Rare earth prices went sky-high in 2011, then collapsed, and did not recover until now. ‘This is not how a durably scarce and valuable commodity behaves,’ Lovins writes. ‘What happened? Just what you’d expect of a thin market influenced by ignorance but ultimately tamed by reality. When prices soared, stockpiles rose, idle mines reopened, explorers sought and found new deposits, and recycling increased. Most important, as customers from General Electric to Toyota to Ford sought to cut costs and boost performance, the costlier materials were used more frugally and often replaced with cheaper, better solutions.’ Attracted by high prices, Mountain Pass mine re-opened in 2011 but had to close down again in 2015. Another mine, Bear Lodge Project in Wyoming, is about to open, and will take any remaining pressure from the rare earths market, for the time being.

But the tale of rare earths shortages is still around, and it continues to fuel the perception of the geopolitics of renewable energy. Other metals, like lithium, could become critical for renewable energy development as well, because lithium ion batteries are the most powerful devices to help manage the intermittency of solar and wind power. The world’s largest lithium producers are Australia, Chile, China and Argentina (in that order). Bolivia has the largest lithium resources in the world, but these remain largely untapped. If solar and wind power, and electric cars, should penetrate very quickly, lithium shortages might become a real (but transient) problem. There is quite a lot of lithium in the earth’s crust. The most conservative estimate puts lithium reserves at 14 million tons, enough for the production of 20 to 30 billion car batteries, many more batteries than people in the world. With efficient recycling, this might do for a very long time. And then, alternative batteries, based on sodium or aluminium, much more abundant metals, are in development already. It is important to know that any lithium shortage will most probably be a relative, rather than an absolute problem – and therefore not become a serious issue in the geopolitics of renewable energy.

Warning for shortages keep popping up

But warnings for tensions in the geopolitics of renewable energy keep popping up. Indium and cobalt could become critical, according to some. They are applied in solar panels and batteries. China provides roughly half the world’s indium, DR Congo provides more than half the world’s cobalt. Tellurium, germanium and ruthenium are among the minerals that will run into shortages if solar energy should grow into the terawatt scale, says the Energy Skeptic. So would silver. But none of these projections take into account the effect of technological change, that becomes particularly important as soon as shortages loom or prices rise. This is not to say that shortages will never occur and that the geopolitics of renewable energy will never become a serious issue – but we should keep in mind that so far, none of the shortages predicted in the past few decades (including those in the Limits to Growth report) have actually persisted (apart from warfare situations).

In fact, there is just one serious shortage in the world: food – and even this shortage stems from bad organization (primarily from poverty and uneven distribution) rather than from physical limits. Also (access to) clean water might become an important limiting factor, and phosphate – two critical resources for food production. In our next article we will put food, water and phosphate in the context of geopolitics.

Interesting? Then also read:
Stepwise changes, a ray of sunshine in the climate debate
Economists, listen: the earth is NOT a closed system
Technology, no longer a threat