Many social scientists make an appeal to fundamental laws of nature in order to sustain their arguments. Fine, if their interpretation is tenable from a scientific point of view. But often, this is not the case. Economists tend to look upon the earth as a closed system and this gives rise to unnecessary doomsday philosophies. A living system, left to its own, will indeed deteriorate in course of time because of increasing entropy (disorder); but incident solar energy can remedy this and even lead to continuous improvement. 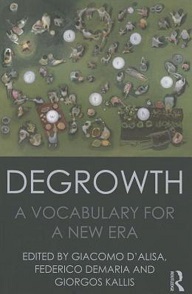 Many economists take a pessimistic view

I read the book ‘Ontgroei’ (Degrowth) with varying emotions. It is a compilation of essays of 56 scientists worried about our economy’s future: mainly economists, some philosophers, sociologists, environmental researchers and just a few molecular scientists. The upshot of it is that we will need to have less affluence, that we need to better distribute our scarce and finite resources, and that the present model of (moderate) growth is bound to fail. The book has the pretence to represent a world-wide platform of concerned scientists. The message is summarised in the title Degrowth. Ironically, the title of the Dutch translation Ontgroei means quite something different – it rather means ‘to outgrow’, i.e. coming of age and mastering the problems that may arise in that process. And incidentally our view on the future, the economy of ‘more with less’, is more in accordance with this title. We need to outgrow our problems in a biobased economy characterised by dematerialisation and sustainable energy. By precision technology, and by production of more goods and services with less resources, less energy and less impact on the land, nature and the environment. Unfortunately, that perspective is not touched upon at all in this book. For instance, the authors hold that dematerialisation cannot go hand in hand with economic growth. Then what about solar energy, we would be tempted to ask. As might have been expected, there is much concern about an ever increasing world population. There is utter disregard of the notion that by alleviating poverty we could solve this problem within one generation. And of the notion that Europe by its own could feed 10 billion people, if present Northwest-European agricultural and horticultural productivity levels could be extended to the rest of the continent. The words have been adapted to the modern age, but there is still the nasty ring of Malthus’s views in the background. We will need to repeat professor Rabbinge’s message over and over again: this world can feed 10 billion people AND take better care of nature and the environment. One and the other can go hand in hand.

Economists look upon the earth as a closed system

Why on earth do economists so often fail in their predictions? We could make lame jokes about this. We could bring to their minds that they excel in explaining events on hindsight; they make the umpteenth correction to their elaborate models, which still predict the wrong outcomes. It would be wise for us not to rely on economists for our future. They cannot cope with disruptions and major technological leaps ahead; they cannot properly value creative minds and most innovations. Economists do not like people in beta R&D who prove them wrong again and again in their trend extrapolations, as I know from experience. But the real problem might be much more fundamental. Two possible explanations come to mind. The first is that in present definitions, economic growth might be too much akin to growth of material flows. Sustainable energy testifies clearly to the fact that we are heading towards a world that will produce more output with less material inputs. By now, there is such a number of technological advances in this area of resource productivity, that they cry out for a better definition of economic growth. In our recent book Green Growth [link] (in Dutch) we also made a plea for an approach on the basis of qualitative, rather than quantitative growth. 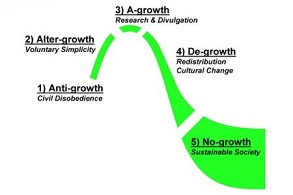 Degrowth is as much a social movement with a specific view on society as a scientific theory.

The second reason might be that economists have false interpretations of physical, chemical and biological laws. Sometimes, economists seem to try to strengthen their scientific claims by suggesting that they use the methods and concepts of the natural sciences. They make cross-references to laws of nature like that of conservation of energy and the physical limits to resources; and they use complex concepts like entropy. In the book Degrowth there are many examples of this. Like an appeal to the ‘fourth’ law of thermodynamics (an entity unknown in the natural sciences); from this they infer that growth cannot be sustained because some resources would be depleted. We could dissect and criticise all such assertions. But let us content ourselves by highlighting one fundamental misconception that is crucial to many pessimistic scenarios. More often than not, economists look upon the earth as a closed system, consciously or unconsciously. They are right if we discuss fossil energy carriers: these do not return in a reasonable time frame after incineration. But fundamentally, that assumption is wholly wrong! The earth is not at all a closed system in terms of our most important actual problem, energy supply and the climate. The sun radiates thousands of times as much energy to our planet than we need for our economy, every day. The question is not: will this source ever be depleted? Or are there limits to the amount we can harvest? The question is: how is the balance, is enough energy coming in and radiated back? And can we control and use that balance just a little bit? ‘Control’ by reducing our CO2 emissions, and ‘use’ by tapping some of that external energy, using it for our economy?

Economists have a poor understanding of natural laws

Many problems arise from an imprecise use of the concept of entropy. In the natural sciences, entropy is chaos, disorder; entropy rises in every irreversible process, and keeps rising unless energy is supplied from some external source. Economists too, use the concept of entropy in the sense of increasing disorder and chaos, like production of waste that cannot easily be reused in economic terms. They use the concept for both material and immaterial processes. Each social or economic endeavour, they hold, needs energy to perform and will lead to an increase of entropy in the form of waste, side products, or whatever these leftovers of our economic activities may be termed. Recycling requires a lot of energy or other scarce resources and is often uneconomic as a result of that. This may be correct in a closed system, but it is false in a system that can cheaply and easily use energy from outside. And solar, wind and water energies will provide us with just that. 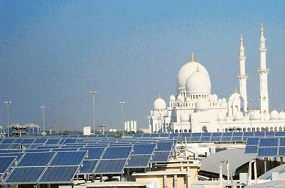 Solar energy in Dubai now is cheaper than fossil electricity.

In Dubai, solar energy now has become cheaper than electricity from oil sold at less than 10 $/bbl. And solar energy has already proven its reliability: there are now solar panels that have produced electricity for 25 years without interruption, and maintenance-free. On top of that, solar energy is the least materials intensive, and will carry the least risk of running out of materials (including the rare earth metals, often quoted by economists). The scenario that energy will become cheap and in ample supply is around the corner. And solar energy can also appear in the form of wind and water energies. Many economists will retort that solar energy will not supply us with materials. But they are wrong at that as well. Powered by the sun, this planet produces 200 billion tons of new biomass each year (from waste), 200 billion tons of new life. In order to feed 10 billion people, we need 10 billion tons of this. (Inter alia, world energy demand represents the equivalent of 25 to 30 billion tons of biomass). All other global materials flows are much smaller. Chemical industry, even though it produces all materials responsible for living affluently, produces less than 1 billion tons per year. Materials that we harvest directly from the earth, like wood and cotton, number about 2 billion tons per year. As a consequence, if the oil from which we produce materials gets depleted, we can revert to nature (or rather to the farmer) to supply us. Agricultural yields are in ample supply: global harvests total 10 billion tons as stated, some 3 billion tons are actually consumed, we can produce all materials that we now produce from oil, from the side stream of 7 billion tons without any problem. And that is exactly what the biobased economy is about. All major building blocks in petrochemical industry can now be produced from biomass. The simplest example being (poly)ethylene from ethanol from sugar beet or sugar cane. The old depreciated (hence cheap) petrochemical installations dominate the market for the time being, but sugar wins if plants are built from scratch, even at present oil price levels. This in itself might be a solid basis for prolonged economic growth. But there is more, much more.

Towards an economy of more with less

The ‘more’ is primarily a consequence of biomass being used increasingly more efficient and smarter. The 200 billion tons of fresh biomass produced on earth each year precisely represent the process of producing valuable materials from waste (the excess of entropy), on the basis of external solar energy. Meanwhile, modern biotechnology teaches us exactly how to use that (fresh) biomass in an efficient food and biobased materials production chain. And we keep on learning from nature. With that knowledge, we can renew our processes and improve upon them. Leading us on the path towards an economy of more with less. If there would be any leftovers, we have the knowledge and know-how to put them to use somewhere else again.