You are here: Home / 2017 / November / Call to ban oxo-degradable plastics 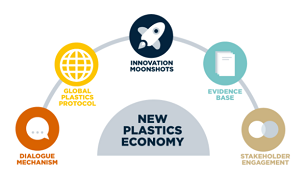 Oxo-degradable plastics, including carrier bags, are often marketed as a solution to plastic pollution, with claims that such plastics degrade into harmless residues within a period ranging from a few months to several years. However, as outlined in a new statement by the Ellen MacArthur Foundation’s New Plastics Economy initiative, significant evidence indicates that oxo-degradable plastics do not degrade into harmless residues, but instead fragment into tiny pieces of plastic and contribute to microplastic pollution, posing a risk to the ocean and other ecosystems, potentially for decades to come. (Oxodegradable plastics contain deliberate weak spots in the long molecular chain, that cause rupture of the chain; for instance as the plastic is exposed to humic acids in the soil, when a polyethylene bag has been thrown away. The remaining (still long) parts have become invisible to the naked eye, but they are still there, and almost non-degradable. The plastic has then turned into micro plastic, DvdH).

“The available evidence overwhelmingly suggests oxo-degradable plastics do not achieve what their producers claim and instead contribute to microplastic pollution. In addition, these materials are not suited for effective long-term reuse, recycling at scale or composting, meaning they cannot be part of a circular economy.” – Rob Opsomer, Lead for Systemic Initiatives at the Ellen MacArthur Foundation.

A global initiative against oxo-degradable plastics

“Using oxo-degradable additives is not a solution for litter. Their use in waste management systems will likely cause negative outcomes for the environment and communities,” said Erin Simon, Director of Sustainability Research and Development, World Wildlife Fund. “When public policy supports the cascading use of materials – systems where materials get reused over and over, this strengthens economies and drives the development of smarter materials management systems. This leads to wins for both the environment and society.”

However, oxo-degradable plastics are still produced in many European countries, including the UK, and marketed across the world as safely biodegradable. Several countries in the Middle-East and Africa, including the United Arab Emirates, Saudi Arabia, areas of Pakistan, Yemen, Ivory Coast, South Africa, Ghana and Togo, are still promoting the use of oxo-degradable plastics or have even made their use mandatory.

To create a plastics system that works, the Ellen MacArthur Foundation’s New Plastics Economy initiative, together with the signing organisations, supports innovation that designs out waste and pollution, and keeps products and materials in high-value use in line with the principles of a circular economy.

Note: Oxo-degradable plastics should not be confused with compostable plastics that comply with international standards and can be safely biodegraded through (industrial) composting.

Interesting? Then also read:
New Plastics Economy: cicular, not yet biobased
Volume of plastics waste in Europe must come down – but how?
Bioplastics: end the confusion