You are here: Home / 2017 / May / Neonicotinoids and bees: a heated conflict even on data

Neonicotinoids tend to have a detrimental effect on bees and other pollinating species – unsurprisingly so, because these ‘neonics’ (at a much higher concentration) are designed to kill insects. But it appears very difficult to gather solid evidence of adverse effects on pollinators’ health. Actually, a dirty conflict on scientific data and their interpretation has evolved in this area. The commercial stakes are high. As happens more often, regulators on both sides of the Atlantic Ocean have made different choices. Which side is right – if any?

This is the second of four columns on neonicotinoids and their possible effects on bees, and on the wider issue of biodiversity and its importance to agriculture. Published on 2 May, 4 May, 15 May and 17 May 2017. 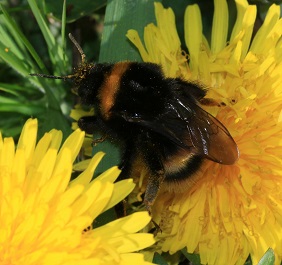 The bumble bee is among the species in decline in many countries. Photo: S. Rae, Wikimedia Commons.

The debate on everything, including the facts

As a life-long environmentalist, part of me is always willing to accept dirty truths about chemical companies and the poisons they sell. I have grown up reading Rachel Carson’s Silent Spring, and it has made a deep impression on me. But as I grew older, I discovered that I was not the only one on which she made such an impression – as a matter of fact, many of her readers must have held important posts in the same chemical companies, and in their regulatory bodies. In fact, the world has responded very much to Carson’s concerns, and developed entirely new and much less toxic pathways to control diseases and pests that threaten global food production. In hindsight, this process has even been unimaginably swift.

Therefore, as I started investigating neonicotinoids and the bees, I was very happy to find someone with the same background as myself, who had done all the hard work that needs to be done in order to establish the truth: going through each of the many scientific articles on the subject, contacting the researchers, and if necessary, asking them nasty questions about their methods, their suppositions, the weaknesses in their conclusions. His name is Randy Oliver. He is a Californian beekeeper and a biologist by training. He has relieved me of the painstaking work that needs to be done when conflicts reach such a level that both sides do not listen any more (like in the nuclear debate in which I participated long ago), when they start to live in worlds of their own, and question every view of the other side, including the facts that they present. A conflict in which NGOs, completely irresponsibly, advertise their cause with the catchphrase ‘save the bees’ (by banning neonicotinoids, of course), and some industrialists have come to refer to their opponents as ‘terrorists’. I was happy to come across someone who kept his mind clear. As a result, I am heavily indebted to, and grateful for the work that Randy Oliver has done.

Causal links are hard to establish

We deal here with an area in which many facts are hard to establish. Although I argued in my first column that honeybees are by far not the only issue, let’s confine ourselves to them for a moment. What’s relatively easy to establish, is the effect of doses of neonicotinoids on insects living in captivity. Here, researchers invariably find substantial effects on health and/or behaviour resulting from high doses – doses that the insects are unlikely to come across in real life. But it is hard to extrapolate these findings to real-life situations. First, the concentration of neonicotinoids in pollen and nectar is bound to be much lower than the lab (typically by a factor 100). Typically, lab exposure to the toxins will also be longer than in nature, where plants blossom just for a short period. Then, honeybees forage over large areas, often up to a few kilometres from the hive. They will find many non-treated flowers on their way. Some researchers have observed that bees prefer non-treated flowers. Then, in captivity the animals cannot deploy their natural behaviour; they may be under stress just because of this condition. Finally, and most importantly, honeybees are social animals. They may be groomed on their return to the hive, which may (or may not) remove contaminated dust. And any contamination that they carry with them, will be diluted in the hive. Field studies invariably show much lower neonics toxicity than lab studies. Some scientists say it may be impossible to establish a clear causal link for the effects of neonicotinoids on honeybees in particular, given their large foraging ranges, the large number of crops that they visit, and the varying concentrations of various neonicotinoids in them. 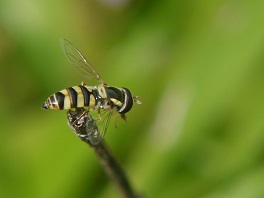 These considerations have led many scientists to conclude that honeybees may not be the main problem – instead, bumble bees (that live in much smaller colonies) and solitary bees may be much more affected. And indeed, their numbers have gone down quite substantially, at least in Europe. Again, this does not prove that neonicotinoids are the culprits. Mites, viruses, moulds and dwindling habitats may be equally important. The same considerations apply to other pollinating insects like butterflies, moths and syrphids, that also go down in numbers. The numbers are serious, but the causes are unknown. Life-long environmentalist Randy Oliver even concludes: ‘Every claim that neonics are causing serious bee mortality is unsupported supposition, not backed by any concrete evidence.’

But I find it equally unfounded to put neonics-related deaths at less than 1% of challenges facing bees as suggests the site Genetic Literacy Project, that operates under the pretentious slogan ‘Science Not Ideology’. By mentioning such a figure (even though it is derived from a questionnaire among beekeepers, not from research), the author presumes that effects have single causes, whereas I gather that in this case scientists agree on multiple causes reinforcing each other. For instance, exposure to neonicotinoids may weaken the insect’s immune system and make it more vulnerable to attacks by vermin and viruses. The insecticide’s activity may be enhanced by other pesticides used by farmers. I have not found one single study, not even from industry, that tries to undermine this hypothesis of multiples causes in which neonicotinoids play a role.

For instance, researchers found that exposure to multiple pesticides has a detrimental effect on bees (highlighted by Randy Oliver). British researchers found that some fungicides ‘have very low toxicity in themselves but may increase the toxicity of some neonicotinoids and pyrethroids by as much as a factor of 1000.’ They also mention that stress caused by neonicotinoids decreased foraging abilities in honeybees and bumblebees; this in turn could then exacerbate nutritional stresses, which again could inhibit a bee’s ability to cope with pesticides, in a cycle. Please note the use of the words ‘may’ and ‘could’ in these sentences. A French study found that the combined presence of the parasite Nosema and imidacloprid led to higher mortality rates in honeybees than one factor or the other on its own. The researchers found this effect at very low doses of imidacloprid, though it was more pronounced at higher doses.

In a neutral environment, it would be very hard already to draw policy conclusions from such findings surrounded with many caveats. In a climate in which positions  have got entrenched (and in which the authors just cited are labelled as prejudiced), it will even be much harder. In such an environment, negotiation becomes impossible, and any decision will be interpreted in terms of gain or loss. As mentioned before, Americans make other choices than Europeans. Does this mean that Americans give way to industrial interests, and that Europeans succumb to NGO pressure? We will devote the next column to this issue.