Floating islands as the lungs of a lake. Made from mycelium, sawdust and turfs made from reed. And island strong enough to carry a person and yet flexible enough to move with the waves. Erik Hobijn designed them and now these interlocked banks are being developed. ‘Floating land made of mycelium’. 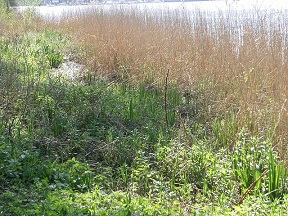 Reeds on the shore of the Nieuwe Meer in Amsterdam. Photo: Mark Ashmann, Wikimedia Commons.

Earlier, we wrote about ecomimicry on this site: restoring nature within the city; with the maximum natural quality achievable. But, we wrote, ‘searching for ecomimicry on internet, one will find many design principles but very few ecomimicry projects.’ We then received a letter from Erik Hobijn who drew our attention to the Interlocked Banks project. An example of ecomimicry in actual practice!

By the way, the designers don’t label their project of Interlocked Banks as ecomimicry, but as anthropogenic design. The project starts with slabs of mycelium with reed growing on them. These form mattresses floating on water, joined to form an open structure that allows waves to slightly move them up and down. New nature within the city. ‘Nobody ever thought of throwing mycelium into the water but we Dutchmen live with the water, we are wet-thinkers, delta-monkeys.’ The system should become resistant to currents and waves.

Reed turfs are common in the Netherlands. They grow spontaneously wherever the water is relatively undisturbed; large floating surfaces. They stimulate biodiversity, both above and below the surface. They act as a lung for the lake. They cool down and protect. They float because of the hollow roots, that also interlock and produce stability. The interlocked banks are designed by humans; but in such a way that nature takes over the project and erases the human design within a few months. 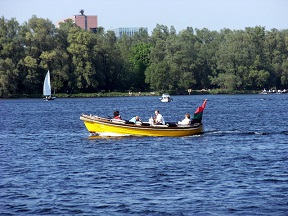 The design of interlocked banks has been inspired by former provo Robert Jasper Grootveld. His islands were still made from polystyrene, EPS, interlocked by many knots. These constructions now float by virtue of the reed’s roots, that also produce the stability of the structure. But the structures are comparable because both are flexible. The ‘mattress’ moves with the waves – unlike the stiff hull of a boat.

‘But I would like to make clear,’ Erik Hobijn writes, ‘that we don’t construct islands but banks. Transition areas are of the essence to ecology; therefore we need to think in terms of phases. Each phase is characterized by an ecological quality of its own; they need to be connected: land, shallow mud, shallow water, deeper water, very deep. To such a system we add banks.’ The project started in 2019; the system is now being tested in the Nieuwe Meer (New Lake) in Amsterdam, with support of the community of Amsterdam and the local district water control board.