Chemistry vs. bacteria, # 28. The success of Bacinol

At the Gist, there are three main characters involved in the successful development of antibiotics. Professor Kluyver as an advisor. François Gerard Waller as the COO. And doctor Andreas Querido. Querido (1922) is by far the youngest. He has been educated at the Pasteur Institute and has started as an internist at the Academic Hospital (AZL) in Leiden. On Kluyver’s recommendation, he is also an advisor to Gist. Because of his Jewish descent, the occupying forces transfer him from AZL to the Dutch Jewish Hospital in Amsterdam.

Project ‘100 years of antibiotics’
Episode 26. Penicillin development outside US and UK
Episode 27. Development of penicillin in the Netherlands
Episode 28. The success of Bacinol
Episode 29. The Gist factory, from illegal to global player
Episode 30. Cephalosporins 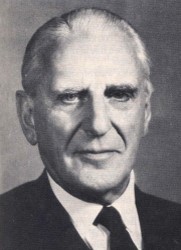 Dr Andries Querido, one of the main protagonists in the Gist story; together with Waller and the professors Kluyver and Westerdijk.

Yeast as a catalyst

In those wartime years, activities are simmering. The company’s strong international position in yeast production suddenly comes to an end. Demand for yeast is low, but nevertheless the reason for the occupying forces to view the factory as indispensable for food production. Government requests the production of vitamin C; this is a welcome new activity, carrying with it new expertise in chemistry and fermentation. The Gist has a first class reputation in research, particularly in fermentation and microbiology and all accompanying areas of expertise (instruments, glass equipment, production equipment). Of course, good relations with Delft Technical University contribute a lot to this state of affairs. In addition to that, the Gist has a tradition in secrecy. The history of the company shows excellent working conditions and a sense of togetherness; these will be of eminent importance in the wartime years. These conditions have saved many employees from forced services for the occupying forces; to which contributed that the company was seen as essential to food supply.

According to Waller’s recount of the story in the company’s newsletter, the Gist starts looking into penicillin in 1943. All information they have at hand then, is an article by Fletcher from 1929. Around Mad Tuesday (September 5, 1944, when rumours are that the allied troops are at the doorstep), they have at their hands, according to Waller, a small amount of a substance supposed to be penicillin. Another source, Elema, puts the start of the research no earlier than 1944. It is supposed to be inspired by a radio broadcast from England; and a leaflet dropped by the Royal Airforce, the Flying Dutchman. The BBC archive shows that they devoted three emissions to the research done in Oxford, with enough detail for informed persons to start research of their own. And there is a radio in the Gist factory. The leaflet dropped probably was the Wervelwind (Whirlwind); a copy dropped in the night of April 24 to 25 contains an article on penicillin. 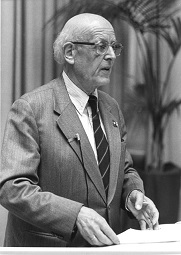 But then, did these exciting events really start the development of Bacinol? Bacinol is the code name for work on penicillin at the Gist. Yes, there is ample historic proof of that. On top of that, the Gist are well aware of most developments, particularly through their close relationship with Kluyver. The major problem may have been to find the right direction for their research without lengthy debates with scores of co-workers.

Chance, serendipity, providence; who can tell?

Anyway, chance continues to play a major part in the developments. One of the very strange events is how the very important article in the Schweizerische Medizinische Wochenschrift  of June 10, 1944 ends up in the hands of the researchers at the Gist, through Querido. The latter, being a Jew, is being interned by the Germans with his wife and baby in Barneveld. On September 28, 1943, they are transferred to Westerbork. But according to the Gist, Querido is an essential co-worker; the occupying forces allow them to keep in touch with him, even during his internment in Barneveld and Westerbork.

On September 4, 1944, the family will be transported to the concentration camp Theresienstadt. But before he leaves, Querido is granted a two days’ leave, among others for a visit to the Gist; his family stays at Westerbork. To his big surprise, he runs into a colleague at Amsterdam Central Station: dr Simon van Creveld. They exchange all pieces of news. To his even bigger surprise, his friend carries an original copy with him of the Swiss magazine with the all-important article on penicillin. He carries it with him to Delft and has a copy made at the Gist; they take care of returning the original magazine to the owner. The Querido family survive the war and in June 1945, he returns to the Gist. After having signed a new secrecy agreement (every precaution made), he is shown the first bottle of Bacinol. 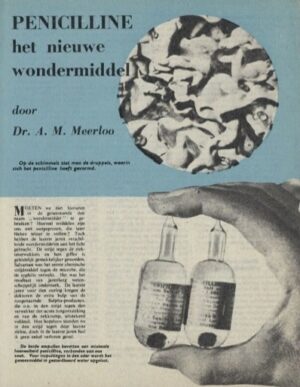 A British flyer on penicillin dropped over The Netherlands in April 1944.

The first reports on work on Bacinol within Gist span the period of March to June 1944. They show how well the researchers were informed, even though there are hardly any references to English or American sources. From January 19, 1944, a steady stream of mould samples (most of them penicillin moulds) goes from CBS to Delft. The CBS offers to supply them for free, but the Gist doesn’t accept this. Results follow at an amazing speed. In three months’ time, they decide on the strain to develop further, Penicillium baculatum Westling. In those three months they also reproduce Fleming’s results. In Spring 1944, they have at their hands a small amount of golden-brown powder with a 50% purity.

Work until liberation in May 1945 is primarily on regular tests. Like tests on mice (among others), searching for the best conditions for a productive fermentation, simpler isolation and purity analysis. Under the circumstances, milk bottles are the best fermenters, all the more as it will not be suspicious if suddenly more milk bottles will be delivered to the factory. But when in August 1944, they have enough of the substance at hand, they get nervous about a possible discovery by the occupying forces. Until the hunger winter of 1944/45, work is being slowed down. By April 1945, the Gist have several ampoules of Bacinol at their hands. But how will it compare to the British/American product?

Shortly after the liberation, the Gist lays its hands on an American sample of penicillin. How did it get there? One possibility is that American penicillin has been dropped with food on Ypenburg air base in May 1945; but we cannot verify this story. Use and distribution then are in the hands of the allied army; supply to civilians is almost forbidden. Another possibility is that penicillin has been supplied by military doctors. On May 8, 1945, Delft is liberated by the Canadian army. We know that their doctors occasionally supply penicillin to local GPs or hospitals for civilians taken very ill. One way or the other, the Gist lays its hand on an American sample. And then they conclude that it is identical to their Bacinol. In November 1945, they put the crown on their work: patient Maria Geene recovers from a life-threatening infection thanks to Gist’s Bacinol.

In sum, in a short time Gist’s motivated team has lain down an achievement that can compare to the Oxford team’s results. Those responsible are primarily Kluyver, Querido and CBS’s Westerdijk. Together with dedicated co-workers from Gist like Waller, Stryk, Stheeman, Rombouts and their colleagues. In 2005, Marlene Burns publishes a thesis on these events; an excellent and well-documented source for the development of penicillin outside the UK and the US.