Chemistry vs. bacteria, # 26. Penicillin development outside the US and UK

In 1943, the allies issue an embargo on all news and publications on penicillin. The subject is declared to be a military secret. But then, the rest of the world has already taken notice of the jubilant press releases in the UK and the US, and the Lancet publications of the Oxford team. How do they react on them? In this episode we will shed light on the developments in Germany, France and Japan. We will go into developments in the Netherlands in a separate episode.

Project ‘100 years of antibiotics’
Episode 24. Chemical formulae
Episode 25. Looking back and going forward
Episode 26. Penicillin development outside US and UK
Episode 27. Development of penicillin in the Netherlands
Episode 28. The success of Bacinol 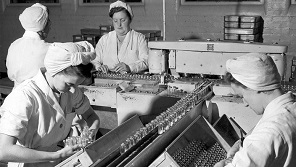 Production of penicillin at  the laboratories of Hoechst in October 1944. Was halted because of allied bombings. Oktober 1944 – Hoechst gelingt die Herstellung von Penicillin, Stichtag – Stichtag – WDR.

It is not until 1943 that the Nazis start paying attention to industrial production of penicillin, prompted by the allied actions in North Africa. In 1944 they organize a conference on the subject in Berlin. Progress is slow, they don’t actually start working on the subject. The wins of war are changing. The Germans have a shortage of about anything needed for any possible development and production, and that finishes the project. Although German researchers have a pretty clear picture of the development. They have access to all relevant scientific articles. They are also in (indirect) contact with international researchers, in particular through Sweden and Switzerland. Domagk and his colleagues involved in the successful sulfa development even do some research. Unsurprisingly, they come to the conclusion that penicillin will not pose a threat to their sulfas.

The mould sample researched by Domagk has been supplied by the Central Mould Culture Agency (CBS) in Baarn, the Netherlands. According to the agency, they receive the first request for Penicillium Notatum by IG Farben/Hoechst (Frankfurt) on June 10, 1942. The agency answers that they have no samples available of Penicillium Notatum. But they will deliver as soon as they can lay hands on the mould. This takes place on September 17, 1942. On that very same day, they also send samples to Hoffman la Roche in Basle, Noury en van der Lande in Deventer (the Netherlands), Alfred Benzon in Copenhagen and the IG Farben location in Elberfeld, Domagk’s office. On further requests of IG Farben concerning other penicillin producing moulds, they answer that they have no knowledge of them.

But then, there is the story that one of Hitler’s doctors treated him with penicillin on several occasions. Particularly after the assault by Von Stauffenberg on July 20, 1944. The penicillin is supposed to have been captured from the allies. And then, remember that Churchill’s life was saved from a life-threatening infection with pneumonia by a sulfa!

As soon as 1946, the allied military power in Germany starts developing plans for local penicillin production based on American technology. In 1950, Hoechst in Frankfurt produces the first kilos, based on a process developed by Merck USA. It proves to be difficult to obtain all equipment and feedstock from Germany. The allies expressly intend to do so, as the project should support both health care and the local economy. 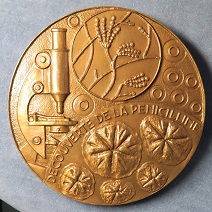 France: medal of honour in bronze in recognition of the Nobel prize for Fletcher. Simmons Gallery.co.uk

France has a long history of bacterial research by the Pasteur Institute; with involvement of well-known companies like Rhône Poulenc and Roussel. One would expect a lot of activity on penicillins on this basis. But the war impeded any progress. Through Spain and the Nether-lands, in the end the French catch up with developments. By the end of 1943, they contact CBS in Baarn; and they receive a sample of the well-known penicillin mould.

The Pasteur Institute houses a mould collection of their own, and together with Rhône Poulenc they start a modest development trajectory; probably from end 1942 onwards. Early 1944, they have a small sample of penicillin (in low concentration), enough for the treatment of a young patient who cannot be treated with sulfas anymore. He recovers, but only partially and temporarily. This is the first penicillin treatment in occupied territory. After France’s liberation, a few months later, distribution and development almost exclusively come into the hands of the allied countries. 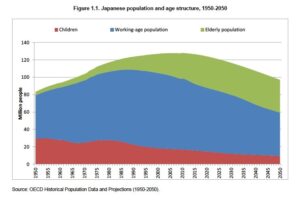 Japan used to prescribe the newest antibiotics until this became too costly because of the ageing population (click to enlarge).

Japan is far away and communication is inadequate. It is logical that developments in Japan take another course. A German publication puts them on the track. In Japan, unlike in Germany, authorities come to the conclusion that they need to stage action at a national level. They call into existence a Penicillin Committee that convenes for the first time on February 1, 1944. Their goal: master penicillin production within 6 months. By May, they have already tested hundreds of strains, and several dozens of them appear to be able to deactivate the dangerous Staphylococcus Aureus. Some of these strains do actually produce penicillin. This defuses the idea that American messages on penicillin’s success would in fact amount to propaganda.

Through the Robert Koch Institute, the Japanese receive more information, and a sample of Penicillium Notatum. But the Japanese come to the conclusion that the mould they discovered themselves is at least as effective. By November 1944 already, they have penicillin of their own at hand. Even under those difficult conditions, they start preparations for production. A year later, in 1945, they have more or less sorted this out; authorities oversee prices and quality requirements. The atom bombs of August 6 and 9 suddenly put an end to this development. On August 26, 1946, the Japanese found the Japanese Penicillin Research Organization, instigated by the Americans. In this organization, authorities, industry and universities cooperate, somewhat to the analogue of successful developments in the US.

This lays the foundation for a successful Japanese pharmaceutical industry. Even keeping in mind that pharmacy has long history in Japan, based on fermentation and traditional medicines. In 1948 already, Japan is self-sufficient in penicillin. In the fifty years that follow until year 2000, Japan will develop more than 100 antibiotic medicines, of which some 40 make it to the global market. Antibiotics developed in Japan belong to all categories. Although there are no examples of specific Japanese origin. On the other hand, Japan is a much sought-after market because of their preference for the latest medicines. Authorities and health insurance companies have the long-standing policy that the newest substances will carry the best effects. It is not until the turn of the century that this policy changes. The reason being that the costs of health care rise fast with a rapidly ageing population.