Formulae are of the essence to chemistry. We make an attempt to tell the story of chemistry versus bacteria in words only; with the occasional illustration. This episode is packed with formulae, with the beta lactam structure as the essence. You might skip the episode, or read it and let the formulae aside.

Project ‘100 years of antibiotics’
Episode 22. ‘America First’
Episode 23. Credit where credit’s due?
Episode 24. Chemical formulae
Episode 25. Looking back and going forward
Episode 26. Penicillin development outside the US and UK 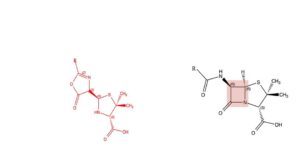 Fierce battles have been fought on the question of the formula of penicillin; most of the participants were or were later to become Nobel Prize winners. The dispute takes place between 1940 and 1949. Ernst Chain (Nobel Prize 1945) of the Oxford team does the vast majority of the preparatory work; he establishes that the compound cannot be an enzyme or a protein. In his judgement it is likely to be a relatively small molecule consisting of the elements carbon (C), hydrogen (H), nitrogen (N) and oxygen (O). It is a big surprise to many that it also contains sulphur (S). Together with Edward Abraham he proposes a beta-lactam structure fused with a five-membered ring. The formula to the right, in black. The group R can have several structures, see later. The four-membered ring, in the coloured surface, is quite surprising. It is a so-called beta-lactam and at that time it is virtually unknown. Moreover, chemists expect substances with such structures to be rather unstable, not able to withstand temperatures above 0oC. They cannot believe that nature, a mould for heaven’s sake, can synthesize a molecule like that. Robert Woodward (Nobel Prize 1965) is convinced that nature is quite capable of doing so. Two other Nobel Prize winners, Robert Robinson (Nobel Prize 1947) and John Cornforth (Nobel Prize 1975) cannot imagine it and propose another structure; the formula to the left, in red. They do agree on the right-hand part of the structure, the the thiazolidine five-membered ring. As an alternative to the improbable beta-lactam 4-membered ring they propose the stable 5-membered oxazolone ring. 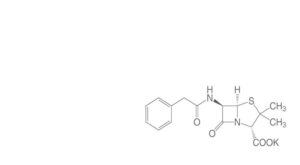 Another Nobel Prize winner needs to enter the scene in order to settle the dispute. But that requires Chain to come up with very pure and crystalline penicillin. Together with Dorothy Crowfoot Hodgkin he succeeds in producing neat crystals of the sodium, potassium and rubidium salts of Penicillin G (see formula). In 1945, the X-ray photograph of these crystals shows the correct answer: penicillin contains the beta-lactam ring fused with the 5-membered ring. Back then, it is the largest organic molecule of which X-Ray and Röntgen photos have established the structure. But at the end of WW II, penicillin is almost a secret substance, and publication of its structure doesn’t take place until 1949. That allows Robinson to adhere to his faulty structural proposal a few years more. In 1964, Dorothy Hodgkin is awarded the Nobel Prize. Margaret Thatcher, who was a student of Hodgkin’s, later hangs a portrait of her in her study, as proof of the careers attainable by women. 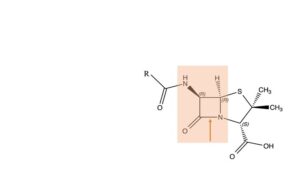 Now, 75 years later, we know precisely, down to the atom, how the molecule works. How and why the mould synthesizes the penicillin skeleton from three amino acids, L-α-amino-adipic acid, L-cysteine and L-valine. We know where the codes for these amino acids are situated on the mould’s DNA; and where the codes are located that encourage the three amino acids to form the penicillin molecule. Group R can have various structures, depending on the specific mould in question. We know at which location penicillin takes on the bacterium and how the latter kicks the bucket, step by step. We know which arsenal of defence mechanisms the bacterium has to its disposal, or how it produces them, and how they operate. The main structure involved in both processes is the beta-lactam bond, indicated with the red arrow. The penicillin molecule starts its attack on the bacterium by opening up this bond; the ends attach to the bacterium’s cell wall. This operation results in a hole being pinched into the cell wall, and the bacterium losing its lifeblood. But resistant bacteria tackle the very same beta-lactam bond; with help of an enzyme that they have learned to produce. They do so before the penicillin can finish its demolition of the cell wall. Later we will discuss Clamoxil (Augmentin), a combination of Amoxicillin and Clavulanic acid, and show how science developed an answer to that problem.

In that same battle against resistance and infection, chemical scientists have made all sorts of changes in the penicillin molecule. Actions quite like those of nature itself! Anything seems to go, but one component of the structure remains intact at all times: the beta-lactam 4-membered ring (the red area in the formula). In course of time, researchers make much progress in the development of beta-lactam antibiotics. Like the following (not exactly in chronological order).

Researchers substitute dozens of groups on location R, also the site of many natural variations; this produces the well-known semisynthetic penicillins. We will discuss more in detail later the two most important representatives, Ampicillin and Amoxicillin. The most well-known natural penicillins are Pen G and Pen V. 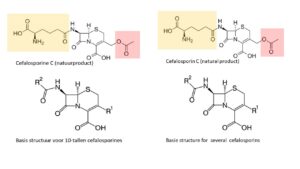 In 1948, researchers find the Cephalosporin mould in a Sardinian sewer, and this opens up a new playing ground. In 1958, Edward Abraham and Dorothy Hodgkin establish its structure: nature has substituted a 6-ring for the 5-ring in penicillin. This change enables the molecule to take in even the bacteria that had learned to break up the beta-lactam bond in penicillin; for the 6-membered ring prevents the resistance enzyme to capture the beta lactam bond in the cephalosporins. New semisynthetic antibiotics originate when changes are made in the side chains (indicated in coloured areas in the natural molecule Cephalosporin C): an almost endless variation in other groups can be substituted at locations R1 and R2. This leads to well-known products like Cefalexin, Cefadroxil, Cefaclor, Cefamandole, Cefixime and Cefotaxime.

But we have never succeeded in beating nature through the development of a cheap synthesis of penicillin in the lab, although much work has been done on this. The researchers may have been challenged by the easy synthesis of the sulfas. In the early years in particular, several industries don’t embrace the complicated fermentation, convinced that someone will discover an easy synthesis soon. In course of time, researchers do indeed succeed in synthesizing the 4-membered beta lactam ring, but all such processes are much too expensive in industrial practice. The main warrior on this point is the American chemist John Sheehan. He succeeds to synthesize the natural compound Pen V in the lab. But all attempts to synthesize the 3-amino-beta-lactam ring have remained scientific curiosities without any commercial prospect. 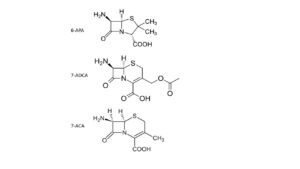 Our insight into nature’s modus operandi advances very fast; that also increases the opportunities for better biosyntheses. Scientists quickly succeed in transferring the genetic information of penicillin to yeast cells; subsequently, these produce much penicillin, well and cheaply. Sheehan’s work does result in the industrial availability of three important building blocks for almost all penicillins and cephalosporins: 6-APA, 7-ACA and 7-ACDA. They are more stable than most end products, because they are amino acids (and stabilized because they contain a Zwitter ion). 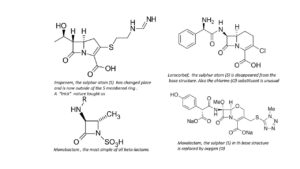 In the development of beta-lactam antibiotics, for a long time researchers don’t touch the 5-membered ring (in the pens) or the 6-membered ring (in the cefs). But then, as they find more resistance in bacteria, they develop an almost endless stream of new molecules. Only the 4-membered beta-lactam ring remains intact. The simplest of these molecules is monobactam, a substance with little clinical success; others have very complicated structures with large side groups. Some substances are clinically successful, like Loracarbef, Moxalactam and Imipenem. The latter substance is a derivative of the natural compound Thienamycin; its formula shows another natural variation on the penicillin theme.